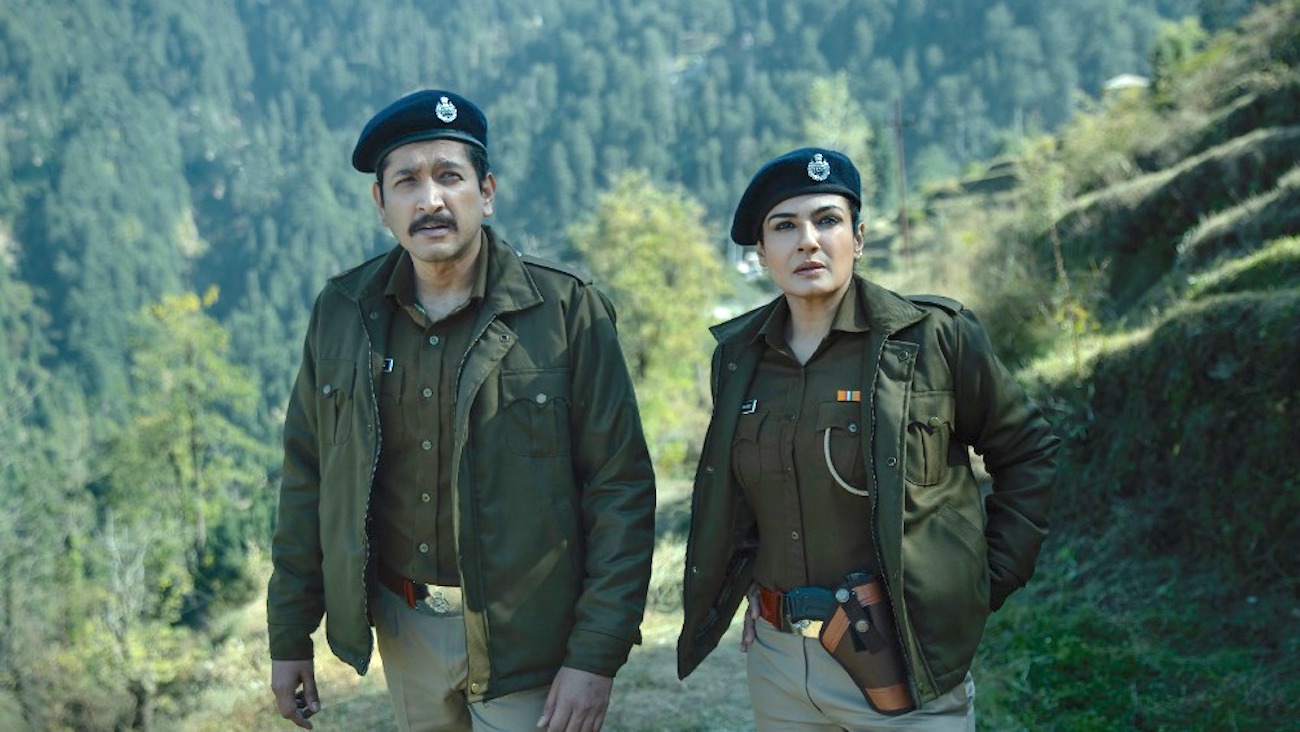 “Aranyak” is an 8 episode police investigative crime thriller that is streaming on Netflix now. “Aranyak” is written and produced by Rohan Sippy and is set in a fictional town in the forest of Himachal Pradesh..The tongue-twisting word Aranyak is derived from Sanskrit meaning “of the forest.” There is a Bengali novel with a similar name from 1937 penned by Bibhutibhushan Bandopadhyaya but the crime series is not based on the book.

Premise: Although the first episode was a bit difficult to get into, you glean that a teenage foreign national Aimee (Anna Ador) is raped and murdered in the forest. A new inspector Angad malik (Parambrata Chatterjee) is given the charge to investigate this gory crime. Kasturi Dogra (Raveen Tandon) is on a one-year family leave. But when she learns about the link of this crime to a previously unsolved mystery, she returns to duty.

What works: The haunting atmosphere about a myth of a “Leopard man” in a sleepy little town in a forest. The actual shooting was done in the Kullu/Manali area, which I would like to visit but now I am worried about what happens in the resorts and cyber cafes in hill stations after watching Aranyak. The tension evolves to a comfortable camaraderie of sorts between the two police officers. I will be keeping an eye out for Parambrata Chatterjee. His acting was restrained and emotional at the right times. Very natural. Raveena Tandon looked familiar but since I have not seen the popular mainstream actress of the 90s in a while, and also because her face somewhat resembles Twinkle Khanna, it took me some time to recall who she was. She is comfortable in her role and is able to navigate her disturbed family life, teenage daughter’s saga and covert rivalry with the new male officer on the block. I did not care for her to go about slapping rounded suspects for interrogation. She does not seem to be getting too much “dhamaka” on any front in this season, despite her star status and that is good. Both leads are in almost every shot.

What it exposes: Bureaucracy, corruption at every level. The good, bad and disparaging relationship between teenage children and their influential parents, the rampant lawlessness among government officials. The difficulty law enforcement faces to bring them to justice. The fact that children are not safe anywhere.

What is confusing: Too many subplots and a web of suspects, that is unraveled rather too quickly.

Will there be a second season: I doubt it. It’s a wasted opportunity of sorts.

What it strives for: Other more polished crime series like “Family Man Delhi Crime” (which I have seen) and “Paatal Lok” (which I have not). “Aranyak” is said to have a similar plot as “Mare of Easttown,” a 2021 HBO Max’s police investigative series based in rural Pennsylvania.

Take home message: Better keep it simple without falling prey to the old Bollywood-style bag of too many tricks.