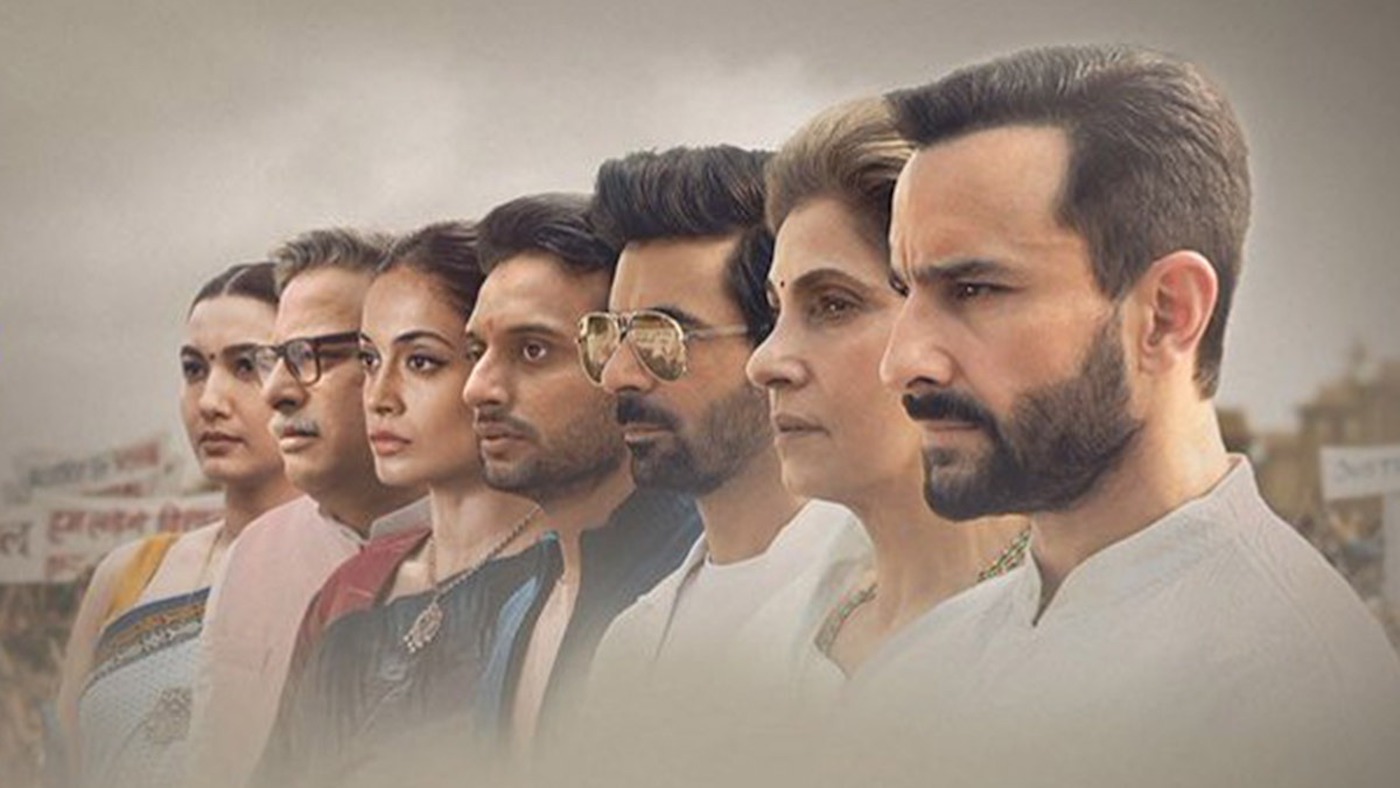 Ali Abbas Zafar’s political thriller ‘Tandav” has been embroiled in controversy since its release on January 15 on Amazon Prime making this the latest show in a recent string to land a streaming service in hot water.

The charges being levelled by India’s Hindu nationalists against the director, producer, writer and the cast of the now controversial web series is one we are all getting familiar with — allegedly hurting the religious sentiments of the Hindus and promoting religious enmity between groups. Amazon India Originals head Aparna Purohit has also been named in the suit.

The main scene that caused all the trouble was in the first episode which featured actor Mohd. Zeeshan Ayyub performing a college play. The scene shows him wearing a pantsuit, holding a damroo and saying “Azaadi, what the F***,” while essaying the role of the Hindu god Mahadeva (another name for Lord Shiva). Protestors feel the sequence insults the Hindu deity Shiva, which has caused an uproar.

Some viewers took to Twitter to demand a ban on the series. ‘#BanTandavNow’ started trending.

Celebrities like the very vocal Kangana Ranaut and others also jumped on the ‘Tandav” bashing bandwagon, slamming the makers for depicting a Hindu God in a bad light.

Multiple cases have already been filed against the makers in Maharashtra, Uttar Pradesh, and Madhya Pradesh on similar charges.

Expressing objection to the web series, Maharashtra Karni Sena Chief told the media, “We will give Rs. 1 crore reward to anyone who slits tongues of those artists who insulted Hindu gods and goddesses in the web-series.”

Many other political leaders like Mayawati, Kapil Mishra have also condemned the show for “insulting a Hindu god.” Many have also called it “anti-Dalit and full of communal hatred against Hindus.”

Is there merit in the allegations? American Kahani asked a cross-section of readers and avid fans of Bollywood to weigh in.

Connecticut resident Binod Dahal, a Bollywood event manager says, “I happened to watch the first episode of “Tandav” at a friend’s place. As the series progressed, right from the beginning, it had an air of intensity. I could feel that the makers wanted that punch to keep their audience glued to the screen.”

Speaking to the controversy, Dahal adds, “I watched Zeeshan Ayyub perform the scene in a modern avatar,which was a bit far-fetched and unlike most of the plays which feature Lord Shiva. The lines used were a bit uncomfortable to watch making me question if the directors’ sole intent these days is to create controversy and mark their success by the controversy they generate.”

Acknowledging that religion is a sensitive subject in India, Dahal adds, “More often than not, companies have picked up stories where they seem to definitely have an idea about the line they would be crossing if the piece gets released to the public. But they go forward with it to get the attention whether good or bad.”

Giving examples to prove his point, Dahal adds, “People had complained and “Padmavati” was changed to ‘Padmavat’ during its release. “PK” starring Amir Khan dealt with a somewhat sensitive issue most people seemed to be okay with it later on, even though there was some noise after it was released. I think any creative piece in the market is made for purely entertainment and even though that is the sole purpose of the piece, history and religion when distorted or presented in an inappropriate manner can give a false impression to people.”

Speaking about “Tandav,” Dahal says, “The way VNU has been chosen to represent JNU and the way lines have been delivered, including the lines of the first episode which sparked the outrage, the series certainly would benefit from censoring a few scenes which I heard they are already doing. I wouldn’t go as far as to prosecute them or arrest them as is being suggested. The company making the series, definitely should rethink the few lines and the way certain scenes are portrayed. It almost appears as if they were added not for entertainment but to create controversy from the beginning.”

Alpana Varma, a Florida-based writer and mom, says, “I can’t remember anything offensive about the first scene. People just like to stir up controversy these days and cause disturbance. In the name of religion and communal harmony, any excuse is enough these days. Really sad. I really liked the series because it seems so close to reality.”

IT specialist Anupreet Alhat, an avid connoisseur of movies, also found nothing objectionable with the series and pooh-poohed the ruckus it was raising in India. “There is absolutely nothing offensive about the series, it is just the politicians and narrow-minded guilt-mongers, who do not want the truth coming out about what exactly is happening in society today and how the system works.”

Alhat truly believes that all this chaos is no big deal. “Indians should stop taking Kangana (Ranaut) seriously or even putting their time in reading her words. Irony is people get offended by movies and series, but they are just blind to terrible real-life happenings because it does not affect them personally. In fact, the series depicts the discrimination happening now, and nothing has changed,”

An incredulous Alhat adds, “There was a time when movies like “Jaane bhi do Yaaron,” “Ram Teri Ganga Maili,” “Bobby,” “Krantikari” would show actors like Amitabh, without any hesitation, enter the temple drunk and question God. Imagine such movies hitting theaters in today’s time!”

Alhat, who is looking forward to the show’s second season says, “It is a simple series. Let us enjoy it like that.”

Dr. Avanti Gokhale, Associate Professor at Emory University, Atlanta, who loves movies – Bollywood and Hollywood, says, “I did not think twice about the scene until the ‘backlash’ from ‘Hindu activists’ was given a voice.”

Gokhale, who is appalled by the deeds being done in the name of religion in India by “Hindu bhakts” says, “First and foremost being a Hindu myself I can unequivocally say that these activists do not speak for all Hindus.”

Gokhale asks, “I wonder if the outrage would have been this magnified or vocal if the so-called offenders were not Muslim. And why are the Hindu-right so insecure about their faith that a five-minute portrayal of a modern-day Shiva rattles their sentiments?”

With an air of finality, Gokhale says, “Interpretation, adaptation and evolution are the reasons that Hinduism has sustained for 5000+ years. What the Hindu-right are screaming about makes them no different than the Charlie Hebdo assassins. They are mimicking the worst qualities of their sworn enemies. And finally, I am more likely to support the #BanTandavNow not for the anti-religious sentiment, but because the series was utterly unimaginative and a total waste of my time. If only the storytelling was as crisp as Dimple’s cotton saris! Alas, the freedom of expression allows us the freedom to bore one to death.”

IT professional and New Jersey resident Kanchana Govindan, who saw ‘Tandav” in its original form says, “It’s ironic that the scene where an actor was further depicting an ‘actor’ on a stage play can be construed as representing anything even remote to a god/goddess. If this is the case, every person who has ever played a god character in serial/ movies etc. should be worshipped in real life. When we do not do that, then why only take this out of context and not go with the flow and theme of the story.”

A confounded Govindan adds, “If this is construed as hurtful, so is naming every terrorist in a movie with a Muslim name, but we don’t seem to have an issue with that. In my opinion, this is selective intolerance. It goes against the fundamentals on which India is a democracy — secularism, freedom of speech and tolerance. It portrays how the country is turning extreme right wing and that is so sad.”

The makers of “Tandav”apologized for supposedly hurting religious sentiments and several contentious portions from at least two scenes in the web-series have been snipped. The college play scene where we see Ayyub as modern-day Shiva was removed. In its place, viewers now see Ayyub’s entry on stage as Mahadev amid cheers from the audience and the scene then abruptly shifts to police entering the campus to arrest a student.

But an unapologetic Alhat asks, “Why should the team of ‘Tandav” apologize or even change some scenes? Why bow down when you know that it may stir sentiments? If you want to bow down, then do not waste your time making such thought-provoking series.”

However, apology or not, the pressure continues to mount for the makers of ‘Tandav,” who were not given relief over criminal cases lodged against them in multiple states. The Supreme Court on Wednesday refused to grant the makers’ and actors protection from arrest, citing that “right to freedom of speech is not absolute.”

According to a report in Hindustan Times, when Mohd Zeeshan Ayyub’s lawyer argued that he was just an actor under contract and that the views expressed by his character could not be attributed to him, Justice M.R. Shah said, “You accepted the contract after reading the script. You cannot hurt religious sentiments.”