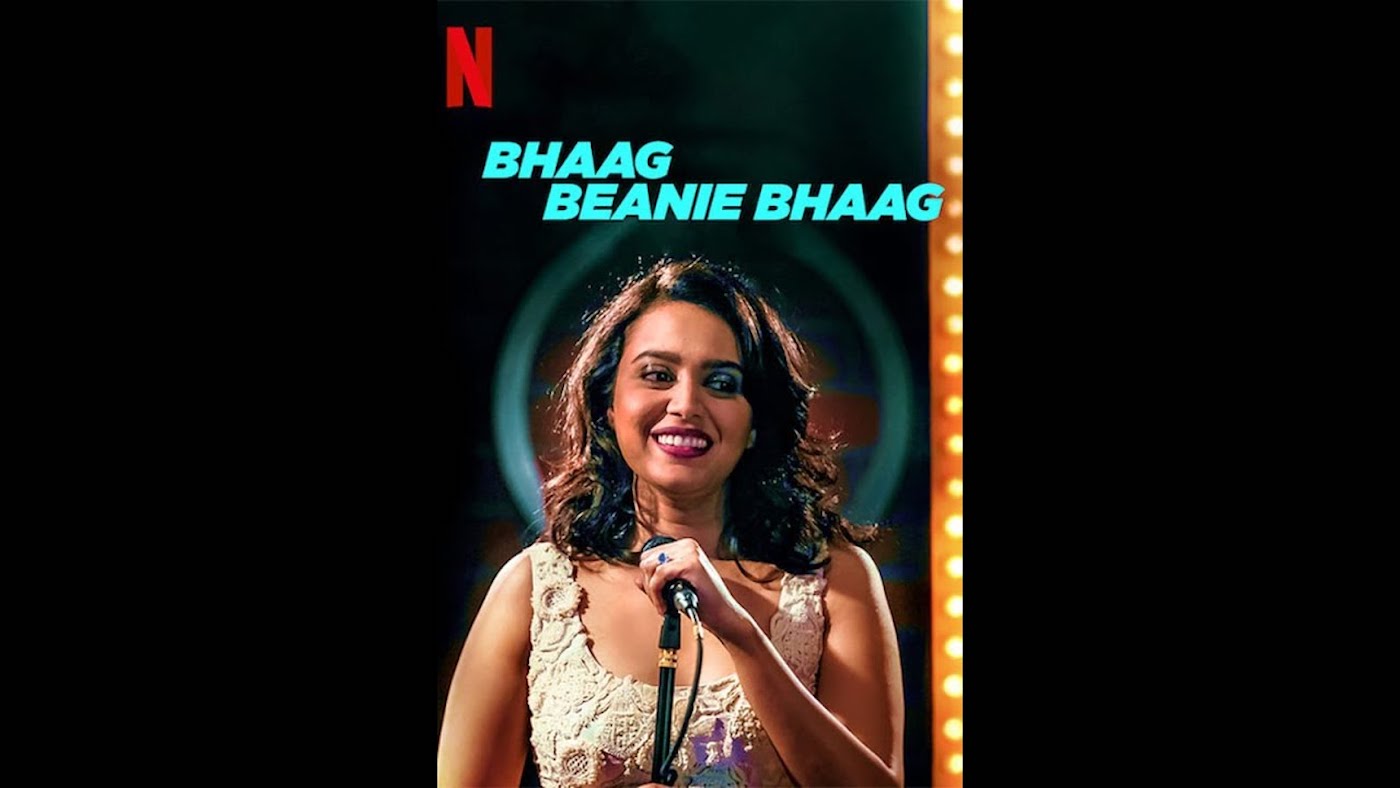 A young woman, baulks at the idea of wedded bliss and domesticity, ditches her betrothed on their roka night and finds her voice doing stand-up comedy. In a nutshell that’s what Netflix’s newest venture “Bhaag Beanie Bhaag,” starring the versatile Swara Bhasker, which aired Friday, December 4, is all about.

Sound familiar? It’s the somewhat-desi-version of the hugely popular show on Amazon Prime – “The Marvelous Mrs. Maisel.” Sure, the details may differ – the streets of New York are replaced by the gullies of Mumbai, the raunchy humor of Mrs. Maisel by the parental-permission-required brand of Bhasker’s humor, and it’s set in India, 2020 instead of New York in 1960 – but the parallels are obvious!

And for those who haven’t watched “The Marvelous Mrs Maisel,” now in its fourth season, the trials and tribulations of “not a comic comic” Beanie Bhatnagar, the newest kid on the stand-up comedy block, may well be a novel watch.

Beanie Bhatnagar (Swara Bhasker) has an idyllic life: an MBA degree, a dead-end but well-paying job, and a loving, boring fiancé who comes with a lifetime guarantee of stability and a four-bedroom apartment with the comforts of a dishwasher. Just like Midge Maisel, Beanie too chooses to leave this cushy life behind –– to embrace the lure of the stage and stand-up comedy in the exploding stand-up comedy scene in Mumbai.

The desi episodic series (Season 1 has 6 episodes) has an interesting bunch fronting it: Swara Bhasker as Beanie, Girish Kulkarni and Mona Ambegaonkar as her harried parents, who can’t understand why Beanie would give up the security of wedded bliss and a well-paying job (yes, she quits to-be-hubby and job on the same night) for the uncertain future of comedy, Dolly Singh, one of the screamingly funny ‘South Delhi aunties’ duo, as the ever-supportive social media influencer (apparently that’s a lucrative profession now!) BFF, Ravi Patel (Ravi Patel’s Pursuit of Happiness), real-life NRI-stand-up comic in a bumbling screen version of himself, and Arun (Varun Thakur) as the dumped fiancé.

But the show, written and created by comics (Ravi Patel is one of the creators), who are meant to have cracked the stand-up scene, come together only intermittently. For the rest, we are left looking for true comedy, the kind that comes from uncontrived, genuinely original scripts and situations.

Tropes abound. The runaway girl from her ‘roka’, togged in a ridiculous white tulle outfit with feathers, may remind you of a Julia Roberts in the Hollywood hit – “A Runaway Bride.” I wonder why the writers did not do something, at least, visually original. There’s also “Hot Bathroom Sex,” “Crashing On BFF’s Couch”, “Awkward Meet With Former Lover and New Girlfriend” — all reminiscent of scores of Hollywood rom-coms.

Also, too many characters are saddled with their own one-liners. Not everything needs to be a set-up, or a punchline. Or how will one differentiate between the occasionally, inadvertently funny stuff regular folk say and an actual comedy ‘set’? The actual sets, in fact, didn’t really land and left us wanting more.

Bhasker comes off better in her softer, romantic moments, because that’s a side of her we haven’t seen much of. Not a stand-up comedian herself, Bhasker fills the role of a comic very well; during the stand-up segments the lines she is given are delivered with the right rhythms and they actually generate laughs — though they might generate more if you relate to Indian life, like me.

But Beanie, as well as everyone else, needed to have been drawn sharper. There’s one particularly lame patch meant to promote shrinks and therapy, in which the show’s stalwart best performers — Girish Kulkarni and Mona Ambegaonkar—are left to flailing, fending for themselves. The latter, though, rises above her lines, throwing them out like a pro — “main toh  Govinda  se ek minute mein  shaadi  kar leti!”

In a flash back, we find out that Beanie always wanted to entertain, and eventually landed on stand-up comedy. As she entered her adulthood, she found herself at open mics and doing her “tight 5” at comedy clubs late at night. But, “like most middle-class kids,” she gets an MBA and a desk job to keep her parents happy. She also starts dating Arun, a nice but not very interesting guy whose family has money and that she loves baigan (eggplant) fritters. Beyond that we know nothing much about Beanie and Arun.

And what about BFF Kapi (Dolly Singh)? How does she manage to live in a flat that looks like it stepped out of the pages of a design magazine, wears the latest in couture, has a domestic assistant (bai) and has no known job or source of income. Media influencer does not count!

The one reason why this show worked was because, to be honest, we are desperate to see an Indian rom-com to not all be about marriage – arranged or otherwise. We get that it’s a huge part of Indian culture, but we already have “Mismatched,” and reality shows like “Indian Matchmaking” doing this issue due diligence.

We are left rooting for Beanie, wanting to see her succeed in what is still likely a very male field in India and in her slightly non-traditional dream. While we might want a little more depth coming from the show as it goes along, “Bhaag Beanie Bhaag” is off to a good start.  So, if you’re up for a breezy watch, “Bhaag Beanie Bhaag” is a binge-able show