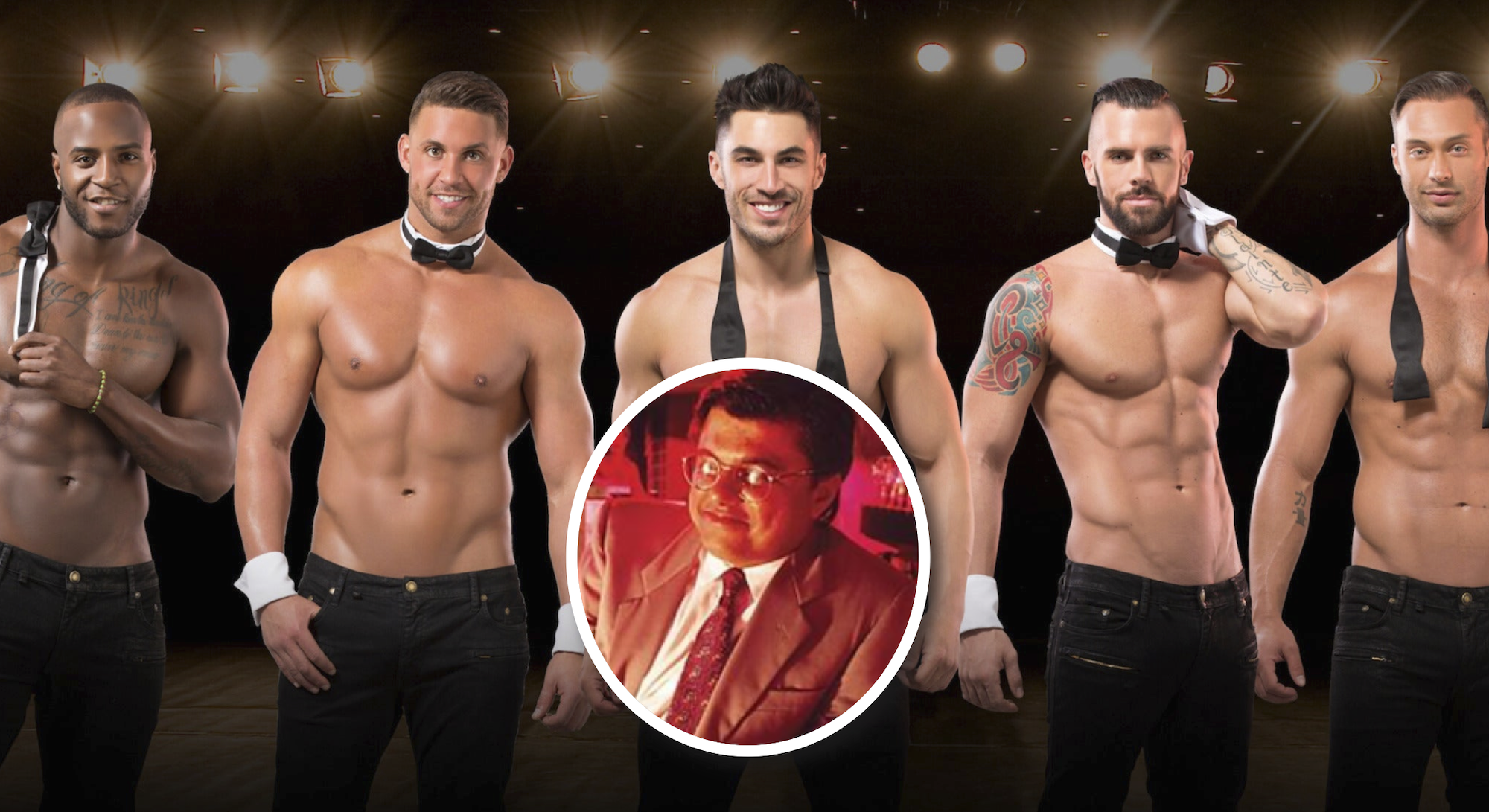 There are two projects — a feature film and a television series — in the offing depicting the life of the most colorful and controversial Indian American ever. Kumail Nanjiani and Dev Patel are set to play the role of Somen “Steve” Banerjee who committed suicide in 1994 in a jail cell after a life of incredible success and precipitous fall. Nanjiani will be heading Hulu’s limited series and Patel will play the lead in the film directed by Craig Gillespie of the “I, Tonya” fame.

Somen Banerjee is often described as “the most infamous Bengali immigrant to have landed on American shores.” Banerjee, who immigrated from India to the U.S., founded Chippendales, the male striptease performance clubs with muscled, oil-slicked male dancers, wearing collars, cuffs, black Spandex pants, and little else. He named them Chippendales, after the classic Chippendales-style furniture that adorned the club where the guys first performed.

The success of the Los Angeles club spawned a New York club and other permanent locations, including their flagship location inside the Rio All-Suite Hotel & Casino in Las Vegas. Touring troupes were established and soon the Chippendales were traveling the world, entertaining women across the globe.

Chippendale’s began when Banerjee bought a small, fading Los Angeles club called ‘Destiny II’ and converted it into what became one of North America’s biggest and most popular nightclubs and dance troupes. When it started, along with the male dancers, the club also had female mud wrestling.

Later, Banerjee’s club “Destiny II” would change its name and inherit the Chippendales moniker. The early shows quickly gave rise to what would become and remain a pop-cultural phenomenon. It didn’t take long before the Chippendales brand gained popularity for introducing the “all male revue” style of entertainment to their all-female audience. From their inception to now, the brand has grown to become the epitome of the Girls Night Out experience.

However, Banerjee’s classic immigrant dream turned into a nightmare. Banerjee was eventually embroiled in various murder plots and arson incidents and was later indicted for multiple murders. He then entered into a plea agreement that would have led to 26 years in prison, and loss of his share of the Chippendales. But, hours before he was due to be sentenced, Banerjee was found dead in his cell. He committed suicide by hanging.

Banerjee’s story is being retold in “Immigrant,” an eight-episode limited series at Hulu. Kumail Nanjiani has been roped in to play Banerjee. Hulu says the series will detail the insane, darkly comedic, crime-ridden story behind the unique male revue that became a cultural phenomenon. The series will be written by Robert Siegel. Executive producers include Nanjiani, Dylan Sellers, Emily V. Gordon, Rajiv Joseph, and Mehar Sethi, who will also write for the series which is produced by 20th Television.

Who is Somen “Steve ” Banerjee?

Banerjee was born in Bombay in 1947, the year of India’s independence. He was a fourth generation printer. In a detailed piece in diasporic.com, Anirvan Chatterjee writes that while Banerjee later went by his nickname Steve, “he retained his name Somen, even after immigration; perhaps the coincidence of his given name (in Bengali, pronounced as “show-men”) did not escape him.”

Banerjee left India sometime between the late 1960s and early 1970s. He spent some time in Canada, before he settled in Playa Del Rey, California, near Los Angeles, in the early 1970s. An entrepreneur from the beginning, he owned and operated a Mobil gas station in Playa Del Rey for some time. “He dabbled in other ventures, but was burned when he lost a large sum of money in a failed backgammon club,” Chaterjee writes in diasporic.com. After buying the failing Los Angeles rock and roll bar and eventually renaming it Chippendales, Banerjee’s business was flourishing.

By the late 1980s, the Chippendales were almost a household name. Over a million copies of their calendar were sold every year. “Touring profits exceeded $25,000 per week, and at its height, Banerjee controlled an $8 million a year business,” as per diasporic.com.

Beginning of the End

But along with success came jealousy and greed. In March 1979, Banerjee attempted to get someone to burn down Moody’s Disco, a competing nightclub in Santa Monica; minor damage was sustained to the premises. Again, in 1984, he attempted to have someone burn down the competing Red Onion restaurant and bar in Marina del Rey; no major damage was caused.

That’s when Banerjee started working with Nick DeNoia, an Emmy-winning director of children’s TV shows. DeNoia became the Chippendales choreographer, and has been credited  for the success of the Chippendales dancers. However, Banerjee and DeNoia had a fallout because of profit-sharing issues with touring.

In 1987, DeNoia sued Banerjee for violating their touring agreement. A few months later,  DeNoia, was shot in the face in New York City, by hired gun Ray Colon. There were reportedly rumors connecting Banerjee with the shooting at the time, but the case remained unsolved.

Undeterred, “Banerjee subsequently bought back the Chippendales’ touring rights from the DeNoia family, for $1.3 million,” as per  diasporic.com. In 1988, the original Chippendales club closed, after losing its liquor license and fire permit. The group turned into a solely touring revue, under Steve’s new control.

A few years later, Banerjee tried to have former Chippendales choreographer Mike Fullington killed.  Fullington was then working for the competing male dance group Adonis. This time Once again Colon was the hitman. Colon was also set to murder two former Chippendales dancers, who had also joined the rival Adonis group, then touring Britain. But this time, he outsourced the job to another hitman – -an FBI informant – who confessed to the American Embassy.

By 1990, the FBI had begun to build the evidence to build a case against Banerjee.

Banerjee was arrested Sept. 2 and held without bail on an original indictment that charged him with arranging the murder of a former business partner in New York City and attempted murder of three ex-employees who joined Adonis. .On Oct. 6, 1993, a federal grand jury indicted Banerjee, then 46, on seven counts, alleging murder, murder for hire, racketeering and arson, the Associated Press reported then.

One month later, the charges against Steve Banerjee were expanded to include the killing of DeNoia. The grand jury also charged him with racketeering and arson, as well as the 1990 planned murder of Jagjit Sehdeva, over a business dispute.

On July 29, 1994, Banerjee pled guilty to racketeering, attempting to burn down a competing nightclub, and arranging the murder of Nick DeNoia. He faced 26 years in jail, as part of a plea bargain that would drop his other murder for hire charges; he would also have to forfeit his interest in the Chippendales’ parent company. He was to be sentenced in three months, on Oct. 24. Sometime between 3 and 4 am on the night of October 23, 1994, just hours before he was to be sentenced, Banerjee took his own life; he hung himself using a torn bed sheet on a coat hook, in his tiny cell in Metropolitan Detention Center in downtown Los Angeles. He died at age 48. The police found a note left in his cell, written in Bengali, that they couldn’t decipher.

Apart from the Hulu series, there’s also a film planned on Banerjee, starring Dev Patel. It is to be directed by Craig Gillespie, who helmed the 2017 Oscar-winning film “I, Tonya.” Variety reported that though Patel has been cast as Banerjee for several years, the supporting role of his business partner, Nick Denoia, is still up for grabs. Ben Stiller was originally in talks to play the part, but is no longer involved as he is focusing on his own directorial career.