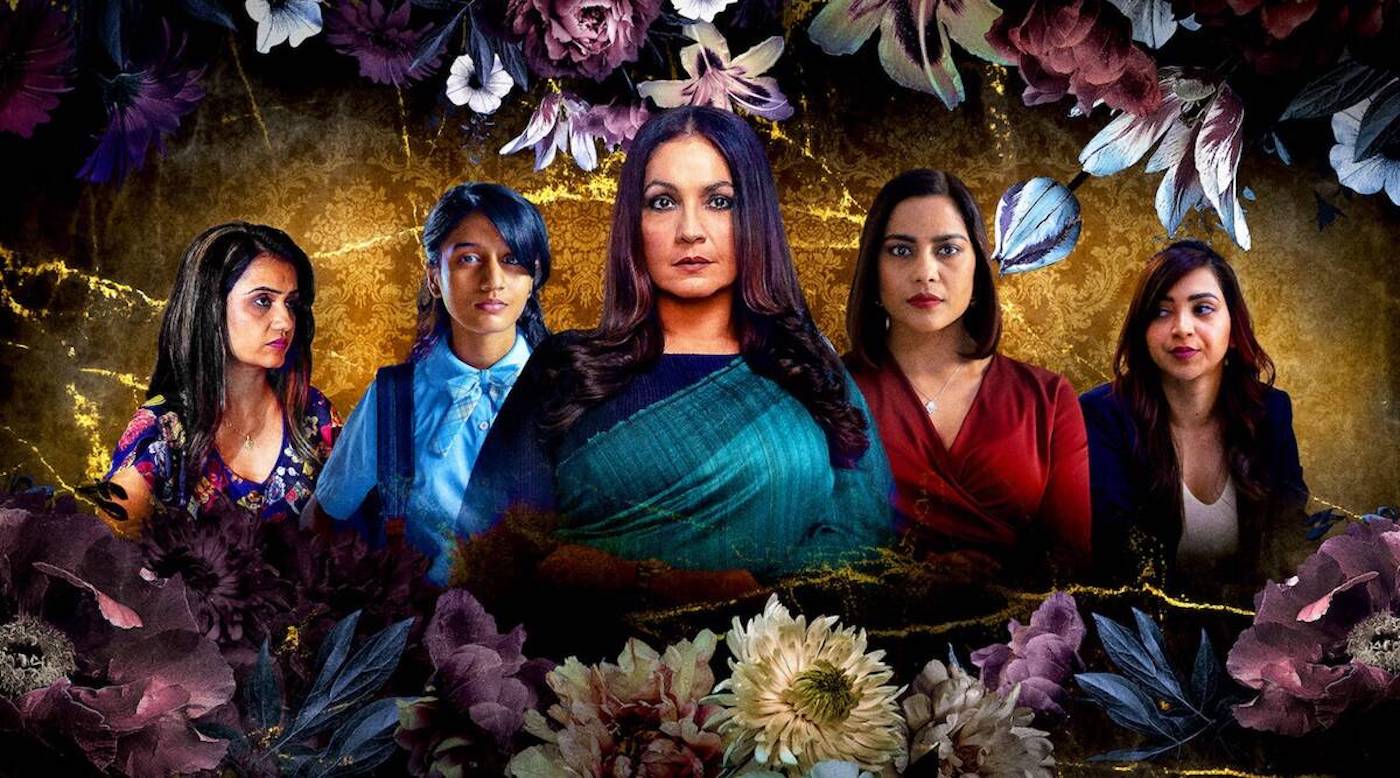 The struggle for women is real, people. The glass ceiling is very much intact, even though Vice President Kamala Harris managed to make quite a large dent in it. And whether they occupy that coveted corner office in a plush corporate setting, or much humbler digs on the wrong side of the tracks, “Bombay Begums,” a six-part series on Netflix original series encompasses that age-old truth as seen through the interconnected stories of Mumbai begums — if you are a woman, you have to fight for your rights, every step of the way.

Rani Irani (Pooja Bhatt), who landed in Mumbai many years ago from Kanpur without a penny is the CEO of a bank, zealously guarding her hard-earned turf. She, in turn, picks hotshot banker Fatima Warsi (Shahana Goswami), who works in the same bank, and is steadily climbing up the ladder, for a key position. Neither can afford a slip-up. The bank’s male-dominated board would love to see Rani come a cropper. And Fatima’s husband (Vivek Gomber) would rather have her barefoot and pregnant and chuck up her career.

Ayesha (Plabita Borthakur) is a small-town girl trying to find her footing in the big bad city. She is a new employee at the bank, ambitious and starry eyed, but naïve, with very little wisdom about how the world operates.

Through a twist of fate and a car accident, Lily/Lakshmi Gondhali (Amruta Subhash), a bar dancer turned sex worker, enters Rani’s life….a little contrived and far-fetched though this meeting may be, but necessary to move the story forward. Rani then introduces her to Ayesha, who is assigned the task of setting up a factory for her as a part of a social service scheme. Rani wants to turn the bank’s balance sheet around and win the hearts of stepchildren who, I personally felt, were less confused teenagers and more privileged brats.

Fatima, who gets a huge promotion soon after she discovers she is pregnant, wants to have a baby because that’s supposed to be an easy thing for women to do…right!

Ayesha who is struggling to come to terms with her sexual orientation, wants to succeed at her job so that she can escape the suffocating control of her parents.

Lily wants to give her son a better life, but the means she resorts to aren’t always above board. Offering a rather intrusive and wholly unnecessary voiceover describing the emotions these adult women are going through, is Shai (Aadhya Anand), Rani’s lonely teenage daughter with raging mommy issues. She is going through adolescent struggles of her own, and has mental conversations with her dead mother, musing on matters of the body, head and heart that seem way too mature for a kid her age.

These women come from different strata of society and age-groups, but are united by one single immutable, unalterable fact – gender – and how everything these characters do is circumscribed by centuries of ingrained patriarchy and misogyny.

These women, with their intertwined lives, rise above their wounds and scars to forge ahead in life. These are real women with real feelings and their share of flaws, fighting to hasten the death of gender disparity. None of them averse to a transgression or two.

There have been ambitious women in the movies and on TV shows before, so it isn’t exactly virgin territory that “Bombay Begums” treads. But where it scores is in its decision to create full-bodied female characters who refuse to be likeable, or to conform to society. And also in the way it shows us just how much women themselves are complicit in maintaining the status-quo, once they reach a certain position.

Take the case of the a predatory male colleague (Manish Choudhary) at the bank who is outed by a new entrant after a sexual assault, and instantly the older women close ranks on the shaken young girl asking her myriad questions –  has she any idea how her complaint will impact her fledgling career? How drunk was she when it happened? Wasn’t it consensual? Think of the man, and his happy family and how these accusations will ruin his life. This incident opens up old wounds of sexual harassment that a character had to suppress, and difficult truths come tumbling out, so timely in the current #MeToo era.

“Bombay Begums,” showcases women navigating a milieu that militates against their quest for independence, recognition, equality and dignity. Imaginatively scripted and propelled by adroit performances, the show mines multiple layers of conflict for understated and consistently engaging drama that judiciously steers clear of overkill. The punches it throws are measured and well-directed.

Not everything works. I wasn’t quite convinced about the way the bar dancer’s story is shoehorned into the narrative, but Amruta Subhash’s playing of Lily is so good that you want more of her. Some twists feel contrived and too convenient. And the coming of age of the privileged teenage girl is a bit too literally realized, but again there are so few cinematic attempts of pubescent teenagers becoming aware of their bodies, that I will take this too, thank you very much.

What joy to see women getting their due, speaking up and speaking out. Pooja Bhatt owns the part of Rani, the woman who’s got to where she wanted, her scars showing. She is in a relationship with a powerful man (Rahul Bose); her spouse (Danish Hussain) is in the know. What happens between partners in these so-called ‘open marriages’? And just look at that gorgeous wardrobe, the saris she wears, each better than the other. Shahana Goswami makes us empathize, effortlessly, with her Fatima, who is not in the happiest of places with her husband (Vivek Gomber), and who comes alive only when she is in the boardroom. Motherhood is not what will fulfill her; a place at the high table will.

Female ensembles and female driven narratives are director Alankrita Shrivastava’s strong suit. Whether it was “Lipstick Under my Burkha” or “Dolly, Kitty Aur Woh Chamakte Sitare,” women, their aspirations, their repressed or unfulfilled sexual desires and their fundamental desire to be treated with dignity, are recurring themes in her work.

Office politics and the uneasy throne that a woman in power sits on in a traditionally male dominated industry and society, sexual harassment in the workplace, the pressures on a woman to conform to conventional expectations while also breaking glass ceilings, and the sad reality that women can be patriarchal too, are all ideas that Shrivastava and her co-writers weave into the narrative. Shrivastava, who has been consistently pushing boundaries with her portrayal of women’s sexuality, does once again, pushing the envelope through these ‘begums’ of Bombay.

Unfortunately, each topic is only briefly touched upon and not explored in detail, leaving the viewer wanting just a little bit more. While the series makes some very valid points and has some truly impactful moments thanks to its ensemble of fabulous actors, it didn’t have an emotional orcathartic impact on me. Instead of letting issues like sexism or patriarchy slide in unsuspectingly like it happens in most of our lives, Shrivastava and her team get their characters to verbalize and pontificate far too much about their struggles as women. Even the titles of the episodes are directly lifted from stalwart feminist texts like “The Color Purple” and “A Room of One’s Own.” Rani, the CEO of a bank poses for a karvachauth ad and even celebrates the festival, the irony not lost on anyone. But the show gets Lily to comment about how it’s a problematic custom and then also throws in a voiceover to further dissect why women follow traditions for love etc.,  overkill in my opinion, and completely ruining the impact a moment like this could have had.

The series also showcases Lily who wants to live a respectable life, but she keeps repeating ‘I want to live with respect’ so many times, instead of just letting the visuals spell it out for us, that the message loses its potency. The only character I could perhaps empathize with, was Ayesha. Having lived on my own in a city, not Mumbai as a young working professional, her 20- something-year-old character, living in Mumbai and being ill-treated by landlords for being a single working woman, her struggles to find stability in the city of dreams, I found to be quite relatable.

It is wonderful to see so many talented women working together and being offered leading roles that allow them to explore multiple shades of black, white and grey. For that alone, this series and Shrivastava deserve kudos. This drama shows flawed, real, women who will make you stay with them, and root for them. What are the trade-offs on your journey to the top? And where are the hard stops? These are some of the questions, which the series places front and center, making it a meaningful and welcome addition to contemporary feminist fiction.

“Bombay Begums”, a compact little series of six episodes each about 50 minutes long, is streaming on Netflix.