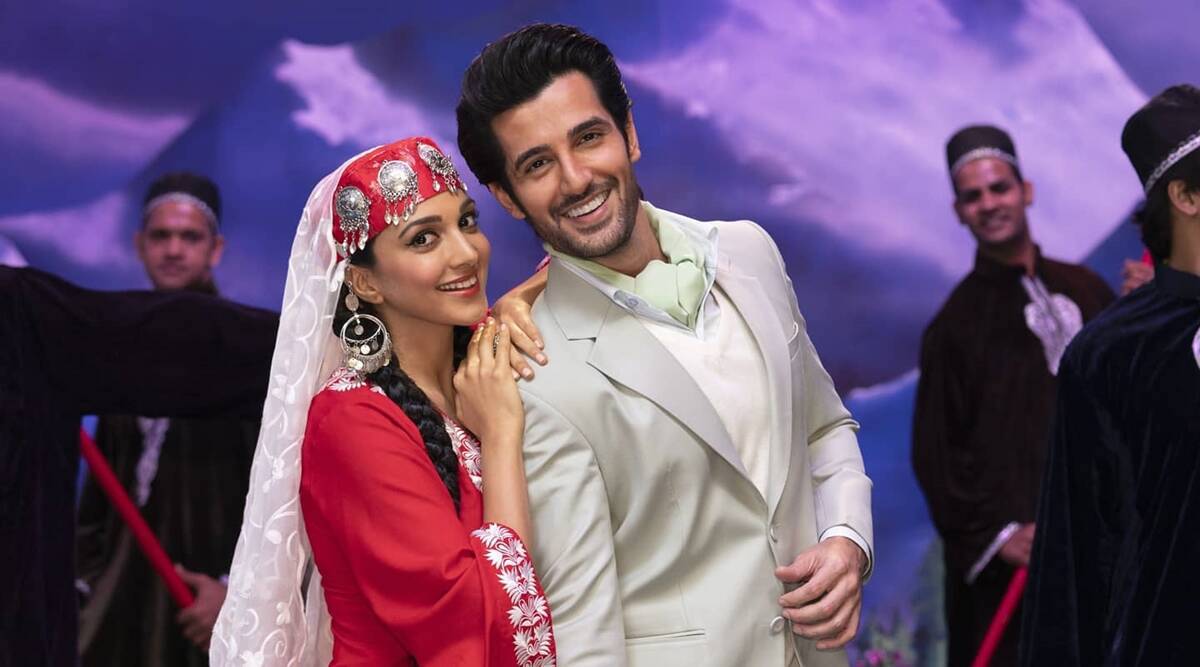 With still not wanting to brave going to movie theaters, flipping through streaming platforms on days off has become part of the course for me. So, when a friend recommended a movie I had not even heard off, I immediately had to check it out. And if I watch a movie, review toh banta hain…so here goes.

Bollywood is back in Ghaziabad. This time around, the camera isn’t trained on foul-mouthed, trigger-happy criminals but on libidinous men – and a sexy young lady – and raging hormones. But the outcome is no better.

Logic is often scarified at the altar of comedy and entertainment, but the problem with writer-director Abir Sengupta’s “Indoo ki Jawani” is that it’s highly preposterous and profoundly silly. From adolescent boys to retired uncles, everyone’s leching on the voluptuous Indira Gupta (Kiara Advani) and by her own admission, the only thing that’s trending on Ghaziabad’s social media is #IndooKiJawani.

She’s dating a tharki (sleazy) loser (Raghav Raj Kakkaer), who is desperate to make out with her, but Indoo won’t put out, unless he grows a pair and formally asks for her hand. Now that’s not what he wants…he wants the milk for free, not buy the whole cow. “Sabka break-up tak ho gaya, hamara make-up bhi nahi hua,” the boy laments. You mean “make out nahi hua, “Indoo corrects him.

She pretends to be clueless every time there is a boy in her vicinity acting friskier than he should. There are many because everybody in her middle- class neighborhood, from callow teenagers to past-their-prime men, has the hots for her. But the young lady chooses to bide her time because she wants her first kiss to be with someone who is truly special. So, tharki does what frustrated tharkis do, he ends up cheating on her with nukkad ki Alka (Lisha Bajaj).

Cut to the wedding of the very girl she caught between the sheets with her boyfriend. Indoo’s nerdy  kid brother Bunty’s (Harsh Sharma) feckless friend Kittu (Shivam Kakar) hits on her at the wedding. Indoo is lusted by not just young boys like Kittu but also the budhe (old) uncles: Prem  uncle (Rakesh Bedi), Ranjit uncle (Rajendra Sethi) and Pran uncle (Chittranjan Tripathi)

When she ignores Kittu, he spikes her soft drink with alcohol. Indoo gets tipsy, sheds her dupatta (and inhibitions), and dances with gay abandon to a remix of Mika Singh’s “Saawan mein lag gayi aag.” As predicted, the night doesn’t end well. And since fingers are always pointed at the girl, her reputation in her neighborhood gets tarnished, much to the chagrin of her middle-class mummyji (Alka Kaushal) and daddyji (Rajesh Jais).

Indoo turns to her trusted friend Sonal (Mallika Dua), who is an encyclopedia on ‘what boys want.’ She convinces Indoo that all men are skirt-chasing pervs and the only thing they want is to get into her pants. Sonal suggests a change of pace. “So get on ‘Dinder’ (Tinder…get it?) and swipe right for no-strings attached action, before it’s too late”, her sage advice.

Don’t ask for logic here, but Indoo takes this ill-advice and in her very first swipe, the dishy Samar (Aditya Seal) lands up at her house, when she’s home alone. Parents having conveniently left with brother in tow for college admissions.

Meanwhile, to make matters worse, word has got around (thanks to an over-the-top television news anchor frothing at the mouth and doing his best to whip up a frenzy where there should be none) that two Pakistani terrorists are on the loose in Ghaziabad. When Indoo finds out that Samar is from our not-so-friendly neighbor Pakistani, the question looms – did Indoo just inadvertently invite trouble home?

The first ten minutes of “Indoo Ki Jawani” are surprisingly promising. In those few early scenes, we get the feeling that this could be a comic spy thriller with unpredictable twists, but soon, the plot derails and never quite seems to get back on track. As creepy old men and weird teens make a beeline to grab Indoo’s attention (or whatever else they can), it becomes amply clear that casual sexism is going to be passed off as comedy, which is loud, unfunny and downright crass. And without an ounce of conviction in the telling.

Abir Sengupta’s screenplay is effective in parts. It was welcome to see that the writer did try to ensure that the film doesn’t come off as a run-off-the- mill product. However, the film dragging at a couple of places, does veer off course! Sengupta’s direction is neat and simple.  Also, the director focuses on how people in neighborhoods in small towns tend to be nosy and prejudiced under the garb of being cultured. This is treated in a humorous manner, but as many of us know is a reality and this element is well utilized in the script.

The finale is fun but could have been more thrilling. The idea of intercutting an action scene with the jagrata shots seemed trite and clichéd. But, using surrogate brand names like Fakebook, Dinder, Café Coffee Bay and Domato gave me some chuckles.

Mallika Dua, once again plays the stereotypical small-town girl, who’s the heroine’s BFF. She manages to bring in some laughs with her spoofy north accent, but once all the action winds down to Indoo’s home, there’s no redemption for this film.

While there’s barely any chemistry between the lead pair, which could be by design, their exchanges are repetitive and scenes laborious. Their accents are also all over the place. That said, both Kiara and Aditya are eye candy and there’s a forced shirtless scene thrown in too. Kiara looks gorgeous and strives hard to make sense of the randomness of her character. Her comic timing is weak, but Kiara’s screen presence is extremely appealing. Ditto for Aditya, who too is let down by weak writing. So even though Kiara tries to spice things up and Aditya does his bit to shore up the flimsy affair but to no avail.

The film’s music is hummable, although not of chartbuster variety, but is used well. “Hasina Pagal Deewani” is foot-tapping. “Dil Tera” is novel and beautifully pays homage to Bollywood. “Single Ladies” is relegated to the background, while “Heelein Toot Gayi” appears during the end credits. Neel Adhikar’s background score is in sync with the film’s overall mood.

The setting of a middle-class life in a small-town is deftly showcased, but sadly the character actors (including seniors like Bedi), who should breathe life into those sets, are a hamfest. For a comedy, “Indoo ki Jawani” lacks sorely on funny dialogues and humorous punches. Just like Indoo’s character that cannot decide whether she wants to be the badass and have all the fun or worry about log kya kahenge, the film’s narrative also seems confused.

From full-on Pakistan-bashing and Bharat mata ki jai ho, and from preaching about not judging a book by its cover to saying that all Indians are highly judgmental, and in the process touching upon both rising religious intolerance and the issue of women’s safety in India, “Indoo Ki Jawani” tries to go everywhere but reaches nowhere.