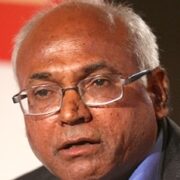 “Kuvempu took the knowledge that English had to offer while also delivering a blistering critique of the language as a vehicle of colonialism. If it were not for English, he would have been condemned (as a Shudra) to clean vessels in a Brahmin’s house.”

Obviously, the conference was organized mainly to oppose English medium education in government schools in Andhra Pradesh, which was decreed by Y.S. Jaganmohan Reddy when he became the Chief Minister of the state in 2019. Before that, the poor Dalit/Tribal/Shudra and Other Backward Classes (OBC) children could only study in Telugu medium schools.

The chief minister, however, mandated English medium education in all government schools from the academic year 2019-20. Such a game-changing step in the school education system in India was resisted by many Telugu leaders including Chandrababu Naidu and Venkaiah Naidu. Several court cases and ideological battles had to be fought on this issue by the chief minister before he succeeded. Now his education model is influencing the whole country. Already the Telangana government which was earlier opposed had to come around and introduced English medium in all state government schools.

The AP state government was the first to introduce English medium school education from class 1 to class 10 on par with the private English medium schools where the children of the rich study. The AP model stabilized English medium but has kept Telugu as a subject compulsory both in government and private schools. This is a new innovative experiment to strengthen English among the poor youth and also protect their native language.

Quite strangely, TANA leaders who live in the ‘English world’ are opposing teaching in the English language in government schools in India. How can people who went away from this region, and educate their children and grandchildren in world-class government-run English medium schools in America, protect Telugu in Andhra Pradesh?

Several Non-Resident Indians (NRIs) who support the Rashtriya Swayamsevak Sangh and Bharatiya Janata Party Government in Delhi, like the American Hindu Foundation, campaign for “One Nation One Language (Hindi)” while living in the U.S. and educating their children in English which gives them access to the best of science and technology and humanities. That’s hypocrisy.

Neither TANA members nor other NRIs send their children back to India to get Telugu or Hindi medium education. Most of them invest their dollars in private English medium schools and universities in India, into which the subsistence farmers, laborers and artisans cannot even dream of getting admission.

Not a single NRI has established a quality Telugu or Hindi or any other so-called vernacular language school or college in India and educated the poor free of cost or with minimum cost. India for them is the motherland for making more dollars in education-business, that too, only in English medium. It’s not social service.

These organizations and their leaders follow a classical Indian deceptive design that the Shudra/OBC/Dalit/Adivasis should not be educated in a language that prepares them for good jobs in India or gives access to the international job markets.

In India, access to lucrative careers and professions is controlled by upper castes educated in private English medium schools. Even some of the World Bank and IMF officials of Indian origin, who mostly live in America or Europe, think that English medium education should not be given to the productive masses of India. They speciously cite the example of African countries that are getting Anglicized by leaving behind their traditional tribal cultures.

Finance With a View: A Wealth of Wisdom in Raj Sharma’s Resourceful Book

But these same officials do not follow their ancestral Brahminic culture by studying in Sanskrit and following their traditions. They have instead studied in private English medium schools, put their children in either American or British schools and enjoy Western lifestyles.

Some of them argue that poor quality schools in the government sector with untrained teachers do not suit English medium education in India. That is not true because every graduate in India studies English from grade six, hence every school teacher is proficient in English. Besides, somewhere the shift has to take place towards educational equality in language and content. The AP Government has been giving basic training to teach in English and supplied mirror-image books to students and teachers (every textbook has one side of the page in English and the opposite side in Telugu). These textbooks make the job of teacher and student easy to read in both languages. Bilingualism is protected with this method and augurs well for teaching. Despite all these efforts, why are the NRIs opposed to English medium education in government schools and joining hands with anti-poor forces in India in the name of love for the mother tongue?

It is absurd that those children whose parents speak and work in English in the U.S. pretend that Telugu remains their mother tongue and they want to protect it from the danger of poor people in India learning English! Even though these NRIs want their relatives in India to get rich and have the best jobs that the private English education provides them, or enable them to emigrate to America or Europe, they are opposed to Dalits/tribals and OBCs studying in English. Could it be that they do not want the poor to compete with their upper-caste relatives?

That is the problem. For these NRIs, the American standards of equality are not for India. The class herd and caste mentality are deeply ingrained into their psyche. They don’t understand that language and culture are not the same. And that culture changes constantly. Many unused languages die and new languages emerge. What is important is human well-being, equality and modernization of societies.

The groups that went in search of a good life in foreign lands with the help of English and visit India once in a while to teach morals to those who are living there, is immoral. This emigre immorality does not serve the national interest of India.

Kancha Ilaiah Shepherd is an Indian author, activist and columnist. He is a retired professor of Political Science at Osmania University in Hyderabad. His well-known books include, “Why I am Not a Hindu,” “Post-Hindu India,” and “God As Political Philosopher.” He has written extensively about the relationship between Spiritual Democracy and Political Democracy. His book “Buffalo Nationalism” is a critique of cow worship and cow nationalism of the Hindutva forces. He believes that the dignity of labor must be integrative of spiritual philosophy to abolish caste and race inequalities. He has been campaigning for English medium education in government schools for the last three decades.