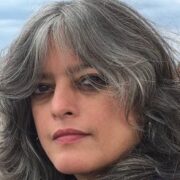 When some of the guilty face the law,
The law squints at their crime.
Some innocents serve to settle scores
And end up doing time.

Much depends on who you are,
And what you’re known to say—
Are you promoting Hindutva,
Or standing in its way?

Nupur and Rohit’s FIRs
Got them rightful bail;
Zubair must just have awful stars—
He gets to stay in jail.

‘Syndicate’, ‘destabilize’,
Do those words ring a bell?
The highest lawyer amplifies
The lowest IT Cell.

Hindu power evermore
Is what Hindutva’s selling.
Electoral bonds are such a snore,
Offence is so compelling!

If every Indian is the same
How can some be greater?
Call one a nationalist in name,
The other one a traitor.

Bake it into life and love,
Institutions and schools.
Keep some below and some above,
The double standard rules.

Here’s a winning formula
To make the Rashtra stronger:
Lengthen the long arm of the law,
And let its nose be longer.

Open Lady Justice’s eyes,
Change their very color—
Help her decide that discretion is
The better part of valor.

Break a mosque and win a temple;
Defer that habeas corpus.
Law can be so flexible
When law has found a purpose

(The purposeful can clean erase
Any kind of blot:
Preside over your own case
For a Rajya Sabha spot.)

The enemy is not out there,
Forget the China fuss!
Akhlaq, Teesta, Aakar, Zubair—
The enemy is us.

Start a witch-hunt so pernicious,
That those who have a voice
See the law grown so capricious
And face a Hobson’s choice:

Shut up, be safe, or else detail
What, when, who, why, and how
And maybe get marched off to jail,
Singing Bella Ciao.

The enemy is accountability,
And democratic practice.
When power rests on sentiment
The enemy is justice.

When things were going from bad to worse,
That was a precursor;
I’m trying to say, in awful verse—
We’ve gone from worse to worser.

(This poem was first published in The Wire)

Mitali Saran is an independent writer and columnist based in Delhi.