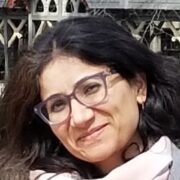 Remember the lawn signs for the general elections? Most of those signs should have gone by now (protocol is for the signs to be removed by the people who put them in the first place by the second Friday following the election.)

Lawn-signs, unlike the actual ballot, typically highlight the last names only. The idea of a lawn-sign after all, is to catch the seconds long attention of a motorist zooming by. And thus Biden-Harris became the combination that decorated my yard, and similar yards across America.

That the ‘Harris’ on that sign is a woman of color, becomes an inconsequential point. Rightly so. Kamala Harris, like Joe Biden, has vowed to be the leader for the entire country, and for all Americans, across race and party lines. Again, absolutely right.

Yet, nothing can take away from the pride that people of color want to experience, and express, in knowing that Kamala is the first woman of color to be the 2nd in command of the U.S. Kamala Devi Harris looks non-white and has a middle name that is uniquely non-white. Thank God for middle names, that allow for wiggle room for portions of identities that could otherwise be completely consumed by the ‘dominant gene.’

My current reflection though is on the last name — on its beauty, symbolism and power.

Unlike first names, last names are not typically a matter of choice. You almost inherit the last name, like a gene, except if you are a woman. Like in all things, the single constant expectation from a woman is adaptability, and thus it is that women are expected to change (no not mutate, simply change) their last names to those of their husbands.

Last names, or surnames, have their tales of origin. From starting out as simple differentiators for people, as populations in communities grew, to where we are today. For people of the Indian subcontinent, last names become even more fascinating constructs. From being taken after the trade one practiced or the village one came from, to creating castes out of them, last names often carry within them the strong currents of the fate one might be meted out. (Think caste-based politics.)

Most significantly, in modern times how surnames have become ‘Sire’ names, the last names of the fathers. They are the ‘family names,’ and the family takes after the father? My most non-kosher sounding interpretation of this tradition is that while the mother of the child is all too apparent to the world by the sheer biology of child-birth, the father of the child is technically always a mystery, known only to the woman. Thus, it becomes imperative for the father to ‘brand’ the child as his, by attaching his last name to the child.

And so, it is that little Barack even when being completely raised by a single white mom, gets registered into a largely white, affluent prep school in Hawaii, as Barack Obama, where he continues to suffer the ridicule of his classmates because of both his color and his names. (It is a subject of another story, that Donald Trump would conveniently mispronounce Obama’s last name for an international terrorist’s first name!)

And so, it is ‘that little brown girl who was bussed’ to an integrated elementary school in California, went on to have a tongue-twisting first name, and an easier on the tongue last name of an (again) largely absent father Donald Harris.

What torments me is that the names of these brave, fearless, proud mothers — Stanley A. Dunham (Obama’s mother) and Shyamala Gopalan Harris (Kamala’s mother) who raised equally ferocious and yet empathetic leaders, will forever be after thoughts.

Yet, one can argue that the odes to these matriarchs cannot of course be reduced to their identities as mothers of these remarkable children, nor as wives of people whose last names their children took. These are women whose stories we — their daughters, and hopefully sons too, will neither forget, nor take lightly ever.

And thus it was, when recently in a small gathering, someone commented that Harris is Kamala’s married name, I declared, in a soft, well-enunciated and satisfyingly brewed sentence, “No, it is her ‘maiden’ name.”

Last names are beautiful. They complete us in ways we probably cannot ever fully grasp. And yet, they are not completely innocuous. They radiate energies, they attract tribalism, and they perpetuate an interesting facet of sexism. One of the biggest, if not the biggest living tradition of patriarchy, in my humble read of the societies we inhabit, is the last name. And now I know why — because lawn signs for Presidential elections don’t have enough space for full names!

Dr. Nidhi Thakur grew up in Dehradun, India, and moved to the U.S. for graduate studies. She now teaches Economics (of gender, health and sustainability), and writes short fiction and poetry in Hindustani (a blend of Urdu-Hindi) and in English, as a commentary on the socio-economic currents of the time. She uses the moniker ‘HeartVersesMind’ to curate her publications on youtube.com/kunuishere2009, and on other social media platforms. Previously, she has performed and published fiction/non-fiction pieces in Asian American Writers’ Workshop Pop-up and In Full Color — an anthology of monologues. She currently lives in N.J. giving the final edits to her debut manuscript — a collection of short stories on immigrant sensibilities, with a twist!

Among the Palmettos: My Trip to Charleston was an Excursion Into the World of ‘The Great Santini’