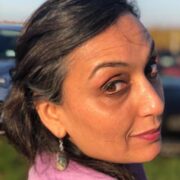 My nine-year-old student exclaims, “I used to think politics and news is boring but now I am so excited! I stayed up till 10:30 pm last night tracking the votes!”

In my nightmare, the giant Pac-Man monster-like virus is not bald but covered with oozing, writhing tentacles, each reaching out to trap and grab everything and everyone beloved to me for maximum impact, maximum chaos.

I wake up dry mouthed and heart thumping. Once I have reassured myself that these are not symptoms of the Covid-19 disease, I gulp some water and try to go to sleep again. It’s not easy. And it hasn’t been for the last several months, or the past year.

The year 2020 has been a memorable one — one that will be talked about in the same way we talk about the time the World Towers went down in NYC or when man first landed on the moon. Where were you when…?

Events will be discussed in pre-Covid and post-Covid terms and the 2020 U.S. election.

As a mother and as an elementary school teacher my job is to worry and make plans. Plan A, Plan B and Plan C.

As the months and weeks have inched closer and closer to D-Day, emails, social media messages, phone calls, absolutely everything has centered on this very topic.

Will we get the change that we crave? Or will it be 4 more years of the same?

Emotions have been running high as each person weighs in on issues, closest to their heart and the media frenzy for the campaigns has increased. Everyone has an opinion these days that only seem to get stronger by the minute. Yet, depending on the company you keep, what one feels comfortable to say and what one truly votes may be two very different things.

But the truly terrifying thing is, the incumbent has made one fact crystal clear. If the Biden-Harris team were to turn the tide and ride in on a blue swell, he will not go easily, will not concede gracefully.

As I leave my school and walk towards the subway to make my way home, I notice business after business are boarding up their windows, silently signaling what we are all fearing may happen. News media has been reporting extensively, the possibility of rioting, some going so far as to predict a civil war. As the November 3rd election date approaches, the tensions have been ratcheting up.

It’s the first time in our nation’s history that the validity of election results are in danger even before the count is in. The President has already declared that he will not accept the results if they are contrary to his own personal interest.

Friends are starting prayer chains asking for a favorable outcome and peace.

My grade 4 and grade 5 students are following the elections closely. We have studied the election process, the previous election, the electoral college, and the popular vote. These young impressionable kids are watching the news coverage at home with their families, parent and grandparents. They are listening to the President and taking note. They know about the Black Lives Matter movement and they know about the Proud Boys. All of my students are from blended families. They worry about what all of these statements meant. I worry too.

We have talked about making sure we push everyone we know to vote, make our voice heard, mail those ballots in, make it count. Tomorrow, my morning message will remind them that we spoke up and our nation will make its choice. Now it is time to wait and watch, accept the outcome, respect the democratic process, protect our hard-won suffrage, and unite our country.

These past four years have made it abundantly clear to me that I don’t agree with this current administration’s politics. President Trump started his first term with a ban on traveling from seven Muslim countries, sparking fears in my community of an anti- Muslim bias. He next went on to pretty much deal a death blow to the climate policies set by President Barack Obama, going against all conventional scientific research. Further, President Trump began the process of formally withdrawing from the Paris climate accord.

He also threw out the peace deal struck with Iran by the Obama administration. This made many in the international community question if any agreement can be relied upon. Are they valid only for as long as the administration doing the deal is in power? What does this mean in terms of consistency and long-term commitment?

President Trump minimized, and continues to minimize, the dangers of COVID -19. Even after testing positive himself, along with his wife and extended family members, he refuses to mandate the wearing of a facial mask in public spaces.

President Trump created a massive wave of panic amongst immigrants and DACA children, separating families, promising to build a huge border wall to keep them out. Going so far as to outrageously claim that Mexico would fund this border project, after he referred to their entire population of immigrants as “bad” and “rapists.”

Most importantly, President Donald J. Trump has refused to denounce White Supremacy and White Supremacists such as those that showed up in the  Charlottesville Rally. When asked to do so in the final presidential debate, he, instead, referenced the Proud Boys (a far-right, neo-fascist, and male-only organization that promotes and engages in political violence) and told them to “stand back and stand by,” implying a wait to march (like a military order) on his command.

Trump has continued to create ever-widening divisions amongst the community, especially against Black Americans. Racism has reared its ugly head across the nation and ordinary people now feel emboldened enough to actually threaten minority members with false accusations in minor disputes. And this litany does not even include his past history such as his blatant disrespect to women or his refusal to show his medical history or his tax records.

Needless to say, I voted Blue and am sitting at the edge of my seat while watching the election coverage and exit polls. Tonight, at least some of it will be laid to rest.
I fell asleep at midnight, still waiting to hear of a clear winner and then when I woke up, the race was still undecided.

I decided to jump on the Peloton to get some of this election anxiety out. I choose a new instructor and she leads us through a heart pumping ride to the songs of the musical Hamilton by Lin Manuel Miranda.

Come on America, “Don’t throw away your shot!”

Heading into work, I notice that literally everyone is glued to their phone looking up some sort of news. My students are hyped up, “Biden is leading! It’s gonna happen!”
We spend the whole day doing some sort of election related activity. We end the day by coloring in our electoral map, adding up the votes as they flash on the screen. We watch the action unfold in real time on the smart board. My nine-year-old student exclaims, “I used to think politics and news is boring but now I am so excited! I stayed up till 10:30 pm last night tracking the votes!”

At dismissal, the count is 248 to 214 and we are giving each other air high fives!

I am tremulously hopeful, checking the phone for updates every 30 minutes. Keeping my fingers crossed that I can go in to work tomorrow wearing my red, white, and blue outfit along with a big white shiny smile.

Unfortunately, as the day unfolds, Trump starts filing lawsuits claiming lack of transparency in the vote count. The margin is tightening, it’s just a few thousand votes apart in some of the battleground states.

It should have been a landslide victory—a no brainer after the last four years of acrimony and backbiting, instead we have to deal with the reality… that almost half of this country think his behavior was worthy of deserving another term.

70 million people voted for Trump, in the midst of a willful mishandling of a global pandemic. They should be ashamed, instead, they want to validate his behavior by elevating him yet again.

Also alarming is the fact that the Democrats failed to take the Senate again. Even if Biden wins, nothing will get done without the consent of Mitch McConnell’s Senate republicans. Plus, the Republicans now have a Supreme Court with a conservative majority for years to come.

The past two days have passed in a blur of flipping from TV channel to TV channel, hearing the same old, same old, constantly refreshing my browser and not witnessing any change. Family members cheering for Biden or yelling at Trump to concede already.

Saturday November 7, 2020 at 11:45 am the American people have officially spoken.

And I can breathe…Decency has won. With a small margin but Joe Biden is in!!
Now, the real battle begins, and we are ready! It’s good to be blue. God bless America.

Farah Khan Siddiqui is a U.S. citizen of Indian origin. She is a Grade 4 and Grade 5 teacher at International Academy of New York in NYC. In her free time, Farah volunteers with a community service organization, enjoys interacting with her book clubs, exploring the city, experimenting in the kitchen and trying out new hobbies.