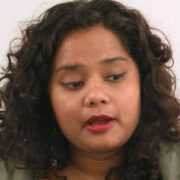 Can scholarship be an act of love?

This is the question I and many others are sitting with as we grapple with the tremendous legacy of American scholar Dr. Gail Omvedt, who passed away on August 25.

Gail is one of the reasons I became a Dalit American feminist scholar. I will never forget learning about Shri Guru Ravidas’s utopian imagination of a city without caste in her book “Seeking Begumpura.” Here I found a poem “depicting a city without sorrow, with no taxes or toil, no exploitation, no hierarchy, and freedom for all to walk anywhere.” It was a startlingly clear Dalit Futurism and its vision shook me to my core.

This was the power of Gail’s scholarship: she offered a bridge to the radical possibility of freedom for people from caste-oppressed communities.

Caste is a systematic structure of oppression with roots in South Asia that has now been transplanted to the United States. This system denies the rights and livelihoods of over 260 million people in India alone. This exclusionary social hierarchy ranks people into hierarchical groups based on illegitimate notions of spiritual purity. In this unjust system, Dalit and Bahujan people are made the most vulnerable, and the social order determines who and where they worship, choices and advancement in education and career, even personal relationships—in essence, their entire lives.

Anti-caste organizers have been working to end caste oppression around the world for decades in a movement that is millennia old. We endeavor to heal ourselves and our families through international solidarity with all oppressed people, as we work to dismantle caste apartheid collectively.

Gail’s contributions are one of the reasons we have a strong anti-caste civil rights movement in the United States and across the global South Asian diaspora. The key to her impact was the medium of English. Previously, much of the best anti-caste thought only existed in regional languages since many anti-caste scholars often wrote in their own local language. Since so many caste-oppressed people speak, write, and learn in different languages, this kept caste-oppressed communities not only from the world but from each other.

Gail’s incisive scholarship provided urgent interpretation and helped to contextualize and lift these ideas into the global canon of people’s resistance. She was a visionary leader among a generation of anti-caste scholars such as G. Aloysius, Kancha Ilaiah, Braj Ranjan Mani, Dr. Sukhdeo Thorat, and many others, who helped make legible to the world the powerful caste abolitionist history and movements of South Asia.

Gail’s work strengthened Dalit-Bahujan solidarity, enabling communities to read, debate, and be inspired by leaders whom we could not access in their original language. Her scholarship helped English-language and global audiences understand the incredible lineages and powerful leaders of anti-caste thought through over 25 books, including “Cultural Revolt in a Colonial Society: The Non-Brahman Movement in Western India,” “Buddhism in India: Challenging Brahmanism and Caste,” and “Jotirao Phule & the Ideology of Social Revolution in India.”

Her work exposed me to many anti-caste leaders when my own South Asian studies department told me there was no significant Dalit movement to learn from. I found my own lineage and history in so many of Gail’s books and would cry as I finally heard the voices of my people through her clear and concise scholarship.

In Gail’s life and work, scholarship and revolutionary politics intersected. Gail co-founded the Shramik Mukti Dal (the labor toilers liberation party) with the love of her life, fellow activist and husband, Bharat Patankar. Together, they worked on issues of caste oppression, workers, and farmers rights. This movement was defining in Maharashtrian politics, and through this work the line of scholar, advocate, and revolutionary became complete.

Love was the foundation of her work, which can be felt throughout her writings and through her family. The deep foundational love between her and her husband was a testament to how revolutionary love grounds movements and families, and shows that love is the ultimate antidote to Brahminism.

Gail’s love also delivered us her fearless daughter Prachi Patankar, a caste-oppressed American leader who has woven caste abolition with police abolition and in doing so inspired a new generation of activists in the United States. I see Gail’s legacy unfolding in Prachi’s own work and now in her granddaughter and the next generation.

That is why we grieve when we lose someone as powerful as Dr. Gail Omvedt. Her intellect and practical, but principled praxis has intergenerational impacts. As she transitions from elder to ancestor, we will build on the world of resistance her words broke open for Dalits like me. In her memory, we will continue shaping strong, growing movements for caste equity here in the U.S. and across the global South Asian diaspora— anywhere caste-oppressed people require freedom from harm and the hope of a vibrant future.

Though Gail has materially left us, she lives on in the millions of Bahujan people inspired by her powerful life and example. Jai Bhim and Jai Savitri, Gail. We salute you and your incredible legacy with love and immeasurable respect.

Thenmozhi Soundararajan, a Dalit rights artist, technologist, and theorist and is Executive Director of Equality Labs, a Dalit Civil Rights organization that  uses community research, cultural and political organizing, popular education and digital security to build power to end caste apartheid, white supremacy, gender based violence, and religious intolerance. You can find her on twitter, instagram, and facebook at @dalitdiva and Equality Labs @equalitylabs.