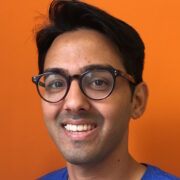 Remember AOL instant messenger? It was a playground for teenagers. Social media before smartphones existed. An escape valve for our overcooked brains. Everyone created screen names, logged in, chatted with friends, and lived behind statuses like ‘available’, ‘away’, or ‘brb’. In middle school, I’d come home, open up the desktop application, and log in to my account: pimppandey81. Yes you read that right. An amalgam of three things that mattered to me — pimp for the 50 Cent song of the same name; Pandey for my last name; 81 for my favorite football player, Terrell Owens — it became my avatar in the digital world. Until one day in the fall of 8th grade.

The phone rang at my house. My mom picked up and spoke in abbreviated phrases. Yes. Hmm… Is that so? The phone clanged against its white wireless charger when she hung up. Minutes later, I was sitting at the dining table. Sandy from the school had called, curious why an 8th grader had listed pimppandey81@yahoo.com as his email address. My mom lit into me. My dad provided an etymology of the word pimp. “It is not a profession you should idolize,” he said. He referenced his early teaching days in Pittsburgh, when his walk home would be past pimps in the park.

I had no choice but to pick a new email address: apandey112@yahoo.com. But not because I was born on January 12th or lived on 112th street. Rather, I picked it because of the R&B group 112, stars of the song “Only You (Remix)” featuring the rappers Notorious B.I.G. and Mase. It was my favorite song at the time.

“Few Americans know who and what they really are,” wrote the novelist Ralph Ellison. “That is why,” he continued, “…few of the children of [immigrant] groups — have been able to resist the movies, television, baseball, jazz… or any of a thousand other expressions and carriers of our pluralistic and easily available popular culture.”

He penned those words in 1970, a decade before South Asians were first entered into the record as “Asian Indians” on the United States census in 1980. We had a total population of 360,000 at the time, but by 2010, this number had grown eightfold, to 2.8 million. Some reports claim the number is upwards of 5 million today.

In a relatively short time frame, children of South Asian immigrants — the so-called second generation — have come of age with distant connections to their ancestral homes and fierce attachments to pop culture icons. Ask any one of us who we love outside of our families and listen as we rattle off names like Steph Curry, LeBron James, Beyonce. The carriers of culture have changed — who really cares about baseball anymore — but Ellison’s words ring as true now as they did 50 years ago. Popular culture is powerful; it shapes how young people communicate, understand themselves, and relate to others.

One of its most dominant expressions in the last half-century is hip-hop. Born at a house party at 1520 Sedgwick Avenue in the Bronx in 1973, hip-hop has ballooned into a multibillion dollar enterprise that commands our attention whether we like it or not. “We are hip-hop,” rapped the artist formerly known as Mos Def on the opening track of his 1999 album “Black on Both Sides;” it is “going where we are going,” he added. Looking around today at music, commercials, clothing, language, identity, politics, we get a sense of what he meant. Anywhere you look, you see hip-hop’s influence.

That’s why I created a podcast called South Asians Love Rap. I wanted to explore the music that matters, but from a different vantage point: our stories. What moves us? How does hip-hop shape our life experience and even our career paths? I have spoken to people in their 40s and in their teens; folks born in America, India, Pakistan, and Bangladesh; folks who live and breathe hip-hop and folks who enjoy it as a pastime. What I’ve learned is that our stories matter.

Hip-hop is often seen as a Black, male-dominated art form. On its face, this may seem true, but what it misses, ironically, is that inclusivity is baked into hip-hop’s DNA. Anyone can grab a mic, tear down a dance floor, tag up a wall, mix records, opine about their favorite MC, or greet a friend with “Yoooo!” If you’re wack, you’ll be made aware of that. But if you show respect and put in the work, you can earn a seat at the table.

Look at Joseph Patel, my first guest on the podcast. A film he produced, “Summer of Soul,” won the Grand Jury Prize at the Sundance Film Festival a few weeks ago. He worked on the film with first-time director and drummer for The Roots, Ahmir “Questlove” Thompson. In our hour-long conversation, Patel shared the genesis of their relationship, a day in 1996 when he was assigned his first cover story as a young journalist. It happened to be the first cover story for The Roots too, which set the stage for a lifetime friendship between Patel and Thompson.

Look at Sowmya Krishnamurthy, my third guest, whose words grace the pages of major music magazines like XXL and Rolling Stone. Look at Shomi Patwary, my fourth guest, whose music videos for megastars like The Weeknd, Metro Boomin, and Pusha T have amassed millions of views on YouTube. Look at Zainab Hasnain, my sixth guest, whose work on hip-hop focused marketing campaigns at Spotify have fostered more loyal, rabid fan bases.

Even folks outside the hip-hop industry, guests like my brother or Anil Jagtiani, have shed light on the outsized impact hip-hop can have on us. It helps with motivation to succeed, coping with loss, and everything in between. The same can be said for the under 20 crowd, guests like Josh and Gautham, or Shivam, who approach rap with an openness and curiosity that make them wise beyond their years.

Akash Pandey is a 31- year-old former educator who now works for NoRedInk, an ed-tech company that helps students become better writers. He hosts the podcast South Asians Love Rap and writes online from time to time.