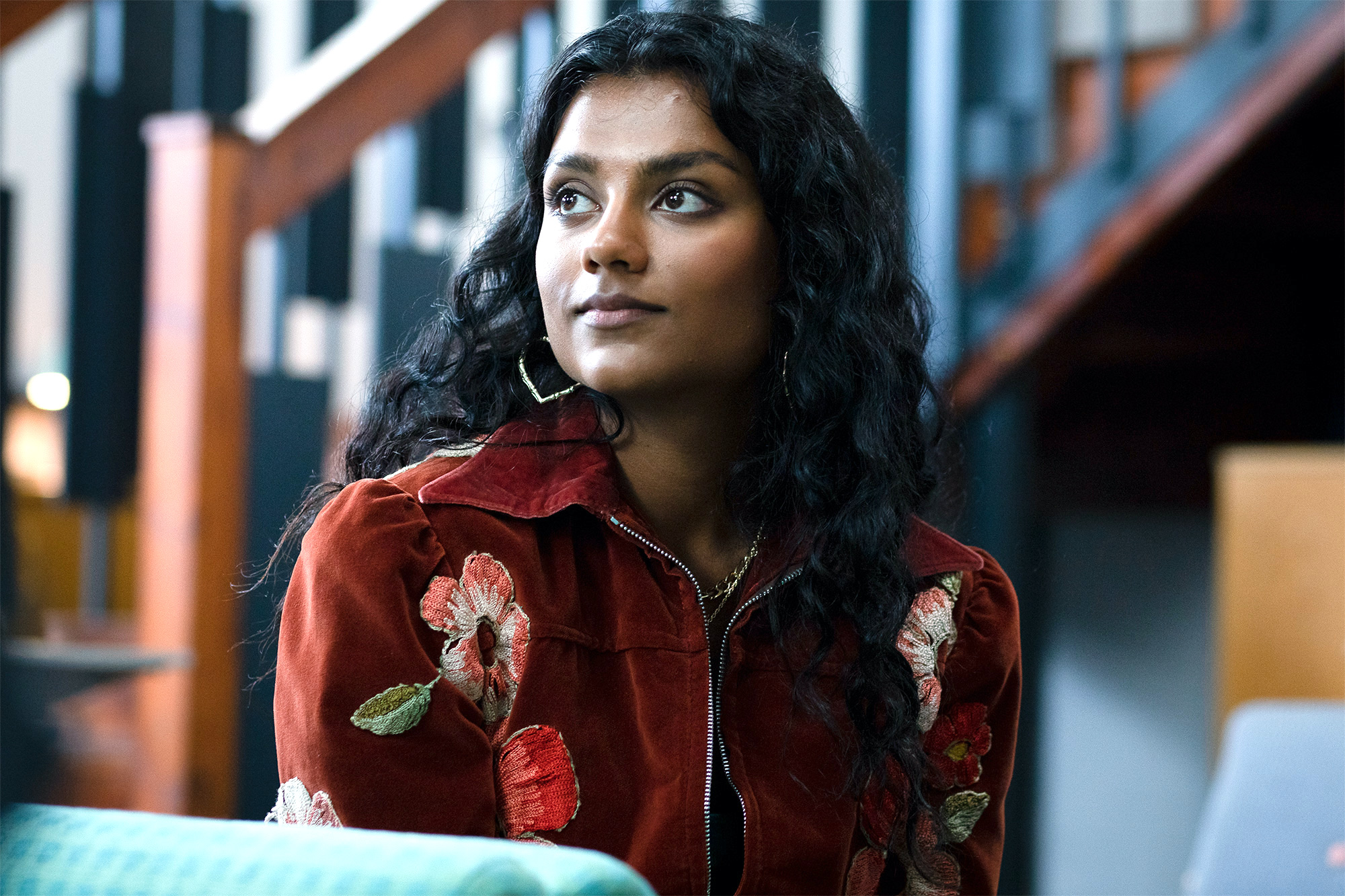 For all the “Bridgerton” fans out there, here’s the latest from the hottest British period show since “Downtown Abbey.” Simone Ashley of Netflix’s “Sex Education” is heading to “Bridgerton”and will no doubt be giving Lady Whistledown much to write about.

Netflix has confirmed Ashley has been cast in the second season of the wildly successful adaptation of Julia Quinn’s romance novels and will play Kate Sharma, Anthony Bridgerton’s new love interest.

Ashley’s character in the book is Kate Sheffield, not Sharma – changed to reflect Ashley’s South-Asian heritage. According to Deadline, Kate and her family “were conceived by the series’ producing team as being of Indian descent in a continuation of the reimagined, multiracial world of 1880s London’s high society.”

According to Netflix, Season 2 will follow the second novel in the “Bridgerton” series, “The Viscount Who Loved Me,” which revolves around Anthony (our elusive bachelor) in his search for the perfect match.

According to the official character description, Kate is “newly arrived in London” and is a “smart, headstrong young woman who suffers no fools – Anthony Bridgerton very much included.”

A spanner is thrown into the works when it’s revealed that Anthony is ready to marry, but that his future wife’s older sister, Kate, is determined to stop the wedding from going ahead. So, you can see how pivotal the role will be in the upcoming second season.

Besides having an incredible cast, beautiful costumes and an addictive “Gossip Girl” meets “Downton Abbey-esque” plot, the show — which is set during the Regency era in London — gained a lot of fans for its diverse characters and cast and has been widely praised for making diverse casting choices including Regé-Jean Page as the Duke of Hastings, Golda Rosheuvel as Queen Charlotte and Adjoa Andoh as Lady Danbury.

The British star, who is also known for her roles in “Broadchurch”(2013)and “Pokémon: Detective Pikachu” (2019),is however, the first actress with Indian heritage to score a lead role on the hit series, in another win for representation.

In a 2019 interview with Veylex.com,Simone opened up about being a woman of color in the industry:

“Colorism is an ongoing issue. As is being type cast, being looked over because of the color of your skin, losing roles to girls that are more ‘relatable’ to target audiences and markets. But if I surrender to all of that, where would I be going? Nowhere! F*** that. So, I try not to even think twice about any challenges that might come along due to my heritage. I say, ‘Yes I can’ and see what happens. And usually that mentality breeds positive, bright, and beaming opportunity. It won’t be a ‘challenge’ for very long, the world is changing. Indian girls are so beautiful, and I am so happy to see more and more projects being made that involve all of us!”

In response to the casting of Ashley, “Bridgerton” fans were elated. But it was on a whole other level for South Asians, who took this moment as a huge win for representation and to feel “seen” in the industry.

One Twitter user wrote: “I’m a brown girl and practically losing my sanity right now because you guys are amazing.”

Reshme Subramaniam tweeted, “The fact that a desi girl is gonna be representing all us Anthony Bridgerton fans and gets to make out with that gorgeous specimen of a man just makes me so emotionally joyful, THE EUPHORIA.”

Another netizen tweeted, “Thank you for making all of us brown girls happy today #bridgerton.”

Another fan Nirat tweeted, “Thank you for casting so diversely it’s so lovely to see cuz for so long period romance dramas never let POC be seen in them, even if it’s a reimagined world etc., it’s still so lovely and important.”

While some were also confused about the change in Kate’s last name, other fans took the time to point out why it made sense, as well as the beautiful significance of “Sharma”.

Prerna tweeted, “It’s just a last name being South Asian and having “Sheffield” as a name makes no sense anyways it’s not a big deal.”

A netizen, explaining the significance of the name tweeted, “Sharma means in Brahmin Hindu joyfulness and comfort. It’s a beautiful new surname for Kate since we know how much comfort and joy she brought to Anthony’s life!”

Another fan pointed out, “Ya’ll getting pressed over a surname change. She’s South Asian and not gunna have surname of Sheffield. Stop whitewashing, Sharma is fitting.”

Ambriel McIntyre tweeted, “Yes! An Indian surname is GREAT! Representation matters! This is amazing! The name Sheffield has zero significance in the books and even if it did, the show is its own thing. Let it breathe and grow.”

However other netizens like NK did point out that “To be fair, an Indian girl being named Kate in the 1800s doesn’t quite make sense either. Let’s hope they have an explanation for that.”

Even the choice of a fairly dark-skinned Ashely has sparked debate. Writes Mishma Nixon of Tempest, “As a dark-skinned Sri Lankan girl who literally never saw myself or an actress like me be portrayed as beautiful or in a love story of this proportions, Simone Ashley’s casting is a game-changer. Now I am going to see a woman who shares my skin color, who will get to wear pretty clothes and be thoroughly loved and cherished on-screen. I am emotional, I am ecstatic, and I am so, so, excited.”

And the Nominees Are: Riz Ahmed Will Join Allison Williams to Announce 2023 Oscar Nominations

Even author Julia Quinn is ecstatic. She chimed in with her own enthusiastic comments about the Simone Ashley casting. “WE HAVE OUR KATE!!!!! Welcome to #Bridgerton, @simoneasshley! I couldn’t dream of a more perfect Kate.”

The star developed her acting skills at the Arts Ed School in Chiswick, which specializes in Musical Theatre and Acting degrees.

Ashley has spoken on numerous occasions about coming from a traditional Indian family, who find her career in acting “quite scary and unsettling”.

The Twenty-five-year-old actress, in an interview with “Veylex”, Ashley described what it was like becoming an actress in an Indian family full of traditional academics: “They still find it quite scary and unsettling. There is no crystal ball, no security, and no guarantees, which can be a parent’s worst nightmare!”

She further told Veylex, “My parents are incredibly protective over me, and sometimes I found it quite stifling.

“It made me want to escape and do things my own way. I’ve always been a bit rebellious in that sense.”

“I am incredibly privileged to be a part of a generation where young women from all over the world have more opportunity than ever before, where we are being less stereotyped and walls and being broken down slowly.

“It can be hard for my parents to understand that sometimes, but I just try to empathize with them and reassure them that I’m going to be fine.”

Simone Ashley’s first TV role was as Zuhra in “Wolfblood”. She then appeared in “Guilt”, “Broadchurch” season 3 as Dana, and in “Doctors and Casualty”. She also recently appeared in “The Sister” as Elise Fox.

Production on season 2 is set to begin in London this spring.