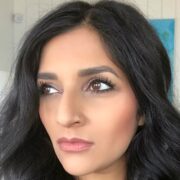 The Baby Formula Shortage: ‘Indian American Parents Understood the Gravity of the Situation Early On’

In the history of Hollywood, we have rarely seen South Asian representation – in fact, we’ve seen South Asian roles played by non-South Asian actors. Take Apu from “The Simpsons,” for example, whose voiceover was performed by Hank Azaria, a white actor – this not only took away an opportunity for South Asian actors to play one of the very few roles that were available to them but also perpetuated racial stereotypes.

And within the South Asian diaspora, it’s even rare to see Pakistani talent on the big screen. A study by the University of Southern California which looked at the prevalence and portrayal of Asian and Pacific Islanders (API) across 1,300 popular films, found that of API actors only 1.4% were Pakistani. That’s why the likes of Riz Ahmed and Jameela Jamil are so integral to the diversification of Hollywood.

Today, we are starting to see a shift and one that is far overdue. However, the numbers are still quite low – Asian and Pacific Islanders accounted for just under 6% of speaking roles and less than 4% of leads and co-leads. Only 3.5% of the films had an API director and 2.5% had an API producer.

Diversification across the board in filmmaking, from above-the-line to below-the-line talent, is necessary to move the needle further in the right direction and to allow younger generations and up-and-coming talent to recognize themselves and their potential in the industry.

Riz Ahmed, whose birth name is Rizwan Ahmed, recently won the Oscar for Best Live Action Short Film for “The Long Goodbye” – this felt like a huge win. Not only because it’s such an important story about togetherness in extremely divided times, but also because it’s a short film that is produced and co-written by Ahmed himself, and inspired by his album of the same name. Parts of the film were even improvised, giving the film an authentic and intimate feel.

In his Oscar acceptance speech, Ahmed said, “In such divided times, we believe that the role of story is to remind us that there is no us and them. It’s just us. And this is for everyone who feels like they don’t belong, anyone who feels like they’re stuck… you’re not alone, we’ll meet you there. That’s where the future is, peace.”

Ahmed is no stranger to accolades, he was previously nominated for an Oscar for his leading role in “Sound of Metal,” he won an Emmy for “The Night Of,” had an Emmy nomination for Outstanding Guest Actor in the show “Girls,” along with nominations for a BAFTA Film Award, AACTA International Award, Screen Actors Guild Award, among a plethora of others.

Pakistani-American comedian, actor, and screenwriter Kumail Nanjiani, who grew up in Karachi before moving to America at the age of 18, made his film debut in the 2010 romantic comedy “Life As We Know It.” Followed by many smaller roles in other films, all prior to his big break on TV with HBO’s “Silicon Valley.” And subsequently with the film “The Big Sick,” which was based on the real-life love story of him and his wife Emily V. Gordon. He not only starred in the film, but along with his wife, also wrote the charming film that delves into heavy topics from everyday relationship issues to illness, religion, navigating different cultures and clashes among generations.

Najiani has also been recognized for his outstanding skills with an Emmy nomination for his work on “The Twilight Zone,” an NAACP Image Awards nomination for “The Rock,” and multiple nominations and awards for Best Screenplay for “The Big Sick.”

Jameela Jamil, a Pakistani-British actress, brought laughter to all of our living rooms as Tahani on “The Good Place.” She started her acting career after moving to Los Angeles from London and landing a role on Parks and Recreation with no prior acting experience. She’s gone on to be the voice of Aunty Pushpa on “Mira, Royal Detective,” and has lent her voice-over skills on many shows including “Rugrats,” “Harley Quinn,” and “Animaniacs.”

She’s not only a talented actress with impeccable comedic timing, but she is also an advocate for body positivity, racial inclusivity, and women’s accomplishments.

The Only Way to Restore Women’s Reproductive Rights is Through Referendums, Not Elections

On her podcast titled “I Weigh with Jameela Jamil,” she celebrates progress and not perfection – challenging societal norms through thought-provoking, amusing, and vulnerable conversations about mental health. What simply started out as a social media post against unrealistic beauty and body-size standards has become a mental health movement with her popular podcast.

Jamil has always been one to call out the entertainment and media industry for their unhealthy standards and expectations of women, especially when it comes to promoting unhealthy body ideals – and we love her for it.

Visual effects artist Mir Zafar Ali, who went from Karachi to Hollywood, has won three Oscars for Best Visual Effects – first for his work on the 2007 film “The Golden Compass,” then for “The Life of Pi,” and most recently for “Frozen.” And he’s worked on a slew of other films including “X-Men: First Class,” “Spider-Man 3,” and “Percy Jackson: Sea of Monsters.”

He specializes in replicating natural phenomena such as water, fire, snow, or destruction. And does he ever do it well – he brought Richard Parker to life in “Life of Pi,” gave Elsa the power to create snowfall, and created the terrifying tsunami in New York in “The Day After Tomorrow.”

Hopefully, this progress is the beginning of a shift in Hollywood that leads to more roles for South Asian artists in front of the camera and behind the scenes.

Jia Wertz is a documentary filmmaker, podcaster, writer, and entrepreneur. She pursues stories that explore wrongful convictions in the name of protecting the social order. Her award-winning debut film, “Conviction,” chronicles the vagaries and inconsistencies of the American criminal justice system through the story of Jeffrey Deskovic who was wrongfully convicted of rape and murder. Jia is from Calgary, Alberta and currently lives in New York City with her husband and son.