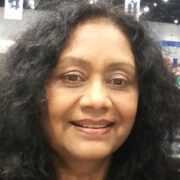 Anthropocene has plunged humanity into an unprecedented crisis, and people are scrambling to find a way out. Some of us are enacting extreme hatred for the perceived other under the delusion that we can survive as separate entities. In the United States, “Black Lives” matter the least, and in India hatred against women is reaching its peak. Just visualize a recent incident: Sarvesh Kumar walking on the streets of Hardoi with the head of his daughter that he had decapitated to protect his “honor.” If we come from the mythic world of the Subcontinent, surely, we may sense that we have entered a rather precarious time cycle.  This is the point of churning of the primordial milky ocean when devas and asuras are vying for the nectar of immortality but unaware that the churning will also produce deadly Kalkuta poison which is a kind of time-knot, kaal and kuta.

When that poison emerges, Shiva, pure consciousness, holds it in his neck that Parvati, his loving wife, tightly embraces.  Shiva after all is shava, a corpse, without the touch of Shakti. Only when he is suckled by Tara, the Great Mother as the Void, that his suffering is eased, and he is hailed as Nilakantha. The tale is instructive of the need for both devas and asuras to cooperate if they want the jewels, but the story shows how both try to cheat the other. Weakened devas are manipulative and want the amrit for themselves; they choose to grab the tail of the elemental serpent rope while the virile asuras end up with the fanged mouth. They also need what is beyond both death and immortality to hold the poison they produce, and that entity’s need for healing nourishment of the Mother Principle.

The Indian subcontinent has imagined Avatars that descend to our levels to help the humans who hold both devas and asuras within their inner worlds. But Avatars do not always take human forms. Vishnu saved the world during the time of Noah as the giant fish held the boat in its snout and is supposed to return as Kalki. However, since we cannot know the inscrutable ways of the Great Mother who nurtures the Avataras in her compassionate womb, is it is possible that this time she has sent a virus called Corona (Karuna) for us to pause the out-of-control unconscious machine we have created?

This is an extract and deplete ideology that has turned everyone in its thrall into hungry-ghosts, insatiable pretas amid plenty. This hungry ghost is also imaged in the head of Rahu, a disembodied intellect disconnected from wholeness or health, a sort of Cartesian androcentric thinker, lost in its own brain chatter. Under this dysfunctional mechanical system, most of the world is suffering from severe dis-eases of the mind and the body because we have lost our mooring on Mother Earth. This intelligent virus that affects our breathing apparatus is reminding us that we exist because of the trees, not because of our magic machines.  It at least momentarily made the Himalayas, the abode of Shiva, appear in the cleansed vision of an otherwise polluted northern Indian countryside.

A visionary physician Iain McGilchrist presents the insight in his book “The Master and His Emissary: The Divided Brain and the Making of the Western World” that we have become heavily dependent on one side of our brains, the left side that is mainly about certainty and being a separate entity, vital for survival but severely limited: “the left hemisphere needs certainty and needs to be right. The right hemisphere makes it possible to hold several ambiguous possibilities in suspension together without premature closure on one outcome.” A neuroanatomist Jill Bolte Taylor discovered this duality from inside out because she suffered a stroke. Under the spell of the left hemisphere, we have collectively digested the ideology of scarcity constructed by an economic system that depends upon our hypnotic slumber of deadly competition.

The question I pose is this: how did India, the land that tolerated ambiguity and understood the polarity of our being and developed inner technologies to balance the two, has fallen under its sway? How did a culture that knew the need for devas and asuras to work together and never created pure evil has been pitting neighbors against each other? How is it possible that a “Hindu” world that recites the mantra Vasudhaiva kutumbakam (all the world is family) creates laws like CAA? Today even overseas Indians are under suspicion as the new law about the OCI shows. How are we creating novel androcentric myths that wise mythologists like Devdutt Puttnaik are resisting?

Not to speak of abysmal degradation of the female body that makes India a deadly place for women. Worships Shakti and continues to rape and behead our daughters? I began writing my blog after that infamous Delhi case, and as Asha Shahjahan’s essay shows the struggle continues. Is it because we in our hubris have forgotten the power of the Great Mother? Yes, we do live in a subcontinent divided due to imperial and its resultant “epistemic violence”, but we are way past blame game now. We need to think what kind of insecurity makes a culture ape its oppressors.

Our two brains indicate the yin and the yang, shiva and shakti, devas and asuras, but there is something beyond the brain and the binary. In a world of strange conspiracy theories and certainties of religious ideologies, we have truly allowed the emissary to be the master. We have also unleashed the specter of an AI revolution that is taking over our life in unprecedented ways that thinkers like Yuval Noah Harari are warning us against. I have contemplated the scenario by renaming AI as awakened intelligence. It is good to remember that Harari goes to India for his Vipassana retreats where he learns ways to “hack our consciousness.” If we do not wake up to our true potential by dissolving the binary and holding both together, we will perish.

However, I want to trust accidental gods though and believe in fighters like Vandana Shiva and visionaries like Manda Scott that “We have the power of gods to destroy our home, but we also have the chance to become something we cannot yet imagine, and by doing so, to transform the nature of ourselves – and all humanity.” At a time when groups like Humanity Rising are gathering all the world’s thought leaders and compassionate actors and reimagining a planetary renewal, Indic world needs to enter the global dialog with a calm mind and open heart. We need to visualize a Subcontinental civilization if we want to escape the violence inherent in a divided world.  We have a different kind of Crisis in Civilization today, that we must overcome.

Together we can ward off this crisis and constitute a friendly Subcontinental civilization that embraces all or allow a magnificent treasure house of true inner strength to spiral out of control.  But spirals are regenerative. Brilliant leaders like Peter Merry are presenting new ways to harness spiral dynamics of development. However, they are quite old for a civilization that understood the Mother Principle. Adyashakti (potential energy) spirals into Jagatshakti (kinetic energy) in her manifest aspect, and all entities receive that imprint in their psyches. Agamic and tantric paths in India and many other indigenous ways have known this for millennia. They have been mapping the cosmos of our inner beings and developing ways to see the unity of above and below for a long time. We could welcome that old and yet new vision or unconsciously accept a deadly narrow ideology, bought, and sold in the marketplace of a plastic civilization.

Often, we ache for external saviors because we do not know ourselves. Many traditions await a savior: Second Coming of Christ, a Mehdi, a Maitreya Buddha.  However, Zen master Thich Nhat Hanh believes that Maitreya is the sangha, not an individual. Vajrayana Buddhism also envisions a collective coming together, a balancing, and transcendence of opposites, Mahasandhi/Dzogchen. It is a time when the great seal (Mahamudra/Noor Mohar of the Sufis) of our interconnected and interdependent mandala of existence within Indra’s net will reveal itself. If we are enmeshed in such an existence, we must recognize every entity, animate and inanimate, as a part of ourselves and realize deeper truths about humanity. Devas and asuras are us; Amrit and Kalkuta too are us. The novel Corona virus is an Avatar that has given us the lock downs and shelter in place ways to enter the inner world of our borderless beings and discover our own awakened avatar potential.

Dr. Neela Bhattacharya Saxena is Professor of English and Women’s and Gender Studies at Nassau Community College, NY.  She has published two books, “Absent Mother God of the West: A Kali Lover’s Journey into Christianity and Judaism,” and “In the Beginning IS Desire: Tracing Kali’s Footprints in Indian Literature.” Some of her other publications include, “Mapping the Chiasmus: Liberating Patterns in a Planetary Mandala”, “AI as Awakened Intelligence: Buddha, Kurzweil and the Film Her”, “Woman is ‘Antahprajnatmika’: A Spectrum of Enlightenment from Maradarikas to Female Buddhas in Tantric Buddhism,” “Iridescent Self in the Womb of the Wholly M(O)ther: A Vajrayani Meditation”, “Neither Theos Nor Logos: Indic Divine Mother Beyond Ontotheology”, “Prodigy, Poet, and Freedom Fighter: Sarojini Naidu, the Nightingale of India”, “Peopling an Unaccustomed Earth: Jhumpa Lahiri’s Supreme Fictional Journeys into Human Conditions” and “Gynocentric Thealogy of Tantric Hinduism:  A Meditation upon the Devi”. She writes a blog called “Stand Under the Mother Principle”. More information about her work can be found on her website.

Among the Palmettos: My Trip to Charleston was an Excursion Into the World of ‘The Great Santini’