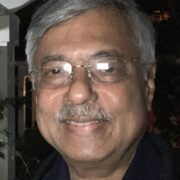 Ocean’s 4: The Quad Factor in the Indo-Pacific and Strategic Challenges for India

Human beings move. That’s obvious, and as Parag Khanna tells us in his new book, “Move: The Forces Uprooting Us,” is also fundamental. It’s human destiny. To move from home to work, from village to town and city, from one domestic region to another, and from country to country, across national borders and oceans, across continents, that’s what humans have done since the birth of the species 200,000 years ago and through history. Humans are not merely homo sapiens, the wise species, but also homo migrato, the migrating species. It is a comment on our present populist and ethno-nationalist times that something so basic and commonplace about human civilization merits yet another book, but Khanna is not merely debating the rise of a political countercyclical here, but forecasting the radical acceleration of a trend that could well become the defining demographic characteristic of future civilization. In his telling, the coming decades will witness human migrations on so grand a scale that all previous migrations will be dwarfed. This accelerated and amplified migration is not merely inevitable, says Khanna, but imperative for the good of the species and the planet. It is our destiny, says Khanna, which we must take hold of if we are to be truly distinct from our evolutionary ancestors, to be truly homo sapiens. A bold and startling thesis, and certainly a contrarian one in these xenophobic times.

Though no one can accuse Khanna of being ignorant of the minutiae of current realities – there is a wealth of granular detail in the book — his objective is clearly to deal with grand narratives panning the long arc of history and civilization. “Move” is matrixed on big ideas, abstracted away from the near-term reality of growing right-wing ethnonationalism which is crimping movement, from the proliferation of national borders and myriad new economic and physical barriers, and even from the Covid pandemic which suddenly brought all human movement across the planet to a near halt. This high-level view opens itself to the charge of being simplistic. But it cuts through the noise of the day, and compels our attention because it gets to the core of the problem in a way that is easily understood: migration is set to accelerate, and become the most defining trend of our near future and beyond. That is Khanna’s central proposition, and if it turns out to be even half right, we are clearly headed for a fundamentally different world than the one we have lived in, one in which geography is no longer linked to ethnic or racial markers, and where national identity and political boundaries become incidentals. “Move” therefore deserves to be discussed and debated and at the very least read widely.

The single biggest driver of accelerated migration is climate change, which Khanna thinks is all but inevitable, despite the (admittedly insufficient) efforts across the world to reduce greenhouse gases and stem the tide of global warming. For every 1 degree Centigrade rise in average temperature, says Khanna, one billion people will be compelled, by heat, drought, floods, cyclones, extreme weather, water stress, and rising oceans, to move to more climate-friendly geographies within nations, and across national borders to more hospitable climes in other nations. If all goes according to the Intergovernmental Panel on Climate Change’s non-binding 2015 agreements and wishes, temperature increases will be contained at 1.5 C by 2050, but Khanna is far from optimistic that this will happen and implies that actual temperature increases by the turn of the 21st century are more likely to be in the region of 3-4 degrees centigrade, which in turn means 3-4 billion people being compelled to migrate. Interestingly, the most potentially climate-stressed parts of the world such as India, Bangladesh, Pakistan, China, Indonesia, Philippines, Nigeria, and some others, are also the most populated regions with a combined population of over 4 billion people. They are also relatively young, capable and willing to move.

There is a flip, positive, side of this scenario of climate-induced migration, says Khanna. Vast regions of the world which were hitherto thinly populated, even depopulated rust belts, will become climate oases in the foreseeable future and thus become much more attractive to migrants. Russia and Canada, parts of northern Europe, the vast central Asian republic of Kazakhstan, and other pockets in a number of countries, are population poor but have huge landmasses which are currently frozen tundra or inhospitable terrain, but which in the wake of warming, could thaw out and become prime agricultural and urban land, capable of sustaining much larger populations. These are precisely the areas that have plenty of freshwater too, and thus have a much greater carrying capacity. Should these nations and regions actively encourage migration from overpopulated and climate-stressed parts of the world, they could become economic superpowers in the future.

Admittedly, dramatic predictions such as these are obviously based on assumptions that can and should be debated but can’t be dismissed out of hand. Surely, however much one may argue with them, they are within the realm of possibility, if only in a near worst-case scenario. Compare the 3-4 billion potential movers to the 275 million people who currently live and work in nations other than the ones in which they were born, and that’s an order of magnitude larger, and vastly bigger than anything that has happened in the historical record. That is the undergirding of Khanna’s basic proposition: migration will increase manyfold despite countervailing attempts to constrain and restrict it.

There are other accelerants as well, says Khanna. For starters, given the very logic of development, the world is becoming increasingly connected with a growing network of roads, ports, airports, gas and oil pipelines, power and data cables, and satellites. This growing infrastructure encourages the movement of goods and ideas, but more importantly, of people. There is a direct correlation between infrastructure growth and the movement of people. Additionally, existing cities are growing and expanding and new ones are rising, which pull in people from rural settlements and smaller towns, and increasingly from other nations. Urban growth is a big driver of migration. Digital technologies further strengthen this infrastructure push factor by enabling people to work remotely, thus facilitating migration to places that suit the preferences of individuals better than their current locations. We have certainly seen a lot of this happen in the wake of Covid, and it will become more extensive in the future.

Demographics are another pull factor: most developed rich nations and even some middle-income nations such as China have gone into a phase of demographic decline and can only sustain current growth trajectories and lifestyles by bringing in immigrants to make up for the shortfall of a domestically born labor force. At a more global level, the world population is now projected to stabilize around 9 billion people, which means that the era of growing populations is coming to an end. In such an environment, people with the right skills will be in short supply and every city and country will have to compete to attract the people with the required skills, which translates into more migration. Population size and structure will then become the key ingredient to economic power.

Nindu Kunda, Pavitra Patra: How ‘Kantara’ Made Me Think About Life, Time and the Roles We Play in Them

Though Khanna is a climate pessimist, he is a political utopian and optimist who sees migration as unstoppable anyway and therefore favors a borderless world where people are free to move away from overpopulated and resource-scarce areas to ones where resources are plentiful and populations scarce. His optimism is founded on the fact that mass migration has already transformed most parts of the world, with many hitherto ‘white’ nations already containing 15-20 % immigrant populations, and even such insular monoracial nations as Japan are beginning to open up now. While xenophobia has ebbed and flowed through history, even during the most xenophobic phases migration has never stopped entirely, and in some instances, actually increased, as for instance when the Trump administration went out on a limb to recruit doctors and nurses from around the world during the Covid pandemic and Boris Johnson pulled out all stops to bring back truck drivers from Europe who had been pushed out in the wake of Brexit.

Khanna is by profession a forecaster and strategic analyst who paints scenarios of the probable future. He writes with a flourish, for impact and persuasion, and is therefore very readable, even enjoyable. He is not an academic who presents guarded, hedged and nuanced analysis. One can thus see academics faulting him for the absence of a more detailed discussion of the impact of climate change on migration, or of the economic benefits and costs of migration. For anyone interested in such detail, there are plenty of references in the appendix to explore further. For others, the book offers plenty of food for thought and reading pleasure too.

Michael Neri is a journalist and researcher based in Fort Lauderdale, Florida.