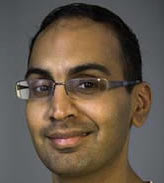 In 2004 I was dispatched to India to cover the aftermath of the devastating tsunami, and afterward, I took the opportunity to spend time with my grandfather in Chennai and listen to stories about his experiences living in the colonial era of India.

My grandfather, or thatha, grew up poor in the Indian state of Tamil Nadu. For Hindus in his village to get what was considered a good education, families pooled or borrowed their money or, in the extreme, converted to Christianity: Christian missionaries frequently visited Hindu homes to offer a free education in exchange for conversion, and a number of my grandfather’s peers converted as a way of getting out of poverty.

My grandfather’s stories helped me to understand how colonial rule impacted the faith of generations of Indian Hindus and the practices they passed down to their children born and raised in the United States. For his generation and my father’s, defining what it means to be Hindu, and Indian is still very difficult.

My dad was born in 1946, a year before India’s independence from British rule. (My mother was born a decade later in Puducherry, which would only become wholly independent of French rule in 1963.) Growing up in newly independent India, his post-World War II, post-independence generation was encouraged to adopt a certain style of secularism that was embedded within India’s new social fabric. Many were also educated in Christian schools, where they were taught a completely different idea of religion than what they learned at home. That in turn informed how that generation practiced its faith when Indians began moving to the United States after 1965.

The staunchness with which many Indian Hindus believed in the idea of dogmatic secularism meant that many of them carried with them a distinct shame of simply being Hindu or didn’t know why they said the prayers or performed the rituals they did. Hinduism’s core philosophies were largely ignored or misunderstood.

I still meet older Indian Hindus who are reluctant to identify as Hindu, even if they are regular temple-goers and are devotees of a specific sampradaya, or Hindu tradition. As one older friend told me, many in his generation were more schooled on the Baltimore Catechism than they were on the Vedas, Upanishads and other Hindu texts. Many in my dad’s generation, now retired, are only now finally taking the time to understand more about a religion they were born into but didn’t really know.

As a result, the trauma of colonialism has never been fully processed, and many Indian Hindu immigrants were unable or unwilling to acknowledge the ways in which their religious and spiritual illiteracy impacted their self-conceptualization in the United States, where they were often marginalized religious minorities and frequently had to apologize for their “foreignness.” Many in my parents’ generation took on American (Christian) names and tried to explain Hinduism to friends in distinctly Abrahamic terms.

Their experience was very different from those of diasporic Hindus from countries such as Guyana, Trinidad & Tobago, Malaysia, Fiji, Pakistan, Bangladesh, Sri Lanka and South Africa, where Hindus were (and are) under constant threat, persecution and marginalization. It’s easy to see why Hindus from outside of India feel more protective about their identity and sense of community.

I grew up in the 1970s and 1980s, and for many of my generation, Hinduism has been a burden to carry. Some of us remember vividly the Dot buster attacks targeting Hindus in the 1980s. My middle school social studies teacher once asked me if an infamous “chilled monkey brains” scene from “Indiana Jones and the Temple of Doom” was common Hindu practice. For the longest time, I simply kept Hinduism at home. I didn’t know many other Hindus, and those I did know through family networks slowly lost interest in practice or trying to understand their Hindu identity. Often, they believed the Indian customs their parents interpreted to be religious were archaic or defended as “that’s the way things have always been.”

Hinduphobic Attacks in N.Y. and Calif.: Indian American Community Must Look at its Own Role in the Erasure of Hindu Voices

It wasn’t until college, where I was proselytized almost daily by the Campus Crusade for Christ, that I became aware of how precarious my sense of Hinduness was. I became more cognizant of my identity and grew to understand that if my Christian and Muslim friends had no issue identifying with their faith, I didn’t need to have any, either. I grew upset at my parents and their generation for not equipping mine with the tools we needed to cope with being religious minorities in a mostly Christian country.

Today, as a parent, I’ve come to understand better that the trauma of independence had a more significant impact on my parents’ and grandparents’ generations than I ever realized. Some, like my dad, have become much more religious and curious in their later stages in life. I have friends in my age group — including some who at one point left the faith only to return later — who have also taken a more active role in understanding Hinduism and explaining it to their kids. I’m now far more empathetic to those previous generations who never had a chance to connect with their faith through shared understanding and dialogue.

Perhaps that sense of decolonizing has come too late for some, but it’s still important to note that for many Indian and Indian American Hindus, the sense of identity and connection to a spiritual home is still a work in progress. Even as India continues its own journey from the vestiges of colonialism, Hinduism will continue to evolve and adapt to the changing attitudes and views of the billion people worldwide who embrace it.

(This story was first published in Religion News Service)

Murali Balaji is a journalist and a lecturer at the Annenberg School for Communication at the University of Pennsylvania. His books include “Digital Hinduism” and “The Professor and the Pupil,” a political biography of W.E.B. Du Bois and Paul Robeson.