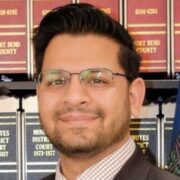 As every Desi knows, there are only two noteworthy phases of a person’s life. The youthful time spent in pursuit and anticipation of getting married, and the societal oblivion of a person’s existence after their wedding. Thus, it’s no wonder that weddings are perhaps the most momentous events of the Desi calendar.

Trump ruined the wedding season, including mine.

Trump didn’t cause Covid-19, but he did create the American Pandemic. He dismantled the pandemic task force in the White House upon taking office, he ignored the advice of the CDC and top public health advisors in January and February, and willfully denied taking any responsibility of a coordinated response once the virus had found a foothold in this country.

By downplaying the virus early on, denying the use of masks well into the summer, and creating a scarcity of protective equipment for frontline workers, Trump’s asinine decision-making brought the great American Superpower down to its knees and resulted in the deaths of over 180,000 people (and counting).

Oh, and he ruined my wedding.

By not implementing contact tracing and mandatory shutdowns, the virus spread and forced the closure of large venues, including wedding venues. By not calling the pandemic an Act of God, he prevented thousands of people and companies from being able to collect insurance and therefore lose their deposits and their business, helping lead to wholesale collapses in the retail and hospitality sectors.

Between my engaged friends and I, we lost thousands of dollars in flight tickets and venues, hundreds of hours of planning, family, and celebration, and we all face the uncertainty that weddings may never happen in the near future and that they are indefinitely postponed. So much uncertainty. I haven’t seen a cousin in over half a year.

My better half hasn’t seen her parents, grandparents, or sister in two years, and will not for the foreseeable future. My friends and I discuss smaller ceremonies and work arounds, but the truth is clear. Even the smallest of weddings is too risky. How could we live with ourselves if a parent, uncle, or grandparent were to get sick because our vanity for having a special moment.

By denying the true threat of the virus, Trump withdrew America from the national stage, allowing other countries to coordinate an international response, like America had done during Ebola, SARS, MERS, and a host of other international outbreaks over the last century. Now there is a wall surrounding America as we are banned from traveling to all but a handful of similarly distressed nations in the world. Practically, it means I can’t go to India to get my clothes, invitations, and other supplies. It means starting our lives quietly and not with a loud bang.

How a Hindutva Faction in the U.S. is Openly Fundraising to Demolish Christian Churches in India

Over six months into quarantine and the prognosis is only getting worse. Several groomsmen — an anesthesiologist forced to cover ICU shifts in his hospital, a nurse practitioner at a local Emergency Clinic, the husband of a local hospital nurse, have all had the virus, given it to their spouses, and are worried they may get it again. The truth is Desis are the frontline health professionals. It’s hitting our community the hard. Needless to say, the bachelor party is cancelled. We can’t risk gathering right now.

With weddings cancelled, only funerals fill the calendar. I’ve had two great uncles and a great aunt pass away from the virus after spending weeks in the hospital. No family was able to see them, and only a select few were at the burial. The funeral service and prayers were held virtually. Consolation was given through texts instead of hugs. Trump and his loyal band of Republicans did this. The experts told them what to do. They were ignored. We suffered.

So, there is no wedding season in 2020. No open bars and choreographed dances. No beautiful clothes and family travelling across the world for a special day. No bachelor parties or mehndi. No terrible uncle speeches or catered buffets. No Desi gatherings that are the culmination of our culture here in America. All because of Trump and the Republicans who enable him.

This November we must vote for Biden and Democrats up and down the ballot. We need educated leadership and a party that believes in science and public health. Because if we don’t there won’t be a wedding season in 2021 either.

Ali Hasanali is currently a prosecutor and licensed attorney for over seven years. He’s been involved heavily with campaigns ranging from school board and city council to U.S. Congress for over ten years, including serving as Political Director for the 2018 Kulkarni For Congress Campaign and developing their innovative relational AAPI strategy. Additionally, he is on the exec board of Asian American Democrats of Texas — Houston Chapter and the Fort Bend Young Democrats. He is a member of the TSB TX Core Team and is a co-lead in developing persuasion content and strategy for TSB and assisting in relational data analysis of South Asians in Texas. He received a B.A. in Chemistry and Political Science from Case Western Reserve University in 2009 and received his law degree from Case Western Reserve University School of Law in 2013.