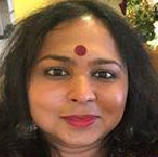 Manjamma Jogathi made history when she became the first trans-woman to be awarded the Padma Shri, India’s highest civilian award, last week. Clips of her gracefully offering blessings to President of India Ram Nath Kovind with the end of her beautiful red, purple, and gold sari as he handed her the award, were shared across media platforms for days and went viral. Traditionally, the blessings of a transgender person are said to bring good fortune.

Like many things in South Asia, the challenges faced by queer/trans-Hindus are complex and often contradictory. Centuries of Hindu, Buddhist, and Jain tradition acknowledge the existence of a third gender (tritya prakriti), and there are centuries of distinct trans (hijra and kinnar) folk traditions — including in Indian Muslim and Christian communities.

Manjamma discovered she was trans at 15. Her parents took her to a local temple to perform the Jogappa, a ritual involving marriage to a deity (often the goddess Yellamma). Yet despite such spiritual affirmation, her parents promptly disowned her when the ceremony was done. And just like countless other trans people worldwide, Jogathi was out on the streets. And like myself and over half of the trans women in America (particularly trans women of color), she experienced the humiliating terror of sexual assault and rape.

We observe the International Trans Day of Remembrance because, for most of us, the constant threat of violence is the defining feature of our existence. Some of us, whether Jogathi or my trans daughter Anjali, a televangelist with over one million views and 70,000 subscribers on YouTube, can move past the trauma.

But let’s be clear, that isn’t the norm.

As both a trans woman and advocate, I’ve experienced and witnessed the same trauma repeating itself across the world, including the numerous diverse religious, ethnic, and caste communities of South Asia. Families throwing out their queer, trans, non-binary, hijra, or kinnar children. Young and defenseless kids quickly discovering the extent of human darkness in a society rife with transphobia. Society tells them they deserve it. Such trauma, however, is also what unites diverse queer/trans people into chosen families and pushes me to do whatever it takes to save trans lives.

My late friend Devi Ashima (“DeviMa”) exemplified this paradox of being steeped in tradition yet relegated to the margins. Like me, she was a devout Hindu. She’d often point out that Hinduism doesn’t emphasize sex or gender, but rather the soul. Whether an issue of insufficient decolonizing of attitudes or compassion, most Hindus around her were, in practice, not willing to acknowledge, let alone embrace traditional inclusion of gender-expansive and fluid folx.

Nevertheless, she exuded warmth and kindness. She was a fantastic chef — cooking for friends, community events, and on the job at a South Asian LGBTQ-owned restaurant. In exchange for her devotion, rather than appreciation, she received generous helpings of abuse and exploitation at work and malicious indifference everywhere else. And then she got cancer. She was in Portland getting ready to open her own restaurant when it finally killed her. Her family rushed to collect her belongings, but couldn’t be bothered to send her off in dignity.

Two years later, another trans life was similarly cut short just as things were looking up. When Dona, a fierce trans advocate from a predominantly Christian Adivasi community in India’s Northeast passed away, her family also refused to claim the body. Dona had just been awarded a SITAL grant through Parivar Bay Area, a South Asian trans organization I co-founded in 2018, that would have gone towards fulfilling her lifelong dream of opening her own beauty salon.

DeviMa and Dona serve as aspirations every trans person is entitled to have. Every trans life is precious and saving trans lives is the fundamental mission of my organization. Everything else is secondary. And there is hope. During the second COVID wave that devastated India, thousands of trans people were on the brink of starvation and death. With nationwide lockdowns, they were suddenly cut off from their key sources of revenue such as begging, offering religious blessings, or sex work — all of which require freedom of movement. Combined with routinely being blocked from hospitals, shelters, aid, or even basic services, they were once again left to rot.

I knocked on many, many doors — almost none opened. As I was losing hope, Sewa International Bharat, a Hindu faith-based, humanitarian, nonprofit service organization stepped in. Their generous and rapid deployment of financial and logistical resources helped deliver 85,000 emergency kits containing food, medicine, and PPE to trans communities in 26 states across India. They saved thousands of lives. Later, they came back to help rebuild trans lives by funding projects such as Dona’s beauty salon. They even helped organize an event to honor the trans life of my friend DeviMa.

How many more trans people would be alive if they weren’t cast out by their families? What if we received love and compassion during our most difficult times? What if people viewed us as deserving of dignity and inclusion instead of brutality and erasure? What if in today’s more progressive public discourse, trans people were more than props to demonstrate “allyship”?” These are questions all communities need to be asking themselves — including my own.

Of course, the generosity of Hindu organizations or inclusive themes found in Hindu texts does not absolve Hindus of the responsibility of confronting the damage caused by societal shame and transphobia. Neither does the Indian government’s decision to award a trans woman the Padma Shri imply India is and always has been some sort of trans utopia. There is a long way to go and many difficult conversations to have. However, showing up to help honor and save trans lives is a great start. And for that, my door is always open.

Anjali Rimi pronouns are she/they. Anjali is a proud South Asian Hindu Canadian American woman of trans experience based in the San Francisco Bay Area. She was born in India, blossomed in Canada, belonging in the United States. She is the president and co-founder of America’s only Trans-led, Trans-centering South Asian Queer organization of Parivar Bay Area. The organization focuses on centering Trans equity, economic justice within South Asian Diaspora. Parivar’s current initiative SITAL, the largest pan-India grassroots initiative is saving Trans Hijra lives across 26 states, with over 1 crore of funds disbursed. Anjali currently serves on the boards for The LGBT Asylum Project and San Francisco Pride. She holds an MBA and works as a business development executive in the wine industry. As a Diversity Equity Inclusion (DEI) coach, Rimi helps companies cultivate Trans LGB inclusive workplaces. She works with leaders at every level across Fortune 500, corporate and nonprofit foundations.