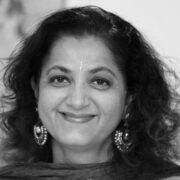 Anticipation. Fear. Hope. Excitement. Above all, a looming sense of uncertainty that has sadly grown to be second nature in the last four years. For anyone paying attention across this broken country, this weird mix of emotions will sound familiar. As a citizen, a woman of color, an immigrant, and a human being, it’s how I felt in the days leading up to a vice presidential debate that would make history. But this isn’t how I should’ve felt at all. It made me angry.

I’ve always watched election year debates, first with my parents, then my husband, and now our adult sons. It’s a time to learn about policies and the people running—but like everything else, debates have shifted to strange, dangerous territory we never thought we’d see. This time, it was all about a pandemic that has cost us over 200,000 precious lives and millions of livelihoods, one that threatens the entire way the world works. It was about pressure, the centuries of expectations on the shoulders of one woman, the first Black and South Asian female on a presidential ticket.

And most ridiculous, it was also about, of all things, plexiglass. The simple barrier of safety against a deadly virus that further divided campaigns—one side that followed public health guidelines and protocols, and one side that refused to. Before a single word was said, the differences could not have been more clear. And I found myself worrying for the safety of my candidate instead of enjoying a moment I knew she was ready for. This made me even angrier, triggering rage held since 2016, when another woman I fiercely admired was left unprotected—and was actually stalked onstage.

They installed the plexiglass. It looked flimsy and inadequate, not nearly enough to shield us from whatever was on the other side. And the chairs still looked too close together. For some reason, the opponent had asked to be seated instead of standing to face her—another odd thing. But there was my beautiful Senator, Kamala Devi Harris.

Our hope and the promise of the Democratic party. Poised. Smiling, as always. Prepared. And absolutely focused on meeting her moment in history with grace and grit. Her first point jumped right into it: This administration is the greatest failure in history. Ouch. She was completely focused but also at ease. Noticeably, her opponent looked pale and nervous, tight in expression and rigid in demeanor as he recited his rehearsed talking points.

In stark contrast, Sen. Harris was fluid, open, colorful, and dynamic, playing offense and coming out swinging. “They lied to you…They’re coming for you…they don’t respect you…they knew and didn’t tell you.” From health care to tax evasion to truths about the pandemic, she made point after effective point and counterpoint. At times, the opponent looked visibly pained by her arguments and in obvious discomfort. My husband and adult sons were cheering for her, on the edge of their seats. That was enough to warm my heart and finally embrace my excitement.

As his inevitable interruptions started and got worse, I was thrilled to see the innovative way that Sen. Harris handled them. When the moderator followed the status quo of “thank you, sir” and “please” to weakly address an opponent who kept talking past his allotted time and taking hers, my candidate seized the mike. “I’m speaking,” she said pointedly and with purpose, looking him straight in the eye with a polite tone. This has already become a mantra among girls and women and female journalists, and a t-shirt slogan in line with “nevertheless, she persisted” and “reclaiming my time.” “He interrupted me. I would like my time back. I need equal time.” They weren’t complaints or admonishments—just facts.

And every time Sen. Harris stated the facts in a decidedly professional tone, she was given her time back. She didn’t wait for a no. She just took what she deserved with grace. In the end, she actually had a few more seconds on the clock than he did! As I watched, I was so grateful that girls and young women were also watching with me. This was a masterclass for any woman in the public or corporate arena who has to fight to be heard and seen and valued. And it was deeply inspiring.

At the end of the night, it was as clear as the divider between them that she had won. We could’ve easily watched the whole thing on mute, as her expressions alone won the night. In her knowing smiles, candid glances, amused eyebrow raising, and delightful stares of disapproval, she communicated what many of us were thinking at every moment.

She has always said that a woman of color brings marginalized voices with her to the arena, and I certainly heard my voice on the debate stage that night. She made it look relatively normal, but it was anything but. Like the Devis of our culture who fight injustice and evil, Kamala Devi Harris came to slay demons and fight for the truth. With an expert hand, she fought sexism, racism, propaganda, and fear, shedding light on their darkness. Following her courageous predecessors, she tore down even more barriers and brought us closer to long-denied equity in our nation. And she did it all with that joyful sparkle in her eyes that has become her signature. That joy could be our future.

Vinita Jha is an inspired voter in Southern California who has joyfully cast her ballot with hope for the future. Please join her in voting early and ask your friends and family to do the same.