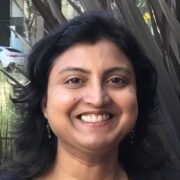 When I was born in India, a female leader ruled the nation. Indira Gandhi, the first and only female Prime Minister of India, loomed large over my childhood.

As my parents read the morning newspaper with their coffee, I was introduced to politics through Newspaper cartoons. Cartoons that frequently depicted her as a power-hungry tyrant keeping her party under her thumb. I was too young to understand her policies or politics. But the glass ceiling never existed in my mind, as I learned women were just as capable as men to rule a new democracy. While soaring to similar heights, they were equally capable of steep descents. While I was still in elementary school, the nation mourned her death. I remember being sent home early from school that day for fear of unrest. What stays vividly in my mind is my neighborhood aunties in tears at her death.

Boys my age grew up with a female leader as well. Their first portrait of a leader was female. In subtle ways, even in a largely patriarchal society, this impacted all of us. I found ready acceptance in high school and college for being a nerdy bookish girl.

In my early 20s, I moved to the oldest democracy in the world. America, the beacon for the world, had a stain. It had not elected a female President in over 200 years. Nor had my adopted state California ever elected a female Governor.

The next morning at work, women congregated around the water coolers or in the ladies’ room. We whispered and teared up, regardless of party affiliation, about when another female candidate would even be competitive. I mourned the lack of a role model for my daughters like I had growing up.

In 2020, a record number of women ran during the presidential primary, a heartening sign of change to come. The election itself turned out to be between two male candidates. Then the hearts of millions of women soared as the Vice-Presidential pick was announced.

Sen. Kamala Harris’s historical nomination gave hope to countless women, especially women of color. She is my homestate Senator and my Attorney General before that. More importantly, her mother hailed from my home town Madras (Chennai now).

Shymala Gopalan’s journey from India to California is fascinating. I wish I had an opportunity to meet her or get to know her. She must have been a remarkable woman to come to the U.S. at 19. In an age before the internet or even regular phone service to India, she arrived alone in a foreign land and made it her home. This is the story of millions of immigrants who come to America to pursue their dreams. This land of opportunity has mostly welcomed us.

What she would have felt at her daughter’s rise, I could guess. As an immigrant and mother of two daughters like her, my heart swelled on hearing Sen. Harris’s shoutout to her chithis (her aunts).

On election night, I watched the results on TV and scrolled through the tweets on my phone, and refreshed pages on my laptop. What an emotional roller coaster the last few days have been. Some states counted mail ballots first, and others counted the in-person ones. So the lead flipped from one party to another as the night progressed. The red shift and blue shift caused heartburn in many of us.

While we wait for the larger ceiling to shatter, I am savoring this small victory. For my daughters and millions of other girls aspiring for great things.

Prasanna Madabushi lives in California with her husband and two daughters. She works in technology and thrives in leading a global team to solve real problems. She likes to escape reality by writing historical fantasy loosely based on medieval India. You can find her debut novel “Heir to Malla” at annabushi.com.