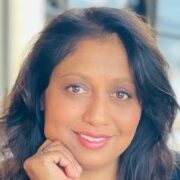 I am the daughter of immigrants from India. My parents came here in 1969, just shy of a year before I became the first-born American in our family of four. My father was a mathematics professor. My mom took care of our family and worked full time at a bank. We were the only Indian kids in our school back then but thought of ourselves as fully American. My sister and I participated in many activities. We took music lessons, violin, voice, piano and dance. I participated in the school choir and musicals, was the editor of our class yearbook, and even took horse riding lessons. I played soccer, ran track and participated in a program called project adventure which was my first inspiration for military service.

Academically, I excelled in English and literature which influenced my future decision to study journalism and writing. Like many American teens in the 1980s, I had a poster from the movie “Top Gun” on my bedroom wall and listened to songs from the movie like “Highway to the Danger Zone” and “Take My Breath Away.”

Life for us was usual and unusual. During the week we were American but on weekends we were engaged in our Indian culture. My parents had friends from the Indian community that we would get together with for socializing and sometimes for religious events. At home, we spoke Tamil. My parents were proudly South Indian but atypical for the time because they impressed upon us children to embrace all that America had to offer.

My father spoke many languages fluently, both Indian and European alike. My Mom once told me that she and my dad did not leave India and all of their family and friends and move to America only to try and raise us in the traditional Indian ways. She explained to me that they could have stayed in India to do that. While they wanted us to acknowledge and understand our Indian heritage, our parents wanted us girls to grab life by the horns and chart our own unique paths in this place that to them was still a brave new world.

When I started college in 1988, I simultaneously enrolled in the Army Reserve Officer Training Corps (ROTC). This rigorous four-year training program coincides with university studies to result in commissioning as an officer in the U.S. Army. Following my freshman year of college, I was sent to Airborne training school to learn how to become a U.S. Army paratrooper.

In 1989 women were trying to break barriers and my presence at this elite combat training school was, to put it mildly, in the minority. There I was at Fort Benning, GA with 500 men and about 25 women learning to parachute out of C-130 and C-141 aircraft. (There is much more that consequently happened in my life due to Airborne school, but I’ll save that for another story).

I succeeded at Airborne school and am proud to say that in 1989 I became the first Indian American woman to become a U.S. Army paratrooper. After graduating from college and being commissioned as a U.S. Army Signal Officer I did some military training in Georgia but then moved to Washington, D.C. to start my full-time career as a journalist. It was at this time that under a very happenstance occurrence I met my husband Damien Christopher who today is Retired Navy Commander Damien Christopher.

Damien grew up in Chicago, Illinois and went to college at the United States Naval Academy, whereupon his graduation and commissioning in 1992, he was selected for aviation. After flight school in Pensacola, FL, and Meridian, MS (where he graduated first in his class and received the “Top Gun” Award), he was selected to fly F/A-18s. Over the next 20 years, Damien flew F-18 fighter jets off of aircraft carriers around the world. He has deployed into combat multiple times for months at a time. Damien was a military fellow to the late Senator John McCain. He also proudly served as the Commanding Officer of the VFA-136 Knighthawks squadron, whom he successfully lead into combat.

We raised our two sons in the military lifestyle which meant moving regularly and switching schools, changing jobs, making new friends everywhere we went, setting up new homes, and counting the months and days until dad returned home from deployment. Though his call sign was “Satan” when he flew jets, and he conducted a mission in the skies that I’m sure instilled fear, Damien’s personality is one of kindness and sensitivity.

Unlike what the movie “Top Gun” depicts, most fighter pilots are very humble and studious by nature. Their backgrounds tend to be in the field of physics, aerospace, and mechanical engineering. Every day during those twenty years (when he was not deployed), I watched my “Maverick” husband wake up between 3:30 and 5:30 am, don a green flight suit, down a quick breakfast, kiss the kids and me goodbye, as he went off to train in the finest fighter jets in the world. I never saw him take a day off of work or complain that his job was too stressful. He seemed to handle whatever came his way and take it in stride. A true and consummate leader.

Like the movie, Damien put his family and service to his country before all else. When we were first married 27 years ago, when he was assigned to his first squadron as a young lieutenant, my late father used to call Damien Superman. I still remember when he would walk through the door with his green flight suit on and say, “Appa, I’m only as good as my last flight.” Our two sons are pretty close to the age we were back then, and I do not know that they would view their dad as Superman or Tom Cruise’s Maverick, but I do believe they greatly respect the sacrifices he has made and hopefully they carry with them the lessons we all learned along the way too. There have been many.

Damien retired from the Navy over a decade ago and has since continued to fly as a senior test pilot for Gulfstream Aerospace. I’m pretty sure this type of flying is much more his speed these days. Outside of flying Gulfstreams, we own a small Mooney aircraft that we enjoy flying in together. I always know I’m safe with my “Top Gun” piloting our aircraft. Life has truly proven to be a great adventure with all of its highs and its lows. We have definitely had both. It does take heroic people willing to put a cause greater than themselves before all else to achieve great things. I can assuredly say that Damien and I both believe that my parents are our true heroes. We thank them for being so courageous and open-minded in moving thousands of miles from India back in the 1960s to give us the opportunities of a lifetime that have truly taken our breath away.

Supriya Christopher has 25 years of professional experience in communications, writing and acting. She began her career in broadcasting as an anchor with USA Today and then ABC News. She was also a candidate for State Delegate in Virginia Beach, VA. Supriya received her undergraduate degree in communications from Seton Hall University and her master’s degree in writing from Johns Hopkins University. She was commissioned as an officer in the U.S. Army Signal Corps and is the first female Indian American U.S. Army paratrooper. Some of Supriya’s published works include articles in The Military Engineer, The Army’s Environmental Update, Beach Magazine, and Mass Ave Review. She has acted in various TV series, short films, promo videos, and commercials. Supriya is married to retired Naval F/A-18 pilot and presently Gulfstream Senior Test Pilot Commander Damien Christopher. The Christophers have two adult sons and reside in Savannah, Georgia.