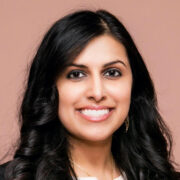 I was on pins and needles as sources reported Joe Biden was about to announce his vice presidential running mate. I couldn’t concentrate on anything else. It has been a traumatic four years as the American people have endured the madness of the Trump administration with its anti-immigrant policies, anti-Black racism, misogyny, and outright denial of science that has led to the death of over 160,000 Americans in the COVID-19 pandemic.

Immigrant communities like ours have had to question whether we can safely exist in Trump’s America where families are callously ripped apart and children are detained with no coherent plan or commitment to reunite them with their loved ones. I had been anxiously awaiting this decision for months, wanting to know the full ticket I would support as a much-needed change in leadership.

The selection of Kamala Harris as Joe Biden’s running mate made me jump with joy. For the South Asian community in particular, this is a powerful milestone. The next vice president of the United States will be a South Asian American woman.

For good reason, at this crucial point in our country’s history, the media has primarily focused on the significance of Harris’s Black identity. Over the past several months, there has been a renewed focus on the need to address the pervasive anti-Black racism in response to the killings of George Floyd, Ahmaud Arbery, Breonna Taylor, and far too many other innocent Black Americans.

Many South Asian organizations and leaders have spoken in solidarity with the Black Lives Matter movement and are committed to addressing anti-Black racism in this country. We also need to understand that South Asian Americans enjoy the rights we have today because of the advocacy of the Black community, including the ability for people from our racial and ethnic backgrounds to immigrate to this country and become citizens.

It is my hope that the leadership of Kamala Harris will inspire South Asian Americans to root out anti-Blackness in our communities and work in solidarity for the shared goal of racial justice.

We should rejoice in what the selection of Kamala Harris means for children growing up in this country. When I asked my husband to turn on the television and watch the announcement, my six-year-old daughter asked what was going on. I told her the vice presidential candidate had been selected and asked her if she wanted to be president someday.

This seems so much more possible now than when I was a child. I was born and raised in Chicago when the South Asian community was relatively small. I always felt like an insider and an outsider at once. I was usually the only South Asian girl in my class and I hardly ever saw a person from my background on television, let alone in elected office.

Yet, my interest in public service persisted. I have been working with a group of women to create an organization called Inspiring South Asian American Women (ISAAW) specifically to encourage more women from our communities to get involved in politics and public service.

When I first ran for office, I was asked why more Asian Americans in our township were not involved in public service. I responded, “if you go to a township committee meeting and don’t see anyone who looks at all like you in the room, you might question if you even belong in such a space.”

Kamala Harris’s selection as vice presidential nominee is a sign that we DO belong. Our voices are welcome, and our perspectives are needed in public service from local contexts to the most powerful positions in our federal government. Kamala Harris’s story is our story. Let’s celebrate this milestone together!

Sadaf Jaffer is an elected official, scholar, and activist. She was elected to the Montgomery Township Committee in 2017. In January of 2019, she was sworn in as mayor, becoming the first South Asian woman to serve as mayor of a municipality in New Jersey, and the first Muslim woman to serve as the mayor of a municipality in the United States. Jaffer founded Montgomery Mosaic to combat prejudice and build connections throughout the community. Jaffer is also a Postdoctoral Research Associate at Princeton University where she teaches courses on South Asian, Islamic, and Asian American Studies. She earned her bachelor’s degree in Foreign Service from Georgetown University and obtained her PhD in Near Eastern Languages and Civilizations from Harvard University with a secondary field in studies of Women, Gender, and Sexuality.