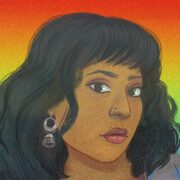 In elementary school, when other kids sat with their Lunchables or with fruit roll-ups dangling from their mouths, I would eat my daal and rice with a spoon, holding the Tupperware close to my face so the trip from the container to my mouth was a short one. I was desperate not to be seen. When the other kids started making fun of me, I asked my mom if I could start buying hot lunches instead. She said yes, and my American school lunch experience began. Dinners were the only Indian meals.

When my mom secured her precious golden jewelry from India around my little neck and straightened the itchy fabric of my chanya choli before handing me my plastic bucket in the shape of a pumpkin, I protested. I wanted to be Belle from “Beauty and the Beast” for Halloween. “A Disney princess, not a Desi Princess,” I told my mother with a pout on my face. The next year, we made somewhat of a compromise, and I went as Princess Jasmine.

In middle school, I grew tired of the relentless bullies who would mock me with sorry excuses for Indian accents. (Their nicknames were unoriginal… “Curry girl”? Really?). There were also the microaggressive comments from teachers and friends’ parents, who expected me to be vastly different from my white peers, and were shocked when they realized I was not. (Why is it so surprising to find out I was born and raised in Northern California). When I stepped into these predominantly white settings, I did everything I could to appear as similar to my white peers as possible. It was easier that way. All I wanted was some semblance of normalcy; the ability to just blend in even a little bit.

Now that I am in my 20s, I’ve noticed that being Desi wasn’t the only part of my identity I tried to hide, or oversimplify. In retrospect, it seems silly but I hadn’t realized at the time that the other middle school girls didn’t have to scan the room and meticulously consider all the boys in the class before deciding which one they’ll tell their friends they have a crush on. (It took me a long time to admit it, but I never like-liked that shy boy with freckles in the 7th grade, I only liked him. Singular like.)

When I eventually came out to my friends in high school, it was met with a resounding “duh…” It seems like everyone knew before I really did. (I wish they would have told me. I was confused for a long time). Having friends who were part of the LGBTQ+ community helped the fear and resentment about this secretive part of myself fade away and when my best friend and I started dating, all our friends responded by saying “finally.” Being with her felt right. The butterflies and the smiles I couldn’t hide were a testament to that. It was like things finally made sense. Our story is not one of high school sweethearts though. (How often do closeted relationships end up that way anyway?)

I might have been out to my friends, but I was more than just a queer kid. I was a queer brown kid. I was still expected to do things a certain way, and there was no room for being queer. Being an “American-born confused Desi” came to represent more than just the balancing act between American identity and Desi identity, but also that of Desi identity and queer identity. The idea of coming out to my parents, allowing their world of disillusionment to shatter with the queerness of their child still terrifies me. Despite the sense of resentment for being the token brown kid in most of my childhood experiences, I’ve spent those years carefully cultivating an image of myself: A straight, studious girl who puts God and family above all else. The kind of daughter my parents can brag about on Skype calls to India.

Having your life narrated to an audience of scrutinizing distant relatives living across the world who you have only met a handful of times is no joke. There is so much pressure to look a certain way, act a certain way, and constantly think “log kya kahenge.” I really don’t care what others think… but I also care a lot.

I am never going to be white enough for white spaces. I no longer really want to be. I’m not that little kid who hides their daal and rice during lunchtime, anymore… but at the same time, the years I spent hating my brown skin and the shape of my nose wasn’t all that long ago.

Likewise, I’m never going to be brown enough for brown spaces. I speak my mother’s mother tongue with a horrible American accent, and there is so much about India I don’t understand the way my cousins in Ahmedabad do. The feeling of shame about my cultural disconnect permeates my consciousness despite knowing that there is nothing I could have done about this to make me turn out any different. The idea of venturing further from the ideal Indian identity by coming out as queer is daunting.

Diasporic desis are expected to embody two entirely different modes of being and it’s just not possible. If we aren’t going to be brown enough for some people, and white enough for others, why are we trying so hard? Why are we buying false ideas of what is or isn’t compatible with desi identity?

I get to be a desi and an American. There is nothing confusing about it. I get to be brown, and queer. I don’t have to choose. I can’t choose. There is no incompatibility in these modes of being, despite how much we’re told that they are. It’s time to shed the unfair responsibility of cultivating and maintaining an image suitable for a million other eyes and instead, focus on the pair that stares back in the mirror. Our only obligations for authenticity are to ourselves. We don’t have to be brown enough, white enough, queer enough, straight enough, traditional enough, modern enough, smart enough, brave enough… We already are enough.

A.C.S. is a queer desi youth born and raised in Northern California. This piece is published under an alias in order to protect her identity. She, like many queer desi individuals, is not out due to safety concerns. She is passionate about sharing her story despite this because it is imperative that those who are queer and closeted feel empowered to embrace themselves even if they are not ready to declare it to the entire world yet.