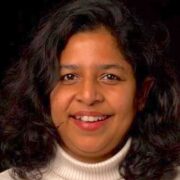 As December dawns, we often hear the politically correct greetings from everyone — “Happy Holidays”! When the whole country is adorned with Christmas trees, angels, manger, nativity set, and enchanted by Menorahs, dreidels, the aroma of latkes, as well as Kinaras and conversations around Kwanza, I always wonder about such a generalized holiday cheer.

Growing up in the southern part of India in a place called Kerala, I was surrounded by Hindus, Muslims, Christians and Jewish people. As a school student, we longed for all religious festivals because schools gave holidays to every religious festival. We enthusiastically wished our friends who celebrate their faiths and waited for special treats from their homes. There was no apprehension to wish our Muslim friends Eid Mubarak, Hindus Diwali, Jewish Happy Hanukkah and Christians Merry Christmas. On Eid, Muslim families would share their delicious mutton biriyanis, while non-Christians waited for the delicious plum cakes from Christian families during Christmas. As we relish the delightful vegetarian dishes and Indian sweets prepared by Hindus during Onam (festival of prosperity) or Diwali (festival of lights), the only Jewish friend in our grade would enlighten us about her version of festival of lights, Hanukkah.

As children, it was accepted and respected that every family will have their own faith, which did not prevent us from enjoying the goodness of other faiths. It was a common sight to see Christmas stars hung in Hindu or Muslim homes and Mother Mary or Christian Saints kept among the many Hindu Gods in the prayer rooms of Hindu homes. Nothing stopped Christians and Muslims from decorating their homes with flowers to celebrate the Hindu festival Onam. The egalitarian religious environment in which we grew up was the norm and no one paid too much of attention about being possessive of one’s own faith or imposing it on the other. It was much more fun to have diverse holidays and a variety of festivities and food based on the faith holidays spread across the calendar year.

Naturally, considering the environment in which I grew up, I was utterly confused when my American friends shared with me that they rely on the greeting “Happy Holidays” to ensure that no one’s feelings were hurt! That was news to me! Why would a specific religious or cultural greeting offend another person?

It is only when I delved more into the multiculturalism of the U.S., I came to the realization that such a progressive and dynamic cultural co-existence is primarily restricted to cosmopolitan cities like New York, San Francisco, Chicago, Atlanta and so on.  The larger part of the U.S. is more homogenous in terms of religion and culture with a good majority identifying themselves as Christians. The global perception of a multicultural, progressive and inclusive U.S. often contradicted with the belief systems held in the rural and farmlands of the U.S. The larger, yet less heard rural voices are often overshadowed by the minor, yet loud voices from the cities.

If one looks at the political affiliations of American citizens, one would observe that it aligns along the religious lines. Abortion and pro-life are big ticket issues in the U.S. politics based on the Christian beliefs held by a good majority of people in the Midwest, southern and rural belts in general. “Merry Christmas” was the popular greeting in the country for a long time, tells my friends who nostalgically remember their childhood days when they could greet each other openly with their religious greeting. However, in the past few decades, Americans preferred to be more careful about not offending anyone because the influential Jewish community celebrates Hanukkah around the same time as Christmas and so does the African community that celebrates Kwanzaa. I recently learned that Persians celebrate Shabe Yalda on the shortest day and longest night on Dec 21st as a day of forgiveness.

My apprehension here is about the logical reasoning behind establishing a norm that opted to give up all festive greetings than embracing them all!  When the country’s traditional greeting of the majority “Merry Christmas” got sidelined, such an adopted custom is not often practiced wholeheartedly, but with a tinge of bitterness that their freedom to celebrate their faith has been suppressed by so-called political correctness. My question here is why didn’t the country move towards a more celebratory option where one could celebrate one’s faith openly while embracing and reveling the diversity of other faiths alongside?

Why didn’t a more diverse, yet inclusive rationale inspire the “greeting” issue among its people in the world’s oldest democracy? Does such a cautious and restrictive norm that tried to encapsulate all religious sentiments into a singular and generalized greeting reflect a deep-rooted tendency in the country to be less accepting of culture and religions that are foreign to each other? Does it underscore the fear of celebrating the ‘otherness’ and expose the discomfort and superficiality of religious, racial and cultural coexistence? I hope my fears are exaggerated.

My five-year-old daughter insisted that we celebrate Hanukkah this year since she heard about it in her kindergarten class. So, we religiously lit the Menorah every day from Dec 10th to the 18th, fried latkes, played dreidel and even feasted on a traditional Jewish dinner. As Catholics, we will be celebrating Christmas on Dec 25th naturally. However, the newly acquired knowledge about the Persian Shabe Yalda has got us thinking about Dec 21st from now onwards. Kwanza thankfully is from Dec 26th to Jan 1st. Our winter holidays have been busy and will be. We are celebrating 4 different festivals in one month. How cool is that.

Our Christmas tree has been decorated and Baby Jesus is beautifully adorned in our manger. As the advent days are nearing towards the birth of Jesus, we try to reflect upon the good values taught by Jesus Christ. At the same time, I remind my kids to learn positive virtues from all faiths and from all people and from all beings without fear or favor. On this beautiful month of December that gives us a carousel of festivities, I would like to wish from our family to yours “Merry Christmas”!! “Happy Hanukkah”!! “Shabe Yalda Mobarak!!! “Heri za Kwanzaa”!!

If I missed any other festivities, please reach out and enlighten me and I would love to make it a part of us!!

Litcy Kurisinkal is a Research Consultant focusing on Human rights issues. Her research areas include child rights, labor rights, migrant rights, and civil and political rights. She has worked as the External Research Support for the UN Special Rapporteur on Sale of Children, Child Prostitution and Child Pornography. She has conceptualized the “Real time Crisis Tracker” and Global Mapping research project to create a visually accessible global database on commercial exploitation of children. She has worked on various research projects for the International organizations such as UNI Global on labor rights, CARAM Asia – UNDP projects on migrant laborers and Health rights, Clean Clothes Campaign, Catholic Relief Services in Benin (Africa) and Nobel Laureate Kailash Satyarthi’s Global March against Child Labor in India. She is a Public Policy graduate from Harvard Kennedy School in Harvard University and a mathematics graduate from Delhi University. She has won the Carr Center for Human Rights Policy Paper Prize in 2013.