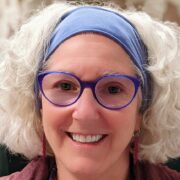 We were noticed. We were ignored. We were stared at. We were talked about. We were asked questions. We asked questions. We were welcomed. We became involved and participated. We became friends. We learned about India, its diversity, its people, its traditions, its culture, and its religions. We traveled around India. We celebrated being an Indian American family. We were two white American parents with one, then two, then three kids from Calcutta, and eventually with one through birth and one from China (which then made us an Indian-Chinese-American family). We were a transracial, transcultural family and we were unlike the majority of families that we saw every day. That was an important piece of our familial identity, one we could not and chose not to ignore.

From the day my then-husband and I decided to adopt from India, I was excited and began reading and researching everything I could about this country I’d only heard about through television and a few stories I’d read as a young girl. I had never met anyone from India, but when we decided that our first child would be from there, I started noticing every family in which the children did not look like the parents (i.e., white parents with non-white kids), and I especially was on the alert for anyone who might be from India: people with darker skin than me, women with that little dot on their forehead and wearing a lot of fabric wrapped around them like a dress, men who maybe wore a tunic top. Whether I was at the grocery store or on the university campus or at an art show, or anywhere in public, I was watching. I wanted to run up to each person I thought might be from India and ask them if they were and share with them my excitement that we were adopting a child from “their” country. But I didn’t. I stayed quiet, just observing, listening, and reading.

Honor Their Country of Birth

I especially focused on books, magazines, and newspaper articles having anything to do with India. Record albums and cassette tapes of musicians from India (mainly ragas and Ravi Shankar at first) found their way into my music collection. At that time, there were no Indian restaurants within 90 minutes of our home, and I was not even aware of Indian food, anyway. However, the orphanage staff in Calcutta did their best to educate us about the city our kids would be coming from. One of the most important pieces of advice we received from the adoption agency in Oregon and the orphanage in India was that we owed it to our children to honor their country of birth and to learn as much as we could about their country of origin. I took that to heart, but I wasn’t sure at first what else we needed to do. The orphanage staff also sent waiting adoptive parents a list of Indian names with their meanings and asked that we consider giving our children either a first or middle name from India.

After our first child, Dana Tarun, joined our family, I got busy figuring out, along with another adoptive mom whose child came the week before mine, what other things we had to start doing. Thus began an amazing journey as a mom and as a young woman, a journey that created, and continues to create, immense joy in my life.

From the time Dana Tarun arrived at 8 weeks old, we began attending events and celebrations in Portland sponsored by the India Association (90 minutes north). We hosted people in our home who were visiting from India, and I started reading any and all literature I could find that were by Indian authors, particularly novels depicting contemporary Indian life, historical fiction, and non-fiction about Indian society and history. My children’s bookshelves started filling up with children’s books mostly in Bengali and English.

When the India Student Association at the local university opened their celebrations to the public, we attended. We learned about and celebrated Diwali, Holi, Dussehra, and Janmashtami, to name a few. We watched Bollywood movies at those events, and when our daughter Rehema joined our family at age 9, she was insistent that we rent all kinds of Bollywood films from the newly opened Indian grocery and supply store in our town. That’s when I discovered that there were also movies from West Bengal, in Bengali, as well from other regions of India. I learned to cook some Indian dishes, though I found it much easier to seek out Indian restaurants whenever and wherever we could, much to our kids’ delight. Our coffee table in the living room was stacked with books of India that included amazing and beautiful photos which I — and my kids — would look at over and over, dreaming of the time when I could travel through the country myself and with my kids, a dream that has come true many times.

Our first three children came from Calcutta: Dana Tarun at 8 weeks old, Chandan at 7 years old, and Rehema at age 9. It was important to us, since our family was now a “global” family, that we honor their heritage and learn as much as we could about India and Calcutta. We became more involved with the India Student Association at the university which now often included the whole community, and with some of the events offered by the non-students who lived in our town.

My daughter had become friends with some classmates and other kids she met whose families were from India and participated in some of the events offered. When she first came to America and became obsessed with Bollywood movies, she wanted to sing and dance like the actresses. At the time, there were no Indian dance lessons in town. She did, however, love to style hair and so by the time she was in middle and high school, she was styling the hair of the girls who were performing in the shows on India Night every April.

She became good friends with several girls from Indian families, which we benefited from in that we became good friends with a few of the families as well. However, without dwelling on it too much, back in the 1980s through the mid-1990s, it was not easy to grow friendships with Indians in America. The Indians in our town were very much self-contained, and though we joined many activities, we had to work at making friends and spending time with each other’s families.

Activities and events for adoptive families, particularly for those with children from India, also offered my family a chance to be with other families like ours, and for the children to be with other kids who, like them, were part of a family in which they did not look like their parents. They were able to share their feelings and experiences with some of the other kids if they wanted to, and know that they would be understood. Along with those opportunities, our family spent a few summers traveling to Pennsylvania to a “heritage camp” for families with kids adopted from India, which was five days of learning about the different regions of India and participating in games and concerts representing their birth country. There were camp helpers from the local Indian community as well.

Over the years, it became more apparent that honoring India and the heritage my children were born into but were separated from due to international adoption was extremely important. Having Indian friends and providing racial mirrors for my children was significant, and we had to work at it.

I began traveling to India yearly, and sometimes two to four times a year, for both work and pleasure, and became friends with people from Delhi to Chennai, Kochi to Kolkata, and Kashmir to Mumbai and many places in-between and far beyond, in cities and villages. We have welcomed some of those friends to our home in Oregon over the years, and when some of our children traveled to India with us, we were warmly welcomed by those friends into their homes and their lives. As I wrote about in a previous story published by American Kahani, Rehema traveled back to India at ages 16 and 19; on her second trip back, she stayed with friends in Chennai and volunteered nearby.

It took more than just my kids and us, their parents, to dress up in kurtas, salwar kameez, and saris, wear a bindi, and eat Indian food in order to encourage a sense of pride in who they are and where they came from. While we could not “teach culture,” we could certainly provide them with opportunities to experience the culture of their first country. When we had child #4, a son by birth, we gave him an Indian Muslim middle name after a friend’s child from India who passed away just before: Jameel. Jacob Jameel participated in India Association events, even performing in a dance as the only non-Indian child one year. He attended his junior year of high school in Kodaikanal, Tamil Nadu. Our daughter from China, Dassi Chang Yan, the “baby” of the family, traveled with us to India during one trip and loved every moment of it. While she is proud of being from China, she did enjoy the times when people we met thought she was from Nagaland or Mizoram.

Willingly becoming a transracial and transcultural family demands that parents commit to educating themselves about, and demonstrating a love for, the country and culture of their children’s birth. To do anything less than that is unacceptable and does a great disservice to one’s child, in my opinion. I’m not saying that we did everything right and that there were no problems because we did make mistakes we learned from along the way over the past 39 plus years.

Yet I also believe, from the numerous conversations my children and I have had, particularly recently, that my Indian children are well-rounded adults and are proud of their heritage and from where they came, and my birth son and daughter from China are just as proud of their siblings’ Indian heritage as they are of their own. Raising a child of a different skin color than yours, and from a different country and culture, can be a wonderful experience as a parent. We parents have a responsibility to make sure we provide our children with the blessings of connection as well.

And what has adoption from India given me, in addition to my three amazing children? I think Rabindranath Tagore captures it:

Thou hast made me friends

To whom I knew not.

Thou hast given me seats in homes not my own.

Thou hast brought the distant

Near and made a brother of the stranger.

Judi Kloper lives in Oregon and is a mom to 5 kids between ages 27 and 44 years old. Her first three children were adopted from Kolkata at ages 8 weeks, 7 years old, and 9 years old between 1982 and 1987. Now retired, she had been an educator of students with learning disabilities. She also founded an adoption program for an American non-profit which placed many children with special needs from India with American families, including many NRI families.