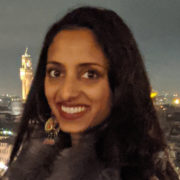 How Indian Classical Dances, Not Bollywood, Reflect Our Cultural Heritage

The sari fascinates me. That flowing, universally flattering, feminine piece of magic we desis have the fortune of calling a piece of our heritage. It is at once unifying and unique — the literal thread that binds so many South Asian cultures, and yet one that allows each cultural group to express themselves individually.

I started wearing a sari in my teens, preferring it over lehengas as it gave me far more creative license while simultaneously doubling my closet as I was able to wear my mother’s saris with, of course, no alteration needed.

I knew I loved saris, but I did not realize this fabric had wrapped itself around my soul, that it had become a part of me. Over the years, I said a few times … that I wanted a job where I could wear a sari to work everyday. I kept waiting for that filmi career, but till recently, was not ready to step into myself to become who I am meant to be.

Yes, I am an artist at my core, and yes, I am acting and modeling on the side, but it was not enough to only wear a sari part time … to feel fully myself part time. I wanted to be more ME, all day, not just after work and on the weekends, and in the sari, I feel I am the best version of myself. Maybe clothes don’t make the man, but the sari sure made me the woman.

Furthermore, this growing dissonance between working in the corporate world and being a free spirited artist was gnawing at me. So one fine day, in the last stretches of summer 2019, I decided this was it. I would take on my #sarieverydamnday challenge, and wear my sari to my “corporate” job. I must say, I work in a fairly cosmopolitan company, in a portion of the company that incorporates some startup values, including an open dress code, so I was essentially trading in my shorts for a sari at the time … but still, it felt like I was coming out of the closet and being fully me … allowing my worlds to merge, and announcing my arrival.

I am still not sure if it was the sari or the attitude the sari brought out in me, but I sure felt that New York City, those five days of the #sarieverydamnday challenge, was a kinder, more open, and brighter city than just the few days prior. People in my office who I had seen multiple times in passing felt inspired to open up to me about their own heritage and desire to wear different attire at work.

Remembering My Mataji: Watching ‘Never Have I Ever’ Rekindled Memories of My Loving Mother-in-Law

Generally, I felt people smile more, I felt myself smile more, and even my body language was more in flow and yet more in control than before. It was that paradox truthical that emerges when we are in alignment. I moved more freely in an outfit that technically restrained my movement, I felt my speech was more in flow while gaining more control, and I felt more similar to people in spite of wearing something that was completely different. In wrapping myself in a sari, I unraveled unnecessary limitations towards my connection with myself, to others, and my city at large.

So, during these “quarantimes”, I may just go back to that bit of magic and wear a sari … to once again bind myself to a certain core, a certain flow, a certain confidence found in the folds of this beautiful outfit. Maybe not every damn day, but when I feel damned, that will be the day to wear this piece of magic.

Vyjayanthi Vadrevu is a performing artist, a classically trained dancer, a writer, and a model. She had mainly studied bharatanatyam, and has recently begun her journey in Odissi and Kathak. Her writing spans from critical pieces on cultural norms in the workplace to comedic screenplays. She is also a Professor of Applied Anthropology at City University of New York, where she teaches students to solve complex, real world problems through observational methods and an anthropological lens.