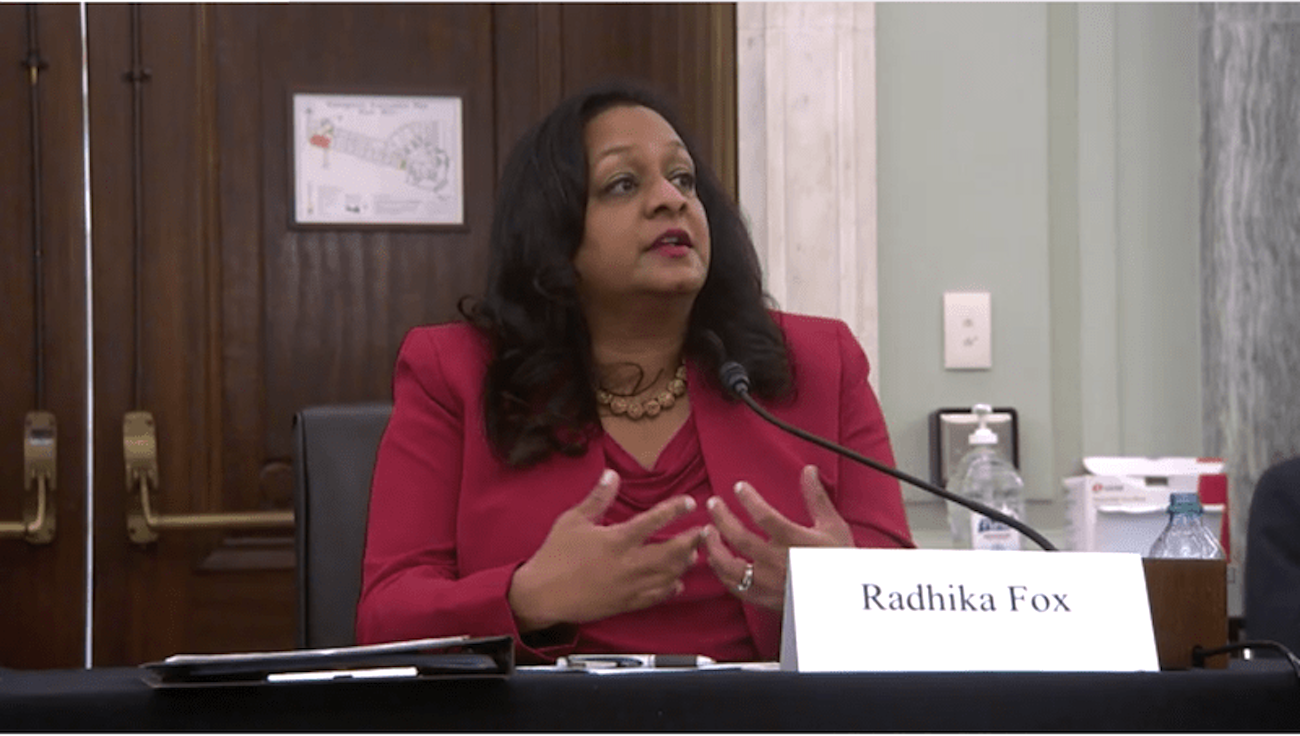 The Senate voted 55-43 on June 16 to confirm Radhika Fox as head of the Environmental Protection Agency’s (EPA) Office of Water. She becomes the first woman of color and first individual of Asian heritage to lead the EPA Office of Water, which works to ensure that drinking water is safe, wastewater is safely returned to the environment, and surface waters are properly managed and protected.

Prior to the vote, Sen. Tom Carper (D-Del.), chairman of the Senate Environment and Public Works Committee, spoke in support of confirming Fox to the office. “Ms. Fox brings with her an impressive professional record of service and accomplishments, spanning over two decades, working on water issues at the local, state and federal level,” Caper said. “We have the opportunity today to confirm a truly gifted leader and put her to work serving our country right away.”

Last month, the U.S. Senate held a hearing onFox’s nomination, where she answered questions about Waters of the United States, lead contamination, per- and polyflouralkyl substances (PFAS) and more. During her opening statement, Fox talked about her parents, who grew up in rural India. Her grandparents relied on wells for drinking water and pit latrines for managing wastewater. She said her accomplishments in her career are a direct result of her parent’s hard work, and their perspective provides the framework for her to deeply understand water’s value.

“We can’t make policy sitting behind a desk in Washington, D.C.,” Fox said. “We have to actively engage with all who are impacted by our decisions, whether it’s water utilities, farmers and ranchers, community orgs, environmental groups, states, tribes, local officials and many, many others.”

She also fielded questions regarding the Waters of the United States (WOTUS), which had initially been approved in 2015 but was rescinded in 2020. Fox iterated that a goal for the Office of Water and for EPA Administrator Michael Regan is to review and change the old rule to create one that will be more dependable and reliable for multiple administrations to come.“Water is the great uniter,” Fox said. “It can unite this country; it can help pull us out of the compounding crises that face our nation, whether it’s a global pandemic, economic recession, longstanding racial inequities and climate change.”

In January, President Joe Biden appointed Fox to the position of principal deputy assistant administrator for Water at the Environmental Protection Agency. Prior to joining EPA, Fox served as chief executive officer for the U.S. Water Alliance, where she established herself as a widely recognized national thought leader on complex water issues, from equitable water management to investing in our nation’s water infrastructure. Her work has helped address the most salient water issues facing the nation — including climate change, affordability, equity, governance, innovative finance, and the evolution of the One Water movement.

She previously directed the policy and government affairs agenda for the San Francisco Public Utilities Commission, which is responsible for providing 24/7 water, wastewater, and municipal power services to 2.6 million Bay Area residents. She also served as the Federal Policy director at PolicyLink, where she coordinated the organization’s policy agenda on a wide range of issues, including infrastructure investment, transportation, sustainable communities, economic inclusion, and workforce development.

Fox holds a B.A. from Columbia University and a Masters in City and Regional Planning from the University of California at Berkeley where she was a HUD Community Development Fellow. She lives in Bethesda, Maryland with her husband Jamie and their two kids, Anjali and Krishna.