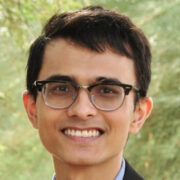 Of Churnings, Beheadings, Avatars, and the Spiraling Dynamics of the Indian Subcontinent

Two weeks ago, I checked my family’s mailbox, and hidden among advertisements and utility bills, discovered three packages, each containing U.S. passports. Thrilled, I rushed home to show my parents — we had become naturalized citizens one month prior, and had since anxiously awaited the passports’ arrival. We needed passports for the usual, customary reasons, of course, but those small, radiant books also carried a larger significance: they represented 20 years of struggle, joy, and striving, from when my parents left Rajasthan, marching towards an uncertain, but hopeful, future in America.

Almost one hundred years prior to that date, another Indian American sought citizenship for similar reasons, desiring to validate his sacrifices abandoning Punjab for a strange, foreign, and hostile land; a land he nonetheless sacrificed more for, fighting during World War I. His name was Bhagat Singh Thind. At the time, the United States only allowed “free white persons” or “persons of African nativity” to apply for citizenship, discouraging most Asian Americans from even attempting. This did not, however, discourage all: in 1922, a Japanese American named Takao Ozawa sued to gain citizenship, claiming that Japanese people were white, and thus, qualified. However, the Supreme Court then defined “white” to mean “person of Caucasian race,” defeating his attempt.

Only three months later, Bhagat Singh Thind sought to gain citizenship through a similar route, arguing, in essence, that Indian people are white. Because anthropologists defined “Caucasian” to include Indians, his case exploited the Supreme Court’s previously set definition. Note, however, that neither Ozawa, nor Thind, actually challenged the constitutionality of the law, nor the racist and exclusionary logic underpinning it. Rather, both strove to simply expand the definition of whiteness to include them, whilst keeping white supremacy intact.

In fact, Bhagat Singh Thind, in his testimony, spoke of his “revulsion” to marrying people of “lower races,” hoping to utilize his sympathy toward anti-miscegenation laws to further prove his whiteness. He even stated he was “high-caste, of full Indian blood,” demonstrating the parallels and intersections between Indian casteism and American white supremacy.

Despite this, however, the Supreme Court unanimously voted against Bhagat Singh Thind. Stating that Indians did not correspond with the “common man’s” definition of “white,” the Court decided that they could, thus, could not become citizens. For all the attempts Thind took to ally himself with whiteness, he failed—and in fact, harmed other Indian Americans, as dozens lost their citizenship following the decision. Thind’s appearance as a Sikh American, with a beard and turban, likely contributed to the court’s decision, as his assimilationist argument failed when confronted with his visual presentation as a non-white person.

Bhagat Singh Thind was a contradictory figure. He was brave, for demanding rights unfairly denied to him, but also cowardly, choosing a self-serving and unthreatening route to accomplish this. He attempted assimilating into whiteness, while still maintaining his cultural and religious identity as a Sikh person.

Unfortunately, Thind’s approach parallels many aspects of South Asian approaches to navigating race and identity in America today. Many in my community pursue “respectability politics,” attempting to align with the dominant culture, and thus, reproduce its oppressions. Growing up, I’ve personally witnessed other South Asian Americans espouse denigrating statements towards the Black community, promote themselves as “good” immigrants while portraying other groups as unworthy, and believe in myths of superiority promulgated by “model minority” narratives.

During last summer’s Black Lives Matter protests, I witnessed Indian Americans I know repeatedly discredit the urgency of addressing anti-Black racism in policing and other facets of society. We seem to have forgotten that ultimately, Bhagat Singh Thind lost —attempting to pursue inclusion within oppressive structures is necessarily misguided, wrong, and ineffectual. Instead, we must cooperate with other marginalized groups and oppose those sources of oppression themselves.

During the mid-20th century, the Civil Rights Movement sought to do exactly this. Black leaders and allies used nonviolent resistance techniques to dismantle discriminatory structures and policies, including segregation, and inspired a vision of an inclusive, harmonious, and equitable America. They advocated for the Civil Rights Act of 1964 and Voting Rights Act of 1965, expanding human rights protections for all minority groups through legislation.

The Civil Rights Movement also shaped what South Asian America looks like today. In pursuit of eliminating racial quotas in immigration, Civil Rights leaders successfully advocated for the Immigration and Nationality Act of 1965, which shifted the U.S. immigration system towards skill-based and family-based visas. Immigration from India, Pakistan, Bangladesh, and other South Asian countries skyrocketed over the following decades, and allowed our communities to make dynamic and transformative contributions to American society.

Without the Immigration and Naturalization Act, and without the Civil Rights Movement, my parents would likely never be here. In the beginning of this essay, I stated that obtaining our passports took 20 years. I was mistaken—it actually took dozens more, because that ability was contingent on the work of Black organizers and allies generations prior, who helped uplift other communities in pursuit of universal equality and justice. Many South Asian leaders supported the Civil Rights Movement—including B.R. Ambedkar, who wrote to W. E. B. Du Bois, identifying similarities between the anti-caste movement in India and the struggle for Black liberation in America.

The effects of the Civil Rights Movement continue to reverberate through and benefit the South Asian American community today. Its successes demonstrate the efficacy of inter-community cooperation and a united front against injustice, as opposed to respectability politics, which promotes division and assimilation into oppressive structures rather than meaningful change.

Today, in the face of police brutality, systemic racism, and growing bigotry, we, as South Asian Americans, should remember the legacies of the Civil Rights Movement and the necessity of standing for justice, no matter who is suffering it. Our struggles are interrelated—as history demonstrates, denigrating other marginalized groups to avoid our own marginalization is not only morally abhorrent, but completely ineffective. The path towards an inclusive, equal, and just society lies in solidarity against oppression, wherever it is found.

Suhan Kacholia is a high school senior from Chandler, Arizona. He possesses a background in political advocacy and organizing, especially for Arizona’s Asian American community. Suhan’s essay won first place in the high school category at an arts and essay contest organized by Hindus for Human Rights and the Indian American Muslim Council.