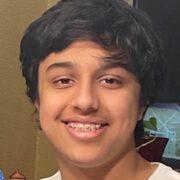 Move Over Kamala Harris. Superhero Kamala Khan is Coming to a Theater Near You

I’m Dani, a teen living in North Texas. Politics have been a big part of my life from when I was little — wearing my “Hope” T-shirts to telling my friends about how Hillary Clinton would make a great president — to now. I’ve been following the 2020 election very closely because this election represents a feeling in my life that I’ve never felt before: actual fear of the future.

I’m scared because I don’t think I can imagine another four years of the current America. I look around and I see a country that I don’t recognize. I see a country where people are frightened to even enter their local grocery store because of the looming threat of the mishandled virus. A country where educators are scared to reopen because an outbreak among students would overwhelm a struggling health care system. And to add insult to injury, our President wants to pretend like the pandemic is over by ignoring science and irresponsibly speaking in front of big, untested crowds.

I see a country with a once strong economy in steep decline. Our GDP is going down at a historical rate. Unemployment is rising fast, many of these jobs being permanently lost. Our famous American consumerism is at a low as well. Sadly, our President would rather pretend that the economy is like it was before, rather than have a coherent plan to bring back the economy.

I see a country in disarray with a President that cannot adequately respond to the pain that so many African Americans are feeling due to police brutality. Then I go online and I see friends of mine laughing at and misrepresenting a modern-day civil rights movement because the politicians and media they choose to follow are doing the same. It feels like these past 4 years have made us forget the teachings of the past 60 years of great Civil-rights leaders.

Dani Ahmed is a 15-year-old high school student in North Texas. He is interested in politics and passionately believes in the importance of youth participation in the electoral process and civic engagement. He is an avid gamer and enjoys going to the movies.