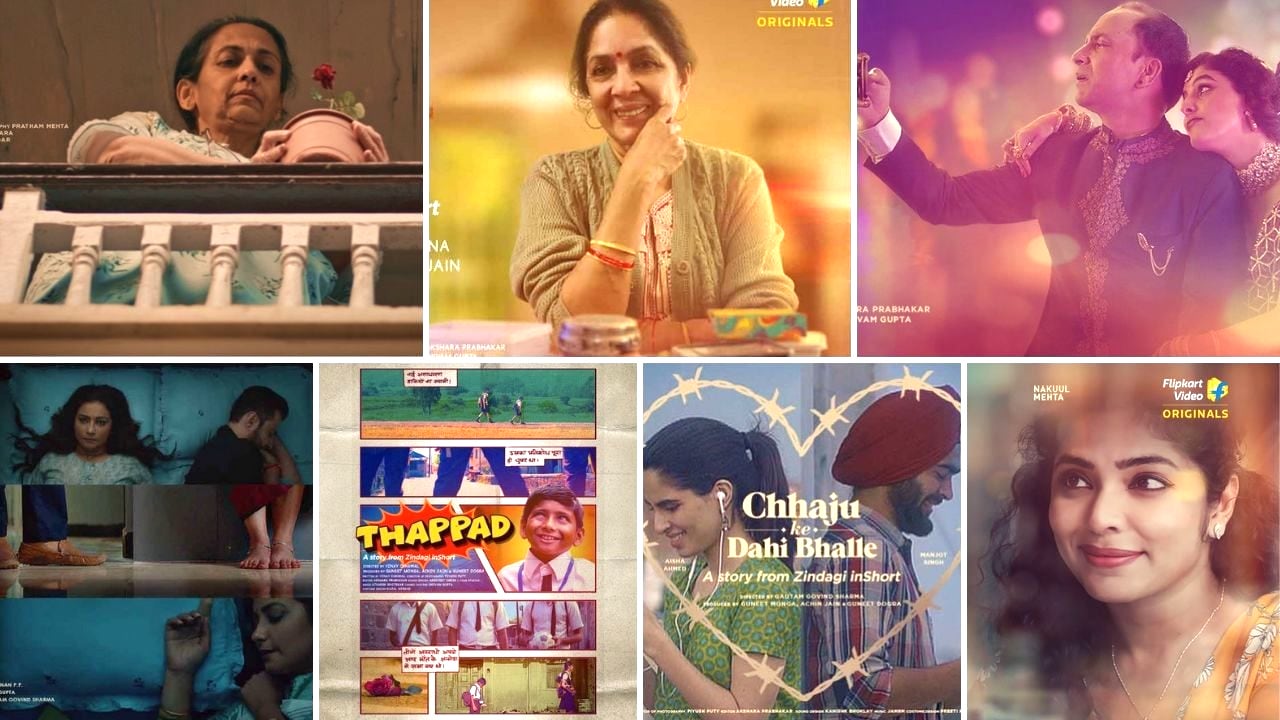 Rarely, does a film make you smile, laugh, cry and make you think, all within its 120 mins. But Academy Award winner Indian film producer Guneet Monga (“Gangs of Wasseypur,” “The Lunchbox,” “Masaan”) does just that with her seven slice-of-life short films entitled “Zindagi in Short,” which I promise, will have you grinning from ear-to-ear, and wishing for just a little more, at the end.

One can’t arrange these marvels in any order but “Thappad” is my clear favorite. Directed by Vinay Chhawaal, this film centers around a brother-sister duo in a distant village, strangely reminiscent of the “Wild Wild West.” The two being the only characters, we see. But the brilliance with which it has been shot on just an iPhone with the bundle of talent that is young actor Shafin Patel (“Skater Girl”) with his signature killer smile, comes across as an empowering statement against bullying. Bablu becomes the hero from his comic books to save his sister from roadside Romeos. Interestingly, we only see Bablu’s face on the screen, while the other characters are just arms and legs…a clever way to focus on the tiny protagonist’s perspective.

True to its title, “Thappad” will echo for hours in your mind as a brother stands up for his big sister by doing the unthinkable – letting him slap her so hard he falls to the ground. With barely a word spoken in the film, slow motion and a frame in which the maker focuses on the act of bullying rather than the bullies, the storyteller conveys the point – power doesn’t bring about a change, it’s the courage to stand up against injustice that does. We don’t know how strong we are until being strong is the only option. And nothing explains it better than “Thappad.”

Another short story featuring the uber talented Divya Dutta as an ill-treated housewife in “Sleeping Partner,” brings home the message of domestic violence and marital rape, which  are discussed with sensitivity and seriousness. Directed by Punarvasu Naik, Beena (Dutta) is married to Sahay (Sanjay Kapoor). She is in a marriage where domestic violence and marital rape are the order of the day. The way he treats her and the words he uses to address her or talk about her, clearly state that the man doesn’t have any love, respect or concern for his wife. If Beena is hurt, she never expresses it, and Sahay never sees or acknowledges her pain.

Things change when Ravish (Jitin Gulati), her husband’s business partner, comes into their lives. On a steamy afternoon, Ravish makes advances towards Beena and while she resists at first, her heart, parched of love and affection, gives in eventually. She feels desired again, valued again and that gives her wings to finally be able to take flight and break away from her situation.

This hard-hitting tale centers on a woman’s test of tolerance until she can’t take it anymore, shows her killing two birds with one stone. And it’s enough to leave you impressed not just with Dutta’s character but also how a woman can find courage inside herself, when her back is pushed to the wall. This short film will fill your heart with hope and is a testament to the immense himmat (courage), that you need to change your situation. It is a must watch for every woman out there, who is suffering in silence while those around her stay oblivious of her angst and agony. Dutta’s eventual metamorphosis from victim to survivor, will make you want to stand up and clap.

Another story that bears mention is “Pinni,”  in which Neena Gupta is in splendid form as a neglected matriarch whose skills at making ladoos are all she is recognized for by her near and dear ones, reduced to a sweet-making machine for her ungrateful daughter, husband and relatives, until the moment of awakening bursts forth, like a kitchen stove suddenly turned on high. Director Tahira Kashyap shoots most of the story on a slow-burn flame letting her actress lead the way till the startling, and unexpected climax. If you can’t stop praising Ayushmann Khurrana’s talent on screen, check out how his wife Tahira Kashayp is the master of the camera as she gives a sugar rush with her “Pinni.” This is definitely one of my favorite stories of this anthology.

Among these heartwarming tales is “Sunny Side Upar” which reminds us of what we should never forget – life is to be lived before it’s over. Just like its name, it shakes up the cozy urban youth whose most committed relationship is with their Netflix account. Directed by Vijayeta Kumar and set in a cancer hospital, this short film tries too hard to be buoyant and upbeat. The dialogues sound like commercials for holiday tours and the performances including the central one by Rima Kallingal are way too stilted and scripted. This one is almost like a get-well-soon card in a short-film format.

Another disappointing film in this anthology is “Nano So Phobia,” where Swaroop Sampat stars as a dementia-afflicted Parsi woman in the Rakesh Sain directed venture. Not her fault entirely. The writing is clunky and that Parsi accent is worse than Farah Khan’s accent in “Shirin Farhad Ki Toh Nikal Padi.” The story tries to say something about the abandoned elderly, but the message is largely lost in slipshod direction.

“Chajju Ki Dahi Bhalla” directed by Gautam Govind Sharma does to online dating what “The Girl On The Train” does to alcoholism. There is little charm or tenderness in the online romance though the sights and sounds of Amritsar are captured with some tinder (pun intended) affection. Manjot Singh as the Sikh boy with a new found passion for online dating and Aisha Ahmed as the Pakistani girl with a new smartphone and online boyfriend try hard to look excited, speaking to one another with Singh even doing a little bhangra jig to convince us viewers. Sorry, we were not convinced.

“Swaaha,” directed by Smrutika Panigrahi, featuring the ever-dependable Deepak Dobriyal (“Hindi Medium,” “Omkara,” “Tanu Weds Manu”) as a suspicious husband tailing his pretty wife (Isha Talwar) at his brother’s wedding, accusing her of having an affair is the worst story of the bunch. It aims to be brutal and amusing. It is neither. Just plain annoying in a very Anurag Kashyap kind of way. However, even though one never doubts Dobriyal’s comic timing or his rustic persona, even Talwar shows untapped potential which deserves mention.

This anthology of seven short stories, a majority of them with female protagonists, standing at a decisive moment in their personal history, is never short of breath, although some of the stories could have done with more thought and less action. Nonetheless, “Zindagi in Short,” playing onNetflix is worth a dekho, if for no other reason than to see how far the short-film genre has come in Indian cinema.