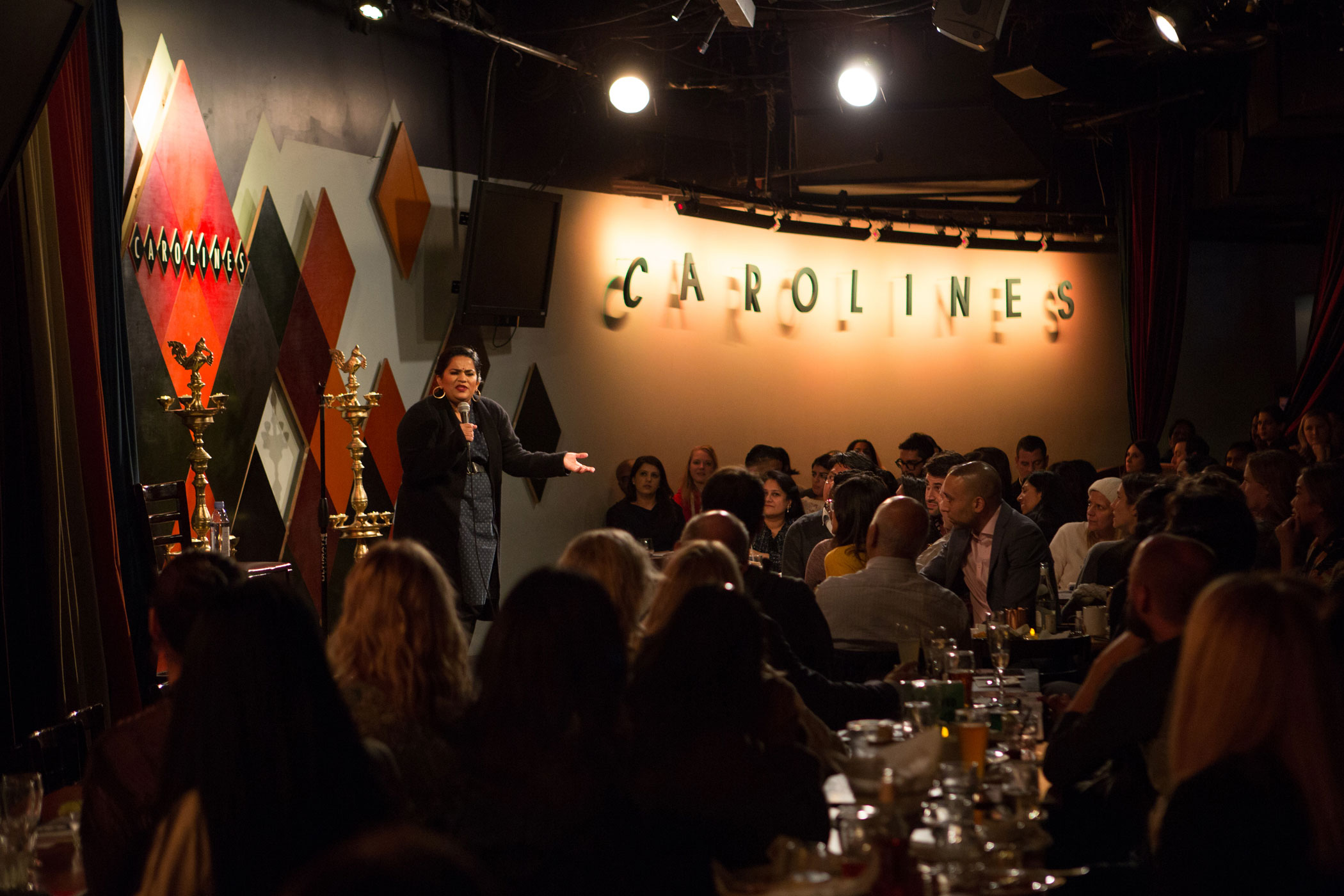 I’m a stand-up comedian. A performer who needs an audience that I can look in the eye.

Covid-19 has blown open the world for me. Let me explain.

Until March, I was walking a pretty established path, working the NYC comedy clubs, producing my own shows, applying for festivals — tried and tested ways of succeeding as a stand-up comedian. On top of my comedy work, I was also starting a career as a screenwriter. My first script had just been optioned by Sanjay Sharma of Marginal Mediaworks and Milan Chakraborty of Attic Light Films. I couldn’t believe I had found two amazing Indian movie producers in Hollywood who believed in my story and supported me.

But when Covid hit, I watched all my live shows get cancelled one by one. My heart sank deeper and deeper with each email and phone call. In turn, I had to call my team to cancel their bookings: camera people, sound technicians, makeup artists, photographers and more.  My only saving grace was that I was healthy, even though I was so anxious that I thought I was going to have a heart attack. Today, the future of comedy clubs packed with people remains in suspense. And with it, the future of traditional stand-up comedy.

All my audience members were locked in their homes — but needed to laugh now more than ever. I was flooded with messages about how badly people needed to laugh and I read each one with anger and frustration. As I worked in my tiny, restricted space in Manhattan which I share with 4 other people, my mind started flying in every direction you could think of.

I started to imagine…

What if I booked a Zoom room, invited 20 first responders and did a show just for them?

I had seen an Indian musician in Australia doing very cool stuff — could I possibly collaborate with her?

What if I offered a group of senior citizens in India a chance to gather around their Zoom screens while I coordinated a comedy show peppered with Bollywood trivia?

I started staying up late nights, learning the ins and outs of different online communication options. Once I found one that I liked (Zoom, no surprise), I played with the idea of creating a small, personal show with my friends, just to see how it went.

Normally I prepare for a show by writing out my set again and again, practicing it on family members; then hair, make up, outfit; then I walk out on stage and connect with my audience — face to face. Each step more and more nerve-wracking, and yet the nerves themselves propel the performance. Could I do it all again online?

A different kind of nerves took over, along with a new determination.

In a little group of 10 people, we had the best time. We laughed. We cheered each other on. My audience was very forgiving and really just wanted to laugh — the early technical glitches became part of the act, time delays encouraged people to make funny frozen faces, and sometimes people got so silly, that their goofiness became my new punchline! We experienced an evening of friendship more exhilarating and hilarious than I could ever have expected, especially as we could feel the grim reality surrounding us.

I felt like a fire had been lit under me. Live online comedy was a whole new world to explore–not a replacement but a complement to the world of live comedy I had happily roamed before.

I soon found myself booking online shows across the country, then across the world. Once I removed time zone considerations from my own mind, I imagined shows happening everywhere! Elite private events I hadn’t dreamed of — prestigious colleges in California! — started booking me. I was able to contribute my online services to first responders and patients in hospitals. Can you imagine my gratitude for Zoom? I found a closeness and connection I didn’t know was possible in my online shows booked by old and new fans in India.

And as far as my movie screenplay, Rearranged,’ since all the movie productions have now been shut down, my screenplay is getting a closer look at major studios. Studio executives have time to read again! Team Rearranged is moving forward with putting all the pieces together so we can create some happy, Indian-inspired movie magic for our audience soon.

Even before the Covid outbreak, live online entertainment was a looming future reality all performers were going to have to grapple with. Now we all must take this step online immediately for our careers to survive. Yes, it’s intimidating. But it has a whole new range of rewards that can be just as fulfilling — and sometimes more so — than a performance in person. There are many lessons to be learned during this crisis and I’m keeping an open heart and mind so I can receive them all.

Zarna Garg is an award-winning stand-up comedian and screenwriter, and headlines a monthly show at New York City’s Caroline’s on Broadway called “My American Dream.” Zarna has produced and performed in multiple sold-out comedy shows in top comedy clubs across NYC, including the groundbreaking HinJews shows. She has expanded into online comedy shows across multiple time zones.

Her comedy screenplay ‘Rearranged’ won the Best Comedy Screenplay Award (placing #1 out of 11,000 scripts) at the Austin Film Festival, and was also a 2019 Academy Nicholl Fellowships Semi-Finalist. The script was optioned by Marginal Mediaworks.

She has received numerous community accolades for pioneering one-of-a-kind works as an Indian mom of three and former lawyer turned comedian.

Her comedy uniquely combines the immigrant and American experience. She is one of a handful of female Indian comedians worldwide, and possibly the only one who publicly takes on her mother-in-law.