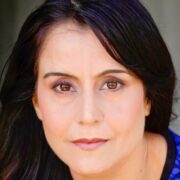 I have been a SAG-AFTRA actor in the American film market for over a decade and always longed for scripts that would give me a chance to showcase my range as an actor. I took pride in my pre-work that began with reading the script numerous times, then letting the character’s voice take shape beyond the written word, then adding a detailed backstory based on the weight of my own experiences, and finally performing the role with a deeper need to belong to, or refute, the character’s given circumstances. Sadly, I seldom had the opportunity to do any of this and was restricted to perfunctory day player roles thrown in to enhance the diversity quotient of a project.

My connection to the diversity quotient is that I grew up in India and came to the U.S. in the 1990s to pursue higher education. After stints in banking, motherhood and the tech sector, which made me, both, an east coaster and a west coaster, I settled into the not-so-comfortable and often-misunderstood world of the creative arts, in the Bay Area. I tried my hands at the theatre and tested the imagination of directors accustomed to a certain type of actor to fit all roles written for American theatre. I was fortunate to find the adventurous ones who cast me against my “type” and I got to etch some memorable roles including a suicidal Parisienne, a car-bomb survivor and even a pious nightingale. To expand the reach of my acting capabilities, I turned to film and was cast in a Bollywood film shooting in San Francisco.

While this opened doors for me in film, the type of roles being offered quickly shrank to irksome stereotypes of my ethnicity and gender, making the roles as alien to me as I was to the industry. I recognized that these characters were often being created by those who had neither walked the walk, nor talked the talk, and yet were somehow influential enough to let their understanding of me and people like me become the overarching narrative for us in the industry.

Through all this time, I neither felt disheartened, nor did I ever consider giving up. I knew that it was just a matter of time before I too would get a chance to etch characters meaningful to my experiences and tell their stories in relatable and poetic ways, emphasizing the female gaze in my exploration of the feminine. I began to test my female-forward scripts in national screenwriting contests and the response, to my utter surprise, was overwhelmingly positive.

While becoming a writer with some meaningful placements was relatively easy, becoming a screenwriter with any backing from the industry was, and continues to be a treacherous path! I am yet to find the right pathway for my bent of immigrant stories, steeped in authentic portrayals and marked by narratives of importance to the collective voice of our diaspora.

Earlier this year, I was invited to join the Women of Color Filmmakers Lab to be mentored through the process of making a film, from script to showcase. To say that this was the most gratifying experience of my life would somehow trivialize all my other forays into finding my voice, so I will just state that this was a truly cherished experience in my creative journey. If the lab gave me the power to execute on my dream of turning words into moving imagery, it was my cohort of ten accomplished women that ably guided me through some tumultuous times, an intrinsic part of any filmmaking journey.

The lab took place over a period of six months and the theme for our scripts this year was “the infinite.” I interpreted it to mean “endless,” and connected it to my effort to shed light on the endless limitations set upon a woman’s choices within patriarchy, which in itself has had an impact on endless generations.

I wrote the screenplay for “Stain Resistant,” pulling from a story I had been researching and developing for a few years. The story revolves around the issue of suppressed trauma and the need for women from the South Asian diaspora to break their silence, reclaim their choices and choose self-preservation over self-sacrifice. In one of the writing exercises with a lab mentor, I wrote a scene filled with nostalgia for simpler days of youthful musings, and this became the opening voiceover in my film.

Our final scripts were due within four weeks of the start of the lab, and that was both intimidating and exhilarating, having had the opportunity to refine our scripts under the guidance of experienced screenwriters and mentors. As we started to assemble our pre-production teams and budgets, the lab held weekly sessions to educate us on how to shoot within a low budget. We also evaluated various crowd-funding options and I was fortunate to receive a couple of grants, fiscal sponsorship and the support of friends and family to meet my funding goals.

On the directing front, I was required to define and refine my cinematic perspective. Artistically, I’ve been inspired by directors like Mira Nair and Deepa Mehta whose portrayal of the feminine is, both, delicate and hurt; restrained by society, yet screaming to break free. My exploration of the female mind strives for a similar balance between social constructs and independent thought, while also provoking reflection through artwork and ornamentations placed in a frame.

In keeping with the theme of the lab, I looked toward reflective surfaces to underscore the endlessness of specific concepts. I opted for mirrors in key shots, to not only showcase the inner turmoil within a character’s journey but also to magnify the multitudes my characters carried within them, as products of multiple cultures and value systems. The lab helped me identify and articulate my distinct voice which presents itself as a gentle revelation of egregious occurrences, amplified by the impact on my characters’ choices and portrayed through poetry, metaphor, and cultural nuances.

With a clear vision for the film and detailed preparation to back it up, I shot my script over two schedules, three days and four different locations. In this process, I most enjoyed being able to provide opportunities to several other people of color, a majority of whom were women.

After a lifetime of memories made at the lab showcase at a beautiful outdoor setting in Pasadena, I walked away from the experience richer in learning, camaraderie and the belief that women filmmakers can pack a punch in their storytelling when given a chance. For women of color, while there still is no clear path forward, it is entirely up to us to lay down the bricks, pour the cement and leave our colorful footprints on our newly minted pathways.

Shruti Tewari is an Indian American screenwriter, director and actor from the Bay Area. After appearing in over two dozen projects ranging from a Bollywood blockbuster to award-winning independent films, she took to writing stories about immigrant experiences. Her scripts have been placed at numerous screenwriting competitions including the Austin Film Festival, WeScreenplay Diverse Voices Lab and Big Apple Film Festival. A recipient of the Silver Remi Award from WorldFest Houston, her short films continue to garner laurels worldwide. Her latest foray into filmmaking “Stain Resistant,” is a female-forward film about overcoming suppressed trauma. She was awarded a Certificate of Honor by the City and County of San Francisco for making a positive impact through the arts, in mentoring at-risk youth.