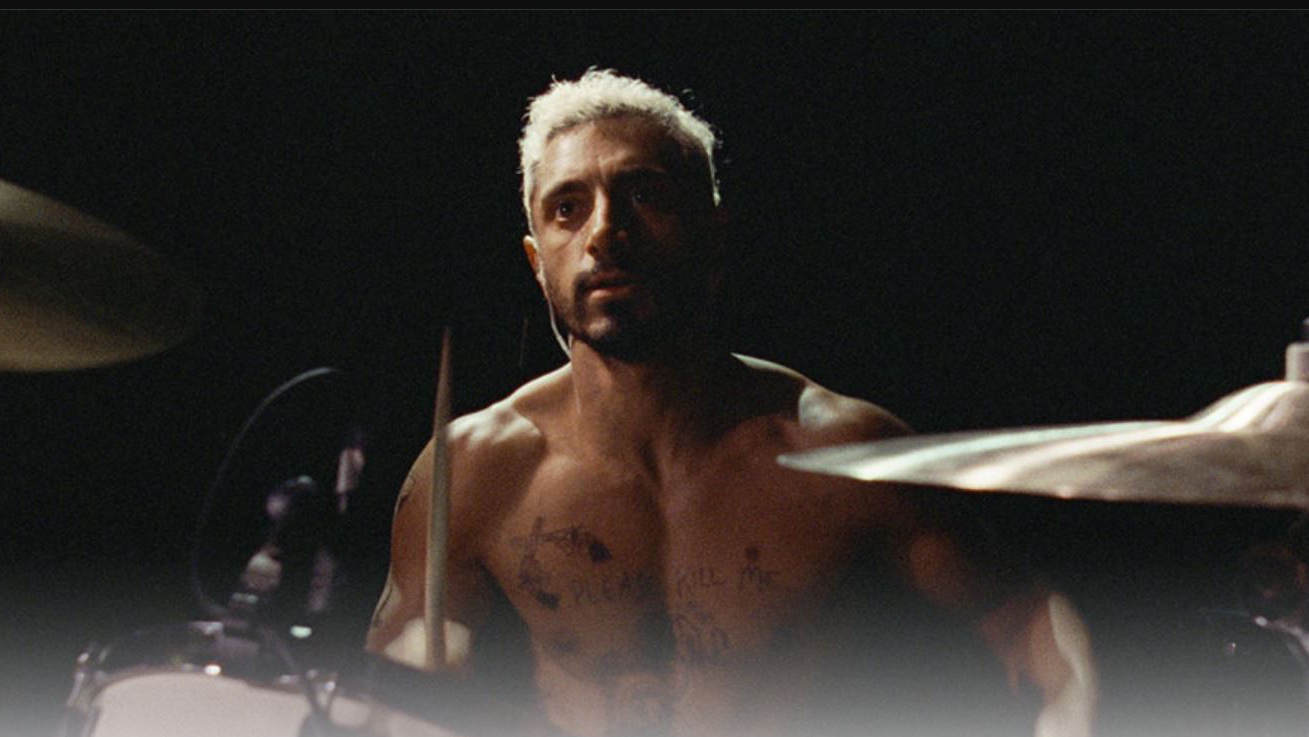 For a movie about a heavy metal drummer, “Sound of Metal” (Amazon Prime), Darius Marder’s directorial debut, revels in the silence.

A very ripped, tattooed and blonde Riz Ahmed (‘Night Crawler’, ‘Jason Bourne’ ‘Una’ etc.) gives an extraordinary performance as Ruben, a punk-metal-experimental drummer and recovering heroin addict who is forced to come face to face with hearing loss and his acceptance of it.

Ruben, drummer of the noisy duo named Blackgammon, lives in an RV with his girlfriend Lou (Olivia Cooke, “Ready Player One”), and the two form a touring band of some reputable esteem if not lucrative record contracts. One day, Ruben wakes up to his hearing suddenly, abruptly disappearing. It comes on suddenly — the sound drops out from his surroundings, and voices become muffled. Ruben reaches for his ears, his eyes dart around, and we see abject terror on his face. And just like that, we are completely locked into this man’s gathering existential panic. Ahmed makes the moment, and the next moment, and the moment after that, about more than just hearing loss as we go on this journey of self-discovery with him,

A doctor informs him he won’t regain his hearing, although an expensive cochlear implant surgery is an option. Deeply shaken and worried about the status of his four-year sobriety from heroin, Ruben travels to a facility recommended by his manager, one that’s part of a larger deaf community.

The rehab is run by a pony tailed Vietnam vet Joe (Paul Raci), a recovering alcoholic, who lost his hearing when a bomb exploded near him and whose greatest challenge is getting Ruben to embrace the idea of his new burgeoning deafness, in both the audible sense and the spiritual. Ruben begins to settle into the community — learning American Sign Language, making new friends, and trying to absorb the lessons that Joe teaches — but the draw of Lou and the life he left behind lead him to some difficult choices.

Most of the film follows Ruben’s winding path from wounded, temperamental dynamo raging against his predicament to a person learning to accept and appreciate his new life.

The film feels authentic; most of the excellent supporting cast are deaf themselves. With a stellar supporting cast, an actor like Ahmed comes to the fore — becomes invaluable doing what he does best – emote. When a film’s drama has to be conveyed through images and sounds and not so much through dialogue, one needs a star, like Ahmed, who can communicate so effortlessly through his movements, his glances, even his very posture, without so much as uttering a word.

To bring out the authenticity of the role, Ahmed spent six months learning how to play drums and sign using ASL. He even bleached his hair blond for the role. And his hard work shows, in his touching and credible performance.

One of the best features of “Sound of Metal” is its refusal to indulge in any tired triumph-of-the-human-spirit clichés that so often weigh down disability movies. It conveys Ruben’s despair without sensationalizing it.

Worth mentioning is the intricate sound design by Nicholas Becker (“Gravity”) and his team, which take us inside Ruben’s head to capture the distortions and the silences he experiences as his hearing starts to fade. You almost feel what it would be like to be Ruben.

Of course, this is a film in which most of the spoken dialogue is close-captioned while none of the ASL conversation is, leaving the audience a tad bit disoriented, like Ruben, for so much of the film.

Written from a story by Derek Cianfrance (“Blue Valentine,” “The Place Beyond The Pines”), “Sound of Metal” took 13 years to make, and is dedicated to Marder’s grandmother. “My grandmother Dorothy Marder was a gay photographer and activist. She went profoundly deaf after taking an antibiotic. The loss of cinema was particularly devastating for her. She petitioned for open captions for the rest of her life. #SoundOfMetal is dedicated to her,” he tweeted.

This unusual, yet poignant, surprise of a movie is a definite must watch.