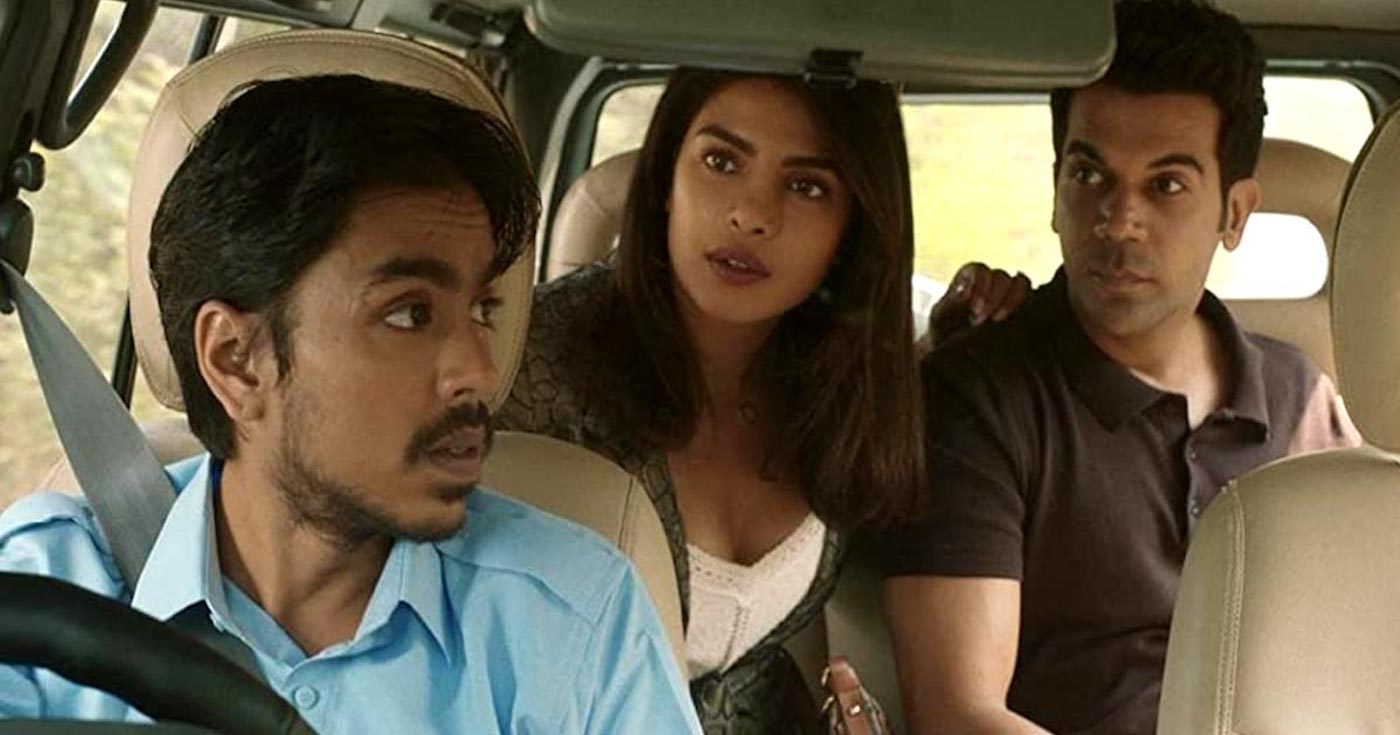 Centered around the story of a poor but wily driver who claws his way out of the “rooster cage” created by caste and servitude to become a success story in the new India, is neither subtle in approach nor lost in significance for the audience.

“White Tiger” tells the story of Balram’s (Adarsh Gourav) as he drags himself out of poverty and the shackles of caste to become a successful entrepreneur. Narrated by Balram in the form of a letter to the visiting Chinese Premiere, Wen Jiabao, “The White Tiger” details Balram’s wretched life of poverty in a village close to Dhanbad.

Master Balram Halwai lives in the village of Laxmangarh, with his father, brother and family matriarch – his grandmother. A very generous education officer, seeing his potential, picks him for a better shot at life and learning in the capital city of Delhi. That is, until, his rickshaw-pulling, debt-riddled father contracts tuberculosis and doesn’t make it. The kid’s egomaniacal and money-grubbing grandmother –Kusum ji– pulls him out of school, despite being a bright student, to work at the nearby tea shop to pay off the debt. His older brother had already been roped into servitude by granny dearest.

When the father was alive, he was tied to servitude to a ruthless feudal lord with old money from digging the coal mines of Dhanbad – nicknamed The Stork (Mahesh V. Manjrekar) and his goon of a son – The Mongoose (Vijay Maurya) – who would extract every penny out of the starving, overworked, daily laborers who were drowning in a mountain of debt to the man.

Even at a tender age, Balram is simmering with rage and resents the stay-faithful-to-your-master-till-death mentality, that he terms the “rooster coop.”  It stands for a state of being where generations of downtrodden people were brainwashed into believing that they, at all costs, must serve and surrender to their feudal masters.

But Balram is wily, a rebel in this downtrodden family. With a burning fire to get out of his hell-hole of a life, he begs his granny for Rs. 300 to learn driving, with the promise of returning all of it and then some. But the greedy, money-grubbing old lady won’t budge; the master manipulator in Balram then baits her by promising to send all of his salary to the family at the end of every month and that does the trick. Balram soon find himself off to the big city of Dhanbad – where his fortunes await.

The Stork’s younger, Amrica-vapis beta, Ashok (Rajkummar Rao) and his inter-faith wife, chiropractor-practicing Pinky madam (Priyanka Chopra Jonas), replete with fake accents, are back in town and are looking for a second driver for their car.

The real story begins when the less fortunate meets the uber fortunate and how the clash of the two worlds gives birth to a white tiger – a rare breed, believed to be born once in every generation, a beautiful and majestic beast, but visibly perturbed and restless in a tight enclosure that barely seems capable of containing it (we are afforded a glimpse late into the film).

Suddenly, a guy who has never heard the word “computer” goes from eating outside on the gravelly ground to spending his days in a luxury residential hotel in Delhi, even though the help still had to sleep in makeshift shelters, replete with dengue and malaria-causing mosquitos in the belly of the parking garage. His shimmering new life gives him the tools to get ahead — and I’m not talking résumés and references, but good, old-fashioned chalaki (street smarts). Balram, argues that being intelligent and ambitious, isn’t enough for a poor man to rise above his station. Deception, theft, bribery and even murder must be included in any rising entrepreneur’s toolkit.

And when betrayed by his employers, his ingratiating smiles freeze and generations-worth of pent-up anger and frustration erupt in a chilling climax, we are left at the edge of our seats.

Adarsh Gourav (known for “My Name is Khan,” “Leila” and “Mom”) wasn’t a household name when this movie was announced but, we guess that’s all about to change. The actor has an eye for detail and it shows through acing that colloquial
North Indian accent, mannerisms of a troubled persona of a man who was once innocent and immune to the darkness of the world, but is now swallowed by hate and desire for revenge. Gourav effortlessly switches from sweet to deranged, gullible to the Machiavellian, generous to bloodthirsty, peeling back the layers of his character with such ease, that the audience truly begins to see him as Balram.

Adarsh, who embodies Balram with sincerity and turns in a superlative performance as the wily antihero, is clearly the highlight of this Dickensian rags-to-riches story.

Bahrani’s film admirably embraces the book’s upper caste take on caste, but avoids autor Adiga’s scathing depiction that reveals the hero’s disdain for Hinduism, especially his use of a beloved Hindu deity to explain subservience in India. Bahrani, in a post-2014 India governed by the far right, and in light of recent controversies that have dogged Indian movies, spearheaded by the Hindutva regime in India, steers clear of being critical of the majority religion.

Bahrani has a deft, light hand at the helm, even while ruthlessly laying bare the many hypocrisies that make up modern India from the outright brutality of Ashok’s father and constantly cussing and slapping older brother to the well-meaning but ineffectual kindnesses of Ashok and his wife, Pinky.

Adiga’s book projected men as the primary victims of poverty, exploited not just by their rich employers but also by their vulture-like female relatives. While there is some truth in the depiction of men in poor families suffering greatly to marry off their sisters, the book failed to acknowledge that this is a burden placed on them by patriarchy and that women are the greatest sufferers in a caste-ridden patriarchal set-up. Adiga made it worse by not writing a single woman with substance into the book.

Bahrani’s screenplay deviates from the book, expanding on Pinky’s sketchy characterization and brief presence in the novel, turning her into one of the story’s primary characters, and transforms her from the largely inconsiderate creature she is in the book to the most sensitive person in Ashok’s family.

The rewriting of Pinky is one of the nicest things about the movie.

Chopra Jonas, who also happens to be one of the film’s executive producers returns a powerhouse performance. The Bollywood star-turned-global icon perfectly captures the internal conflicts of this spirited woman who is horrified by the regressive attitudes she sees all around her and mortified by her own part in the mistreatment of Balram.

Rajkummar Rao’s performance is dismal at best, barely passing muster with his over-the-top American accent. Rao’s characterization as a heartbroken drunk, after his wife leaves, is a huge letdown, with Gourav running circles around him in joint scenes.

The supporting cast are uniformly solid, though none quite as good as Kamlesh Gill who completely erases her natural charm, exemplified by her performance in 2012’s “Vicky Donor,” to play Balram’s nasty grandmother.

Bahrani’s shrewd instincts as a master storyteller serves him well here. His reluctance to sensationalize Balram’s poverty, or turn India into flashy, exotic, Western view of India — which many movies (“Slumdog Millionaire”) in that genre unfortunately fall prey to. Coupled with his stellar camerawork, matter-of-fact characters and pulsating musical scores by Danny Bensi and Saunder Jurriaans, “White Tiger” is an engrossing and entertaining fare from start to finish.

For a film dealing with heavy-duty themes of corruption, caste, globalization and entrepreneurship, “The White Tiger” is gripping and fast paced. The cast and script, with pearls such as “Do we loathe our masters behind a facade of love, or do we love them behind a facade of loathing?” are though provoking and excellent.

In “White Tiger,” lessons are learned and relearned about India’s class system, presenting a searing look at the caste system that has recently become the subject of choice. The is a must watch dark thriller-like satire of upward mobility.

‘White Tiger’ is streaming on Netflix.