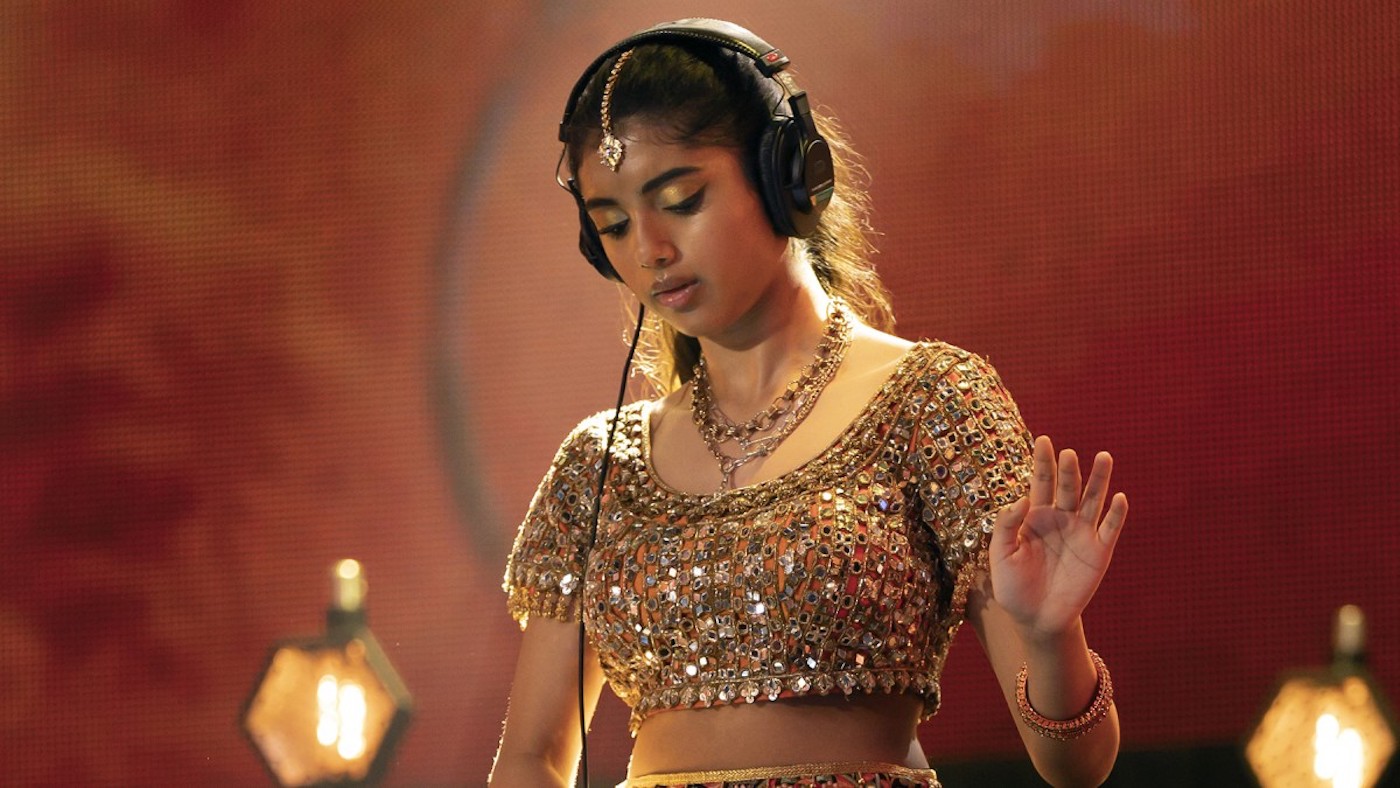 Growing up in the U.S., Avantika Vandanapu is familiar with the challenges Indian American kids face — navigating through family, their dual identity, maintaining good grades, as well as pursuing their dreams, their passions. And it is this awareness that the 16-year-old actress brings to Rhea Kumar, the character she plays in “Spin,” a Disney Channel original film.

Directed by Manjari Makijany, “Spin” follows 15-year-old Rhea, who lives with her tight-knit multigenerational family. Her life revolves around her family’s restaurant, her eclectic group of friends, and her after-school coding club. But, everything changes when she falls for aspiring DJ Max, and a long-lost passion for music, which came from her mother, is reignited. “Rhea discovers that she has a natural gift for creating beats and producing music that blends her Indian heritage but must find the courage to follow her true inner talent,” per the film’s synopsis.

“The film covers the journey of her coming into her own, gaining confidence in herself and learning how to navigate all these different obstacles that are coming in her way,” says Avantika (who goes professionally by just her first name).

And just like its diverse cast, with mostly Indian American actors and an established Abhay Deol from Bollywood, “Spin” is breaking barriers by being the first Disney movie to focus on an Indian American family. It perfectly blends both the worlds — Indian and American — from food to music and dance — showing the essence of the Indian American experience. The film also stars Meera Syal, Kerri Medders, Aryan Simhadri, and Michael Bishop.

“I am really excited about this movie,” Avantika tells American Kahani. “I really hope the audiences will take away from the film that it is okay to experiment and follow one’s passion.” She believes that for young kids to limit them isn’t a healthy mindset. “You should be able to try different things and know that you can do something,” she says. “I think having that faith in yourself is a very important aspect of growth and it’s something the film highlights very much. So I hope that people and kids, especially from the South Asian community, are able to take it that way.”

Despite the familiar territory of playing an Indian American girl, Avantika had to prepare for the role. “Since this role requires DJing and Rhea also waits tables, it was important for me to understand how both of those worked,” she tells American Kahani. So she took a month and a half worth of training for DJing and learned the fundamentals and the details of the setup, etc. “In terms of waiting tables, I think that was also very important to get into her character, so I would kind of walk around with a stack of plates, and learn how to clean the tables really fast.” Even in her hotel room, Avantika had a big stack of ceramic plates and a tray and a DJ set up — “just so even when I was in my room, and when I was quarantining, I still had the opportunity to practice.”

The teen had to go through the “typical” audition process, where “you do an audition, then you do a callback, and then you have a producer session and then eventually you perform in front of the entire network — in this case Disney — and then they sign off on you and that’s how you book the role.”

“Spin” was entirely shot during the pandemic, and Avantika says she is really blessed to be able to work during the pandemic. “People were being laid off, a lot of people, especially actors, weren’t even able to go to their jobs, a lot of films were getting canceled.” Everyone wore masks, everyone maintained safety restrictions, she says, adding that the only downside was not being able to see a lot of the cast and crew. “But other than that, I really loved the experience.”

Working with a diverse cast was also a learning experience for the young actress. “The more diverse the cast you work with, the more you learn from the people around you, because they come from different backgrounds, and I think they have different lessons to teach you,” she explains. “I think that’s one of the best things about being in the film industry — you learn a lot from the people you work with.”

One of the advantages of the story of“Spin” is its relatability. “The story is very relatable and it plays a big part in making a diverse cast palatable to mainstream audiences,” she notes. “It is sad that we have to do that, but it is also necessary to keep creating opportunities in the South Asian community.” She thinks it’s “a great way” to introduce Indian actors to a wide mainstream audience. “Honestly I think people will be able to relate to the characters because not only do we have a really well-rounded Indian cast, we have other actors who come from different ethnic backgrounds as well. So there’s something for everyone here, and I think people will find a little aspect of their culture in at least one of the cast members on screen.”

Avantika is cognizant of South Asian American actors who have created the space for young talent like hers. “I would not be having the opportunities I have today without those people who paved the way before me, and it’s important to recognize, acknowledge and appreciate that.” But she is aware that there is a long way to go, and feels that films like “Spin” are “going to progress that path much faster.”

She looks up to Mindy Kaling and Priyanka Chopra, and is attracted to their different career paths, “because there are aspects of both of their careers that I am inspired by and that would like to embody in my own career path.”

Aware of her Indian ethnicity and its limitations, Avantika can see herself playing characters where the Indian identity is not a central part of the character arc. “I think that’s really important for representation as well,” she notes. “While we are highlighting a person’s culture, a person’s heritage, it is important to also create characters where their culture and their heritage isn’t all that their story revolves around. I think that’s the only way — a mix of those two kinds of characters – that we are going to be able to go into mainstream media.”

She is currently working on a Netflix film — “Senior Year” — where her character “does not revolve around her being an Indian.” Starring Rebel Wilson as a cheerleader trying to reclaim her high-school life after being in a coma for 20 years.

Avantika grew up in Union City, California, the only child to Anupama Reddy Chintala, chartered accountant and real estate manager, and Srikanth Vandanapu, a software engineer.

She ventured into Hollywood after establishing herself as a dancer. She is trained in Indian classical dance (Kuchipudi and Kathak), as well as in ballet and contemporary forms of dances. “All these dance forms are rigorous, especially Indian classical dance is really, really rigorous,” she notes, adding that it required her to be “super disciplined.” She credits her dance training to have changed her a person, “to keep myself grounded and consistent. I don’t think I would’ve been as resilient as I am today, had I not been a dancer.”

As a dancer, Avantika competed a lot as well. “When you compete, you win some, you lose some,” she says, “and that whole rollercoaster of a ride and that rejection, in a sense, of maybe not winning,” has been helping her in her film career as well. Avantika participated in several dance shows and competitions and won second place in the first North American edition of ZeeTV’s reality show, “Dance India Dance Lil Masters.”

When she transitioned to acting, she decided to apply the same logic that she had when she was dancing —- “if you win, that’s great, but if you don’t, that’s okay.”

Despite graduating from high school at age 13, Avantika is back in school. “When I did pass out, I did it very fast, and I wasn’t kind of able to get the full high school experience.” She wanted to give it “a second try” to get the whole high school social life “which I think is a big part of learning.”

But then came Covid and two years of her high school “have already been compromised, so I don’t know where I will go from here,” she says. She however admits that it’s easier to manage school and acting in America, than in India. “Most people in LA are managing some sort of education with acting, so it helps to have that community of people around you to support you.” While working in India, Avantika was “definitely struggling a lot more to manage school and acting because when I was on set I wasn’t given time to study and I would kind of have to come home [to finish it].”

She made her television debut in 2018. She stars as Monyca in “Diary of a Future President” on Disney+ and can be heard as the voice of Kamala in Disney Junior’s “Mira, Royal Detective.”

Her three years in India, working in the Telugu film industry, have also played a significant role in her evolution as a person, teaching her “a lot about adapting to different environments.”

Avantika lived and worked in India from age 10 to 13. “It was definitely an interesting experience because I grew up in America, and traveling to India and displacing myself for three years is a little bit different.” But it was her fluency in Telugu that helped her there. “I was very lucky as my parents taught me Telugu from a young age, and I can speak it fluently, I can understand it, and I can speak like a native. So when I went to India, I was at an advantage compared to a few of my friends in the Telugu community who were born and brought up in America,” she says. “Knowing the language really, really well helped me kind of adapt a little bit better,” despite it being a different environment.

She debuted as a child artist in “Brahmotsavam,” starring Mahesh Babu, Kajal Agarwal, Samantha, and Pranitha. She was then seen in “Manamantha,” with Mohanlal and Gauthami. Later, she signed on for “Premam,” starring Naga Chaitanya and Shruti Hassan.

Even now she’s been getting a couple of offers from the Telugu film industry, and some roles interest her. But she doesn’t believe “there’s a play in putting one leg there and one leg here. I believe you should work hard wherever you are, and if you want to transition somewhere, go ahead and do that, but doing it at the same time, I just think it’s just going to be a little bit adjusting.” So unless there’s a role that “really really speaks” to her, she would want to spend her time here until that role.