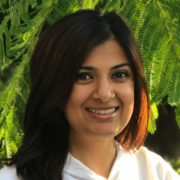 We Must End Period Poverty and Menstruation Shame, the Invisible Facets of Gender Bias

Most of us have at least heard of “Indian Matchmaking” on Netflix by now. If not, check out my “Cringe and binge” review of the series last month. I am ceaselessly fascinated by ‘process’ when it comes to the creative arts and wanted to share a chat I had with the creator and executive producer of Indian Matchmaking, Smriti Mundhra.

Smriti is a second-generation filmmaker. Her father was the illustrious filmmaker Jagmohan Mundhra, who is best known for helming biopics “Provoked” (2006 Aishwarya Rai), “Bawandar” (aka Sandstorm, 2000, Nandita Das), and “Kamla” (1984 Shabana Azmi). Smriti began her own journey as a filmmaker in her teen years. When most of us were trying to get fake IDs to buy alcohol or cigarettes, she was forging internships on film sets (reminiscent of Mae ‘Maeby’ Fünke a la “Arrested Development” no doubt!). She produced her first award winning feature film “Bomb the System” at the age of 22 and hasn’t looked back since. Earlier this year, still shy of 40, she received her first Oscar nomination for her documentary short “St. Louis Superman,” a film that becomes even more relevant as the BLM movement continues to grow.

I wanted to chat with Smriti about her response to how “Indian Matchmaking” has been received, and to hear from her what her motivations were around this series that has sparked so many conversations in households across the world. Excerpts from the interview:

AB: “Indian Matchmaking” is the #1 series on Netflix in India, and in the top 10 in the U.S. How does it feel?

SM: It’s been amazing and overwhelming. Maybe I was naive, but I was absolutely not prepared for this much interest and conversation, and the mania around the show. I’m glad it’s got people talking.

AB: It definitely has a lot of people talking. Some people love it, and some people absolutely hate it.

SM: I’m happy for all of the conversation. I was prepared for the critiques and the backlash as well. I think this is a super triggering topic that people have very strong opinions about. When you have something that comes out of India and reports to represent South Asian culture, and then it gets so big — there are going to be people who feel left out of it; that it didn’t cover their experience of this very broad topic of marriage and arranged marriage. That’s fair — I understand where that is coming from. I think the conversation and critique is really good. We made this show to start conversations. We wanted people to re-examine the things that we have ingrained in our society and our attitudes towards marriage for a really long time, and we don’t really talk about and quietly accept and tolerate. This show was made for an Indian and Indian diasporic audience. It wasn’t made for a Western audience. That also is a part of the conversation and makes it a little tricky. Because you have culturally specific content, that is available globally. How do you balance — who is your audience? Who is this for? So, when something like this blows up outside of the diaspora, in hindsight it poses all these questions — why didn’t you include this? Explain this? Why didn’t you talk about this? But we were making the show for people who wouldn’t necessarily need that context or explanation. We didn’t want to start from the place of making it for a Western gaze.

AB: One of the criticisms I have seen a lot is that the show propagates stereotypes, and biases such as colorism, casteism, etc.

SM:  It’s not the job of the show to judge or critique. It’s not that type of docuseries. It’s a dating show. Our goal was to present the reality of this world as accurately as possible. And let the viewers be the critics. [Matchmaking] is a problematic system that does not work for everybody. There are people who deliberately move against it, and others who opt into it. We show that full range of experience and their interactions with the idea of traditional marriage. Sima comes from a very traditional stance. Her arc on the show is recognizing that she must also grow and evolve if she’s going to be able to successfully run a business. She has to be responsive to the demands and needs of her clients, that are changing. The clients are also demonstrating their dynamic between wanting to hold on to their traditional culture & identity, but also rubbing up against what feels problematic and saying their truths. The one thing we did try to do was make sure there was enough diversity in perspectives and ideology in the show, so that it wasn’t just a bunch of people desperate to get married, who will accept anything, or any critique. If there was any inherent commentary it was that – let’s show the tradition, as it authentically is, and show the new generation that is pushing back against that, as they authentically are, and let the people decide for themselves. We didn’t try to consciously expose the flaws, but we also didn’t try to hide any of them.

AB: As a filmmaker myself, I feel frustrated when I hear people refer to this series as a “reality show.” There is a distinguishable difference between reality TV and a docuseries, and I would love it if you could shed some light on that, and how it relates to this particular series.

SM: For the most part, we’ve seen dating shows through the lens of “Reality TV.” “Bachelor,” “Too Hot to Handle,” etc. Those shows are much more heavily produced. They have an inherent framework or gimmick — whether it’s a bunch of people living in the same home competing for the same man, or whatever. [The producers] are casting people who are very well-versed in reality TV — models, actors, influencers type of people – people who already have or are creating a public platform. In a docuseries — yes there [is] an organizing principle. It’s a dating show about Indian millennials trying to get married — reconciling their progressive, modern, western beliefs or lives with their traditional cultural identities. In doing that, we wanted to cast real people who are going through this process. Not people who fit a certain physical type, or who are there for some kind of tokenized representation. And certainly, we were not casting for characters — like we need a hero, a villain, a victim, a shit-starter, etc. The only objective in casting was — let’s find the people who are the most open, authentic, and willing to be vulnerable. And within this somewhat narrow world of matchmaking, let’s try to push for as much diversity as we reasonably can. We don’t have a team of producers on the ground trying to manipulate people into creating drama. We tried to stay close to reality as much as possible. There was nothing emotionally manipulative about the show. It wasn’t like ‘This was actually a really good date, but we need to make it look like a really bad date for the show.’ We feel that there is inherently enough emotion and drama in the course of normal people dating that we trusted that would be enough to make a great show. Of course, it’s a TV show — it’s edited; it’s a narrow slice of somebody’s life. It’s never going to be a full, authentic representation of their full life and character.

AB: Speaking of characters — I think it’s very commendable that despite all the responses, positive & negative, none of the cast members have spoken ill of the producers or the TV show.

SM: I love our cast. The participants are amazing. Most of them hadn’t met each other or even knew who was on the show. But [now] they’ve formed almost a support group for each other. They’ve all handled it with so much grace and dignity. And this is another thing that is so different from being on a traditional reality TV — [those people] are expecting a certain degree of fame, and you invite that. When you’re on a show like this, they went overnight from being regular people to viral celebrities. No one expected the show to blow up as much as it has. Considering all of that pressure, it’s a lot to deal with — where the whole world feels like they have an opinion on your life. Especially for those who have been getting a lot of vitriolic comments — I am so proud of the participants of this show and can’t speak highly enough of them.

AB: Do you have any favorites?

SM: (laughs) I can’t choose favorites amongst my children! I love everyone in the cast. They are all incredibly real, honest, authentic people, who went along for the ride and were up for the adventure. They opened up and brought their authentic selves to the experience, and I love them all for that. I have a soft spot for Aparna because I can really relate to her. To me, she really symbolizes the reaction to what society expects of women. The way she reacts to some of those really unfair expectations – that women should be pleasant and conforming and conciliatory. Aparna is the manifestation of saying a big “F-you” to that. [Her viewpoint is] I’m a person that is ambitious, and successful and I got here because I’ve held myself to a very high standard, and I’m going to hold other people to that high standard – whether it’s a matchmaker, or someone I go on a date with.  I see someone that is unapologetically herself, but also self-aware, where she can think differently or grow into something new.

AB: The series left on a note that leaves the viewer speculative of Season 2. Is that a correct assumption?

SM: We don’t know yet — it’s up to Netflix, and we’re still a little ways out before that [is decided].

AB: Is there anything specific you would want to do or show next time around?

SM: The goal for me always, in everything that I do, is to keep widening the aperture of what we see in the world around us. As much as we pushed for diverse perspectives in this first season of IM, it’s still a very narrow slice of the South Asian experience. The goal is always to push for more… but it has to be done in an authentic way. Now that we’ve proven the model — that a dating show from a culturally specific view can work, that people are interested in it — I think we’ll have a lot more opportunity to expand what that world looks like in upcoming seasons – geographically, ideologically, culturally.

For those who haven’t already seen it, do watch Smriti Mundhra’s directorial debut documentary “A Suitable Girl,” available on Amazon Prime. The film follows three young Indian women for four years as they go through the arranged marriage process. And you will see the story of “Sima from Mumbai,” trying to find a match for her own daughter as well!