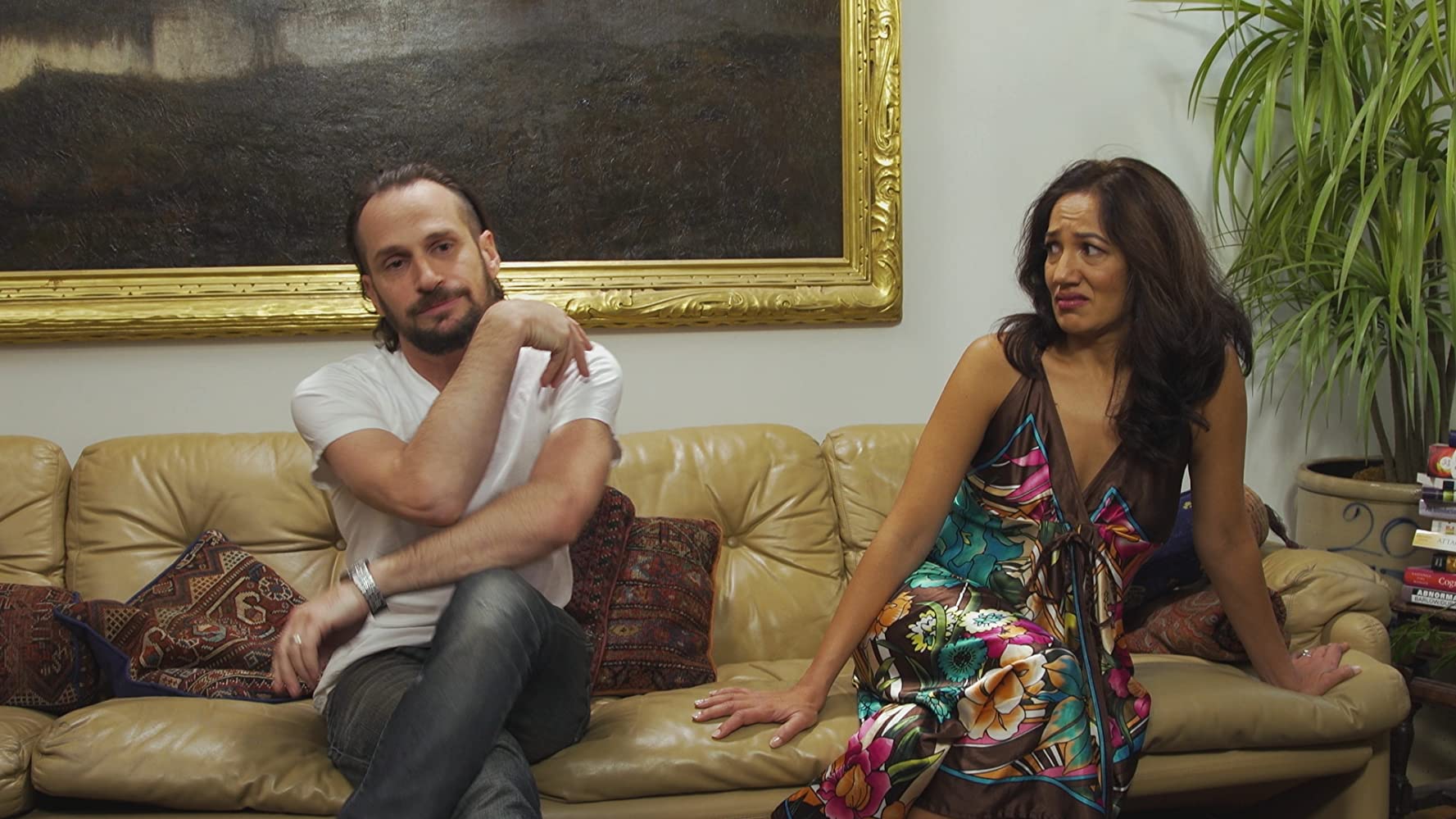 Actress Purva Bedi and her husband, David Andrew Stoler, always laugh about the absurdities of married life. The couple, who has been married for almost a decade, decided to take some of the more ludicrous elements of their marriage and weave them into a series. And lo and behold, “Shrinkage” was born.

“Each episode is a 5 minute serving of schadenfreude,” Bedi says, adding that the “super short” episode will enable working parents  – like her and her writer husband Stoler – have the time to watch the hilarity of wedded unions.

“Shrinkage” follows Bedi and Stoler through their therapy sessions with Dr. Dolan (Andrew Dolan). “It’s a zany portrait of our marriage but pushed to the extremes,” Bedi says. Her character is a “narcissistic self-absorbed actress” and her husband “devolves into a fragile introverted writer with no self-esteem.” The first season of the series is currently streaming on Amazon.

In an exclusive interview with American Kahani, Bedi spoke about the series, her foray into direction and production and her journey as an Indian American actress.

“Shrinkage” was shot over one long weekend. “It was a chance for everybody to have a great time, and to push themselves, to do their best,” Bedi says. And for her, it was a different experience to construct something where all voices were heard. “There was a sense of real freedom,” she says. “I was the captain of the ship, instead of being down in the trenches.”

Bedi also acknowledges that “Shrinkage” gave her a chance to tell a story that viewers otherwise wouldn’t see, as it probably wouldn’t be told. And she got to star in it. “The role I did would’ve possibly done by a 20-something blonde, had it not been by production,” she confesses. “There’s a certain level of racism that’s inherent in the industry,” says Bedi, who has several theater productions, TV shows and films to her credit. “I have worked nonstop for the last two decades,” she says.

At one level, Bedi says “Shrinkage” is a “funny comedy about marriage,” and on the other side, it is a story of a “complicated woman of color, in a marriage, that happens to be interracial.” This kind of work usually doesn’t get a platform,” she observes.

Bedi is known for her roles in films like “American Desi,” “The Assistant,” “Sully,” “Equity,” “My Cousin Sister’s Wedding,” and “Wings of Hope,” among others.

She has worked extensively in television as well. A 2019 Drama Desk Award winner for her work in “Dance Nation,” Bedi is an associate artist of Target Margin Theater and a member of the Actors Center. She was also seen in Jaclyn Backhaus’ “India Pale Ale,” as well as Hammaad Chaudry’s  “An Ordinary Muslim.”

Following are excerpts from the interview:

Q: How did the idea for “Shrinkage” come about?

A: I’ve been married for a decade this October and basically David and I laugh at how absurd marriage can be. So we thought let’s make a show – one joke per episode with super short episodes that people like us – working parents  – have time to watch about the hilarity of wedded unions. This was pre-Covid, but even now we have no time at all between taking care of our children and trying to get any work done.

Q: How would you describe “Shrinkage”?

A: It’s a comedy for people who have no time but need a good five minutes of schadenfreude between Zoom calls and homeschooling. It’s a zany portrait of our marriage but pushed to the extremes – so my character is a narcissistic self-absorbed actress and David devolves into a fragile introverted writer with no self-esteem. It’s us at our very very worst for comic effect.

Q: How did the series come to Amazon?

A: We were looking for a platform where we could share it with the widest audience possible and well I just look at our credit card bill every month and I’m like, oh, Amazon. This is where people will see our work. It just made the most sense to us.

Q: Forbes called “Shrinkage” a mockumentary. Do you agree?

A: It’s our own little creation isn’t it. A genre of its own. I don’t know what the genre is, exactly. Someone likened it to HBO’s “Curb Your Enthusiasm” and I think that’s a good show for comparison. We play ourselves. All the characters are named the same name as the person playing them – and yet it was scripted and all the roles were written for these people but in real life we are all only a little like the people we play (I hope!). And in truth, we’ve never been to couples therapy – though our marriage certainly could benefit a lot from going.

Q: As an actor who has done theater, TV and films, what do think of the streaming platforms and the appeal of web series? Do you have to approach them differently?

A: Absolutely. When you make your own work you have so much more freedom. I’m making the role I want to play and we all take risks. Our friends all came on board, and we got to be totally collaborative. Andrew Dolan and I were improvising many lines that made it into the final edit. David who had never acted in his life played the lead role. All of our directors got to direct which they are not yet given much opportunity to do. David Alan Basche, Vanessa Hoffman, Jeremy Brooke, Hiroshi Hara – all four of our directors are known for other things primarily.

Q: Your husband is not a professional actor. How was it for you both to act together? What were some of the challenges?

A: So in addition to being an actor I also teach acting at a studio in New York. And I did not single direction or piece of advice while we shot this. I just did not want to antagonize him while he tried this thing that was very new and scary for him. Dumb move on my part! After it was edited, he said to me, “Why didn’t you just tell me to make eye contact? I didn’t know I was supposed to do that.” It works for his character and the hilarity of this couple who do not connect. On the other hand, Andrew Dolan and I had lots of eye contact though – which is a hilarious subplot of the show.

A: They have changed. And yes the opportunities keep expanding. But it’s not enough. I mean I have been doing this for 20 years and only now when I make my own show am I getting an opportunity to have some fun on camera. Why is that? Why am I not a series regular on someone else’s TV show? It’s certainly not for lack of skill or experience as an actor. It is for lack of opportunity for a working actor who is a person of color. I am not Mindy Kaling, and I am not Priyanka Chopra. But I have a lot to offer.

Q: What are some of the other projects that are in the pipeline for you?

A: I just wrote a first draft of a play and we are having a private reading of it. It’s a drama about my mother, Susham Bedi, who just passed away last March. She was a writer and an actor and an amazing woman. I’m very inspired by her and want to tell her story.

Q: Any advice for South Asian Americans who want to venture into the streaming services space?

A: Write it. Assemble a team of people you respect and love. And make it. You can do so much with so little nowadays. And share it – you don’t need a fancy studio to give you a stamp of approval. You can get your work out there on your own and build your own craft, experience and team of collaborators with your own hard work. Get your story out there.