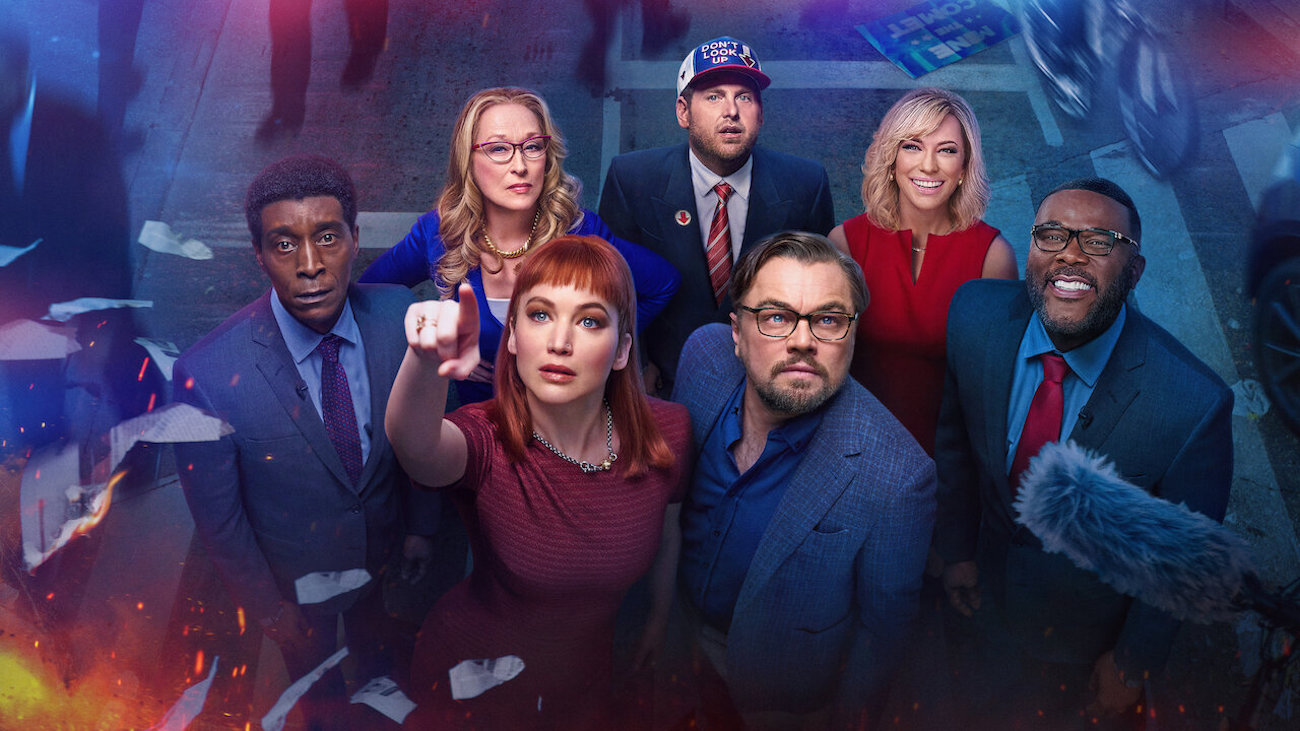 On Christmas day we saw a stunning show at the Morrison Planetarium in the California Academy of Sciences, San Francisco. It was an immersive, hyper-realistic experience. Masked spectators looked up virtually at faraway galaxies and the workings of our own planet in the spiral Milky Way.

As we gleaned facts about the origins of life on Earth, we wondered about life on other planets. Alien life-millions of light-years away looking down on us. Suddenly the need to share our minutiae on Instagram: What we wore, what we ate, who we met, seemed to melt away. We came away awed and uplifted. More mindful to save our planet. When we got home, It was serendipitous, “Don’t Look Up” was streaming on Netflix.

This is a 2021 comedic satire produced by Adam McKay that seemed to be the perfect choice for the evening. The movie opens with a warning of a comet hurtling down towards Earth. Hailey’s comet was visible from Earth in 1986 and won’t be visible again until 2061 but this movie is about a catastrophic astronomical event. A planet-killer.

Our eyes widen as we see Kate Dibiasky (Jennifer Lawrence), an astronomy Ph.D. candidate at Michigan State University, discover a previously unknown comet through the Subaru Telescope. Her professor, Dr. Randall Mindy (a bearded professorial Leonardo DiCaprio), calculates that the comet would impact Earth in about six months, and would destroy our planet. This was an awful prediction. Enough to cause us to sit on the edge of our seats.

The protagonists share this doomsday news with Dr. Teddy Oglethorpe (Rob Morgan) the head of the Planetary Defense Coordination Office. He accompanies Dibiasky and Mindy to present their classified information to the White House. But the movie takes on an unexpected tone in the Oval Office. President Janie Orlean (a caricatured bespectacled and blond Meryl Streep in a tailored red suit) and her pompous son, Chief of Staff Jason Orlean (Jonah Hill), ridicule them. Question their validity. They are worried about midterm elections rather than working on a strategy to save the planet.

Agreed that the news was almost unbelievable but McKay’s attempt at displaying the President’s utter disbelief at scientific information was horrifying rather than comedic. Oglethorpe urges Dibiasky and Mindy to leak the news to the media. The duo appears on Brie Evantee and Jack Bremmer’s (Cate Blanchett and Tyler Perry) talk show to warn the public. But the hosts trivialize their message. Dibiasky has a meltdown on national TV about the threat. This perpetuates a contrary domino effect.

The mindless, oblivious masses glued to their phones make memes about Dibansky and she becomes the global laughing stock in a few hours. On the other hand, the (heavily medicated) poised Mindy becomes an overnight TV sensation. Even the Wall Street Journal news story is debunked by the Orlean appointed head of NASA. The story takes a turn when Orlean is named in a promiscuity scandal. She holds a press conference to announce a project to launch a spacecraft to strike and divert the comet’s path. So everyone is back on track? NO!

In the interim Peter Isherwell (Mark Rylance), a loathsome tech billionaire and CEO of BASH cellular discovers that the comet is composed of trillions of dollars worth of precious minerals. He commands Orlean to abort the plan of nuking the comet. The White House agrees to commercially exploit the comet by splitting it into fragments.

This is when I fell asleep, wondering if they would be able to kill two birds with one stone. The world is plunged into cries of “ Look Up” and “Don’t Look Up.” I dream of towering theropods eating Orlean and Isherwell on another planet. But to my horror, this actually happens in the film.

I have enjoyed other movies and shows Adam McKay is known for: “The Big Short” and “Vice” but the serious premise of “Don’t Look Up” gets derailed in careless haste. Stellar cast loses their punch in the lackadaisical narrative. In a disorganized way, it retells the story of Emperor Has No Clothes. Regardless, as the world is submerged in the threat of a global pandemic, “Don’t Look Up” is a wake-up call for us Earthlings to pay attention to. Not to be brainwashed by social media, propaganda and self-serving tech giants but to LOOK UP and elect responsible leaders who will protect us from looming existential threats of climate change, a looming nuclear war, economic inequality and disease.

The movie is currently trending on Netflix.

With one foot in Huntsville, Alabama, the other in her birth home India and a heart steeped in humanity, writing is a contemplative practice for Monita Soni. Monita has published many poems, movie reviews, book critiques, essays, and two books, My Light Reflections and Flow through My Heart. You can hear her commentaries on Sundial Writers Corner WLRH 89.3FM.