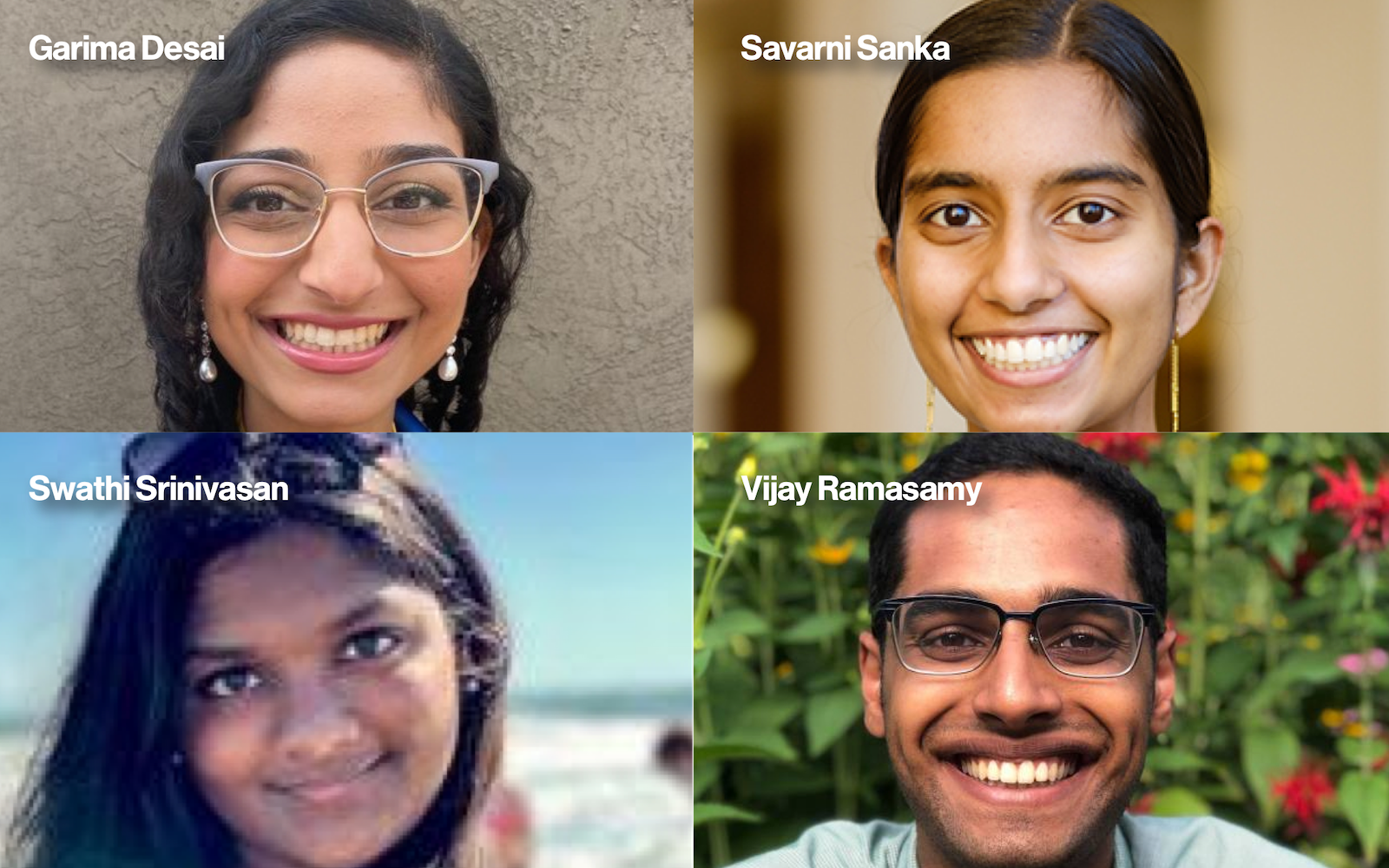 Four Indian Americans are among 32 Rhodes Scholars, one of the top scholarships available to American college students. They are Garima P. Desai of Fremont, California; Vijayasundaram Ramasamy of  Overland Park, Kansas; Savarni Sanka of Cary, North Carolina; and Swathi R. Srinivasan of Beachwood, Ohio. This year’s class was selected entirely virtually. Those selected will go to Oxford next October to study in fields broadly across the social, biological and physical sciences, the humanities, and public policy.

Scholars are chosen in a two-stage process. First, applicants must be endorsed by their college or university. This year more than 2,300 students began the application process; 953 were endorsed by 288 different colleges and universities. Committees of Selection in each of 16 U.S. districts then invite the strongest applicants to appear before them virtually for interview.

According to Elliot F. Gerson, American Secretary of the Rhodes Trust, “this year’s class reflects the remarkable diversity that characterizes and strengthens the United States.” Twenty-two of the 32 are students of color; ten are Black, nine are first-generation Americans or immigrants; and one is a Dreamer with active DACA status. Seventeen of the winners are women, 14 are men, and one is non-binary.

The scholarships were created in 1902 by the Will of Cecil Rhodes and are provided in partnership with the Second Century Founders, John McCall MacBain O.C. and The Atlantic Philanthropies, and many other generous benefactors. The first class of American Rhodes Scholars entered Oxford in 1904; those elected today will enter Oxford in October 2021.

Desai is the first student from the University of California, Santa Cruz, to be chosen as a Rhodes Scholar. She graduated in May 2020 with a double major in Environmental Studies and Economics. “When they announced it, my name. It’s like I almost dreamed it,” she told ABC News. “It was really a dream come true. And after we talked a little bit, I turned off my computer. I opened my door and screamed to my parents, I’m a Rhodes Scholar, I won!” She currently works as a transportation planner in Oakland, California. While at UC-Santa Cruz, Desai worked as a research assistant on issues related to housing and transportation. She is passionate about using economics as a tool to solve pressing climate issues. At Oxford, Desai plans to pursue an M.Sc. in Economics for Development and an M.Sc. in Environmental Change and Management.

Ramasamy graduated from Johns Hopkins University in 2018 with a major in Public Health Studies. Since graduation, Ramasamyspent a year as a special assistant in the Baltimore City Health Department. He is currently the Policy and Budget Advisor in the Office of Kansas Governor Laura Kelly, with responsibilities for the State’s COVID-19 re-opening plan. “It’s been incredibly inspiring to see what public health workers are doing every day with so few resources and with such an incredible amount of pressure,” Ramasamy told the Johns Hopkins newspaper. “It really solidified for me that I want to understand how people create sustainable health systems around the world and how we can defend government services in the United States.” He  graduated in three years, making the Dean’s List every semester. At the university, he was an active volunteer in healthcare and social services in underserved neighborhoods. He was also co-President of the University Hindu Students Council, worked as a research and teaching assistant in public health, and has been very active in political campaigns. At Oxford, Ramasamy intends to do the M.Sc. in Comparative Social Policy and the Master of Public Policy.

Sanka is a senior at Wake Forest University where she majors in Politics and International Affairs and in Spanish, with a minor in Middle East and South Asia Studies. “It’s an incredible honor to be named a Rhodes Scholar,” Sanka told the university newspaper, Wake Forest News. “I owe my success to every mentor and teacher I’ve had from kindergarten to now. Every single professor at Wake Forest has influenced me in some way.”A students with a perfect academic record, Sanka is a leader of many student organizations including the Hindu Students Association and the Student Association for the Advancement of Refugees. She has also studied or done volunteer work in Spain, Morocco, and Nicaragua. She is passionate about improving the welfare of migrants and marginalized people everywhere. “Having had the opportunity to work alongside Winston-Salem’s migrant community has been one of the most rewarding parts of my college career,” said Sanka. “I’ve been involved with migrant communities for a long time,” she told the university newspaper. “My parents immigrated to the States from India in the 1990s and seeing the marginalization and silencing that migrant communities often face, I wanted to be a part of building more equitable and just societies where everyone has access to opportunity and where everyone’s voice can be heard.” She is the recipient of the Joseph G. Gordon Scholarship, and is a member of Phi Beta Kappa, the nation’s oldest and most prestigious academic honor society for the liberal arts.At Oxford, she plans to do the M.Sc. in Refugee and Forced Migration Studies and the Master of Public Policy.

Srinivasan is a senior at Harvard College with double concentrations in Social Studies and History of Science, with a focus on public health inequality. She is also writing a thesis for the chemistry department. She was an intern at the U.N. Joint Program on HIV/AIDS in Geneva, has done extensive research and activism on the opioid epidemic, and chaired the Policy Program at the Kennedy School Institute of Politics. Srinivasan is also a Ghungroo choreographer. At Oxford, Swathi intends to do the M.Sc. in International Health and Tropical Medicine and the M.Sc. in Comparative Social Policy. She told the Harvard Crimson that she is grateful to her friends and parents who encouraged her to apply for the Rhodes Scholarship. “I was diagnosed with cancer this time last year, and so I was dealing with chemotherapy all throughout last semester,” Srinivasan said. “I would never have imagined that by this time this year I would be done with treatment, I would have started writing multiple theses, that I would be applying for — let alone winning — the Rhodes Scholarship.”