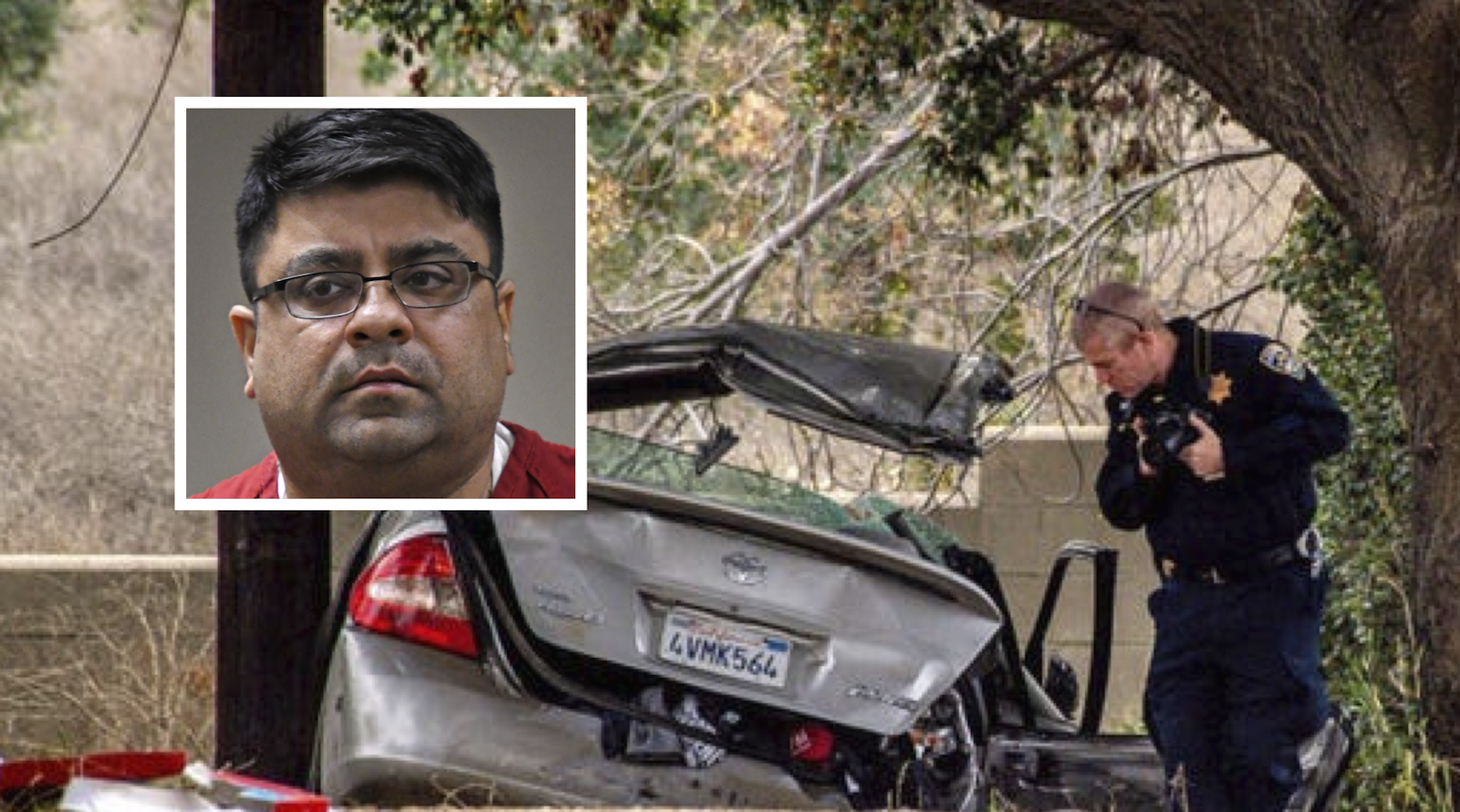 A Corona-area man from Temescal Valley, California, accused of chasing down and ramming a car occupied by six teenagers, causing the vehicle to crash and kill half of the boys exactly one year ago Tuesday, must stand trial on three counts of murder and other charges, a judge ruled.

Anurag Chandra, 43, allegedly went in pursuit of the teens after they pulled a prank at his home on Modjeska Summit Road.

Following a preliminary hearing at the Riverside Hall of Justice, Riverside County Superior Court Judge Charles Koosed found there was sufficient evidence to warrant a trial on the murder counts, as well as three counts of attempted murder.

He scheduled a Feb. 2 post-preliminary hearing arraignment for the defendant, who’s being held without bail at the Robert Presley Jail in Riverside.

Chandra has pleaded not guilty to charges in the deaths of Daniel Hawkins, Jacob Ivascu and Drake Ruiz — all 16 — on Jan. 19, 2020.

The other three boys – 13-year-olds Joshua Hawkins and Joshua Ivascu, along with 18-year-old Sergio Campusano, who was at the wheel – were injured, but survived. They were taken to Inland Valley Medical Center in Wildomar for treatment according to media reports.

According to California Highway Patrol investigators and prosecutors, as reported by The Press Enterprise, the boys were having a Sunday night sleepover at one of their homes and decided to try a “ding dong ditch” prank in the neighborhood, which is just south of Corona.

Shortly after 10 p.m., five of them piled into a Toyota Prius parked on Modjeska Summit, while another went to Chandra’s residence and rang the bell several times, investigators said. The youth then ran to the Prius, which raced away from the location.

CHP Officer Juan Quintero told The Press Enterprise that Chandra in his 2019 Infinity Q50, bore down on the Prius at high speed along Temescal Canyon Road, approaching Squaw Mountain Road. The lawman alleged that the defendant rammed the Prius, causing it to spin out of control and slam into a tree on the side of the road.

“It’s just beyond what someone’s reaction should be to someone ringing your doorbell and running away,” DA’s office spokesman John Hall had told CBS Los Angeles, at the time of the incident.

“It’s the worst nightmare,” Daniel Damien, a father of a boy who knew the victims, told CBS Los Angeles, right after the crash.

Family members told reporters that the boys were fleeing out of fear and were trying to avoid a confrontation with Chandra. There was no prior dispute between the teens and the defendant, according to prosecutors. Family members also said that the teens did not know Chandra before they rang his doorbell.

Talking to CBS Los Angeles after the incident, Damien had said, “I understand people get road rage, but in this case, there were six innocent kids. I can’t understand why he didn’t stop.”

According to Press Enterprise witnesses followed Chandra back to his residence and alerted CHP officers, who arrested him roughly four hours after the collision.

Chandra has no documented prior felony convictions, but along with the murder charges, court records indicated that Chandra has already faced misdemeanor domestic violence charges including spousal abuse and willful injury to a child, as reported by CBS Los Angeles.