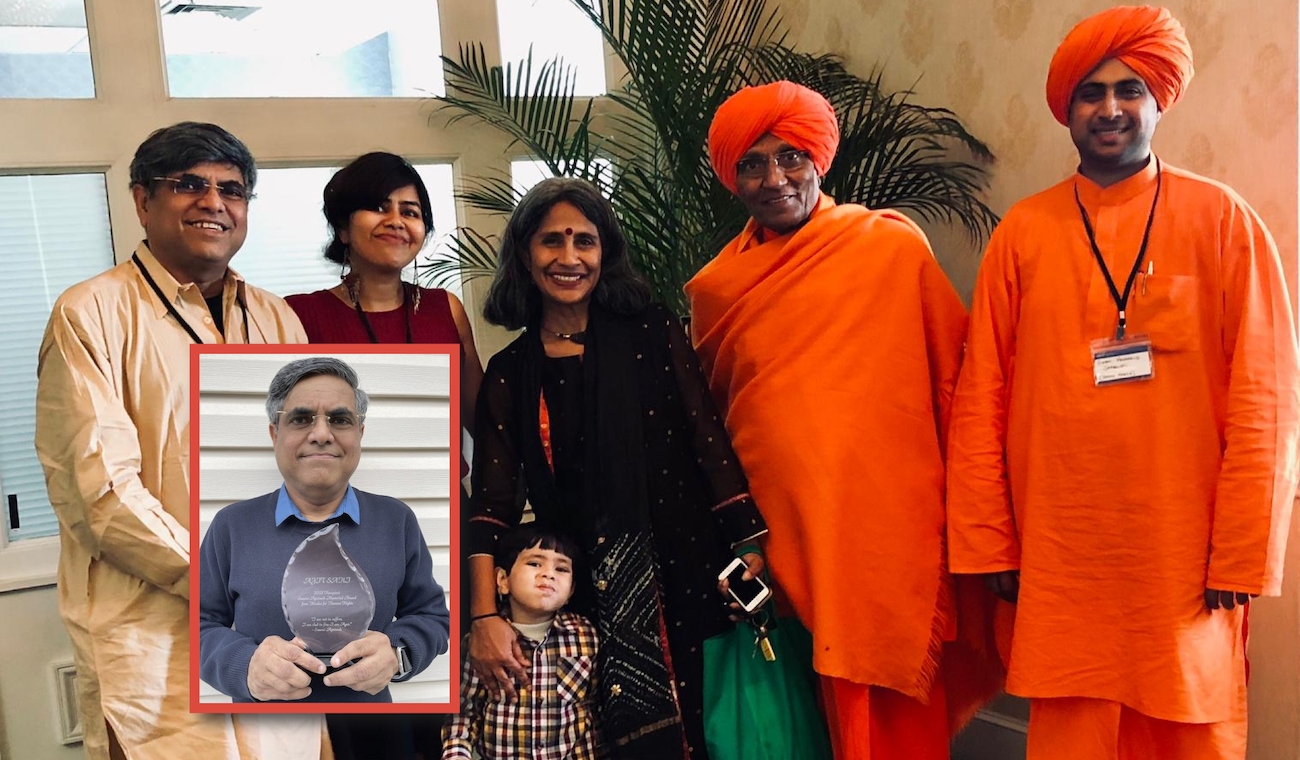 A Street in Flushing, N.Y., to Be Co-named to Honor First Hindu Temple in the U.S.

Civil rights activist Ajit Sahi of Washington, D.C., and India-based nonprofit Dhanak of Humanity received the inaugural Swami Agnivesh Memorial Award at the second annual virtual gala hosted by Hindus for Human Rights (HfHR), Dec. 18. Titled “Celebration of Hope,” the evening celebrated the nonprofit’s wins of 2021 and look ahead to the upcoming year.

HfHR advocates for pluralism, civil and human rights in South Asia and North America, and is rooted in the values of our faith: shanti (peace), nyaya (justice) and satya (truth). It provides a Hindu voice of resistance to caste, Hindutva (Hindu nationalism), racism, and all forms of bigotry and oppression.

More than 100 guests attended the online event and raised more than $25,000 from ticket sales and a live fundraising auction anchored by Shailly Barnes Gupta and Adam Barnes, of the Poor People’s Campaign and the Kairos Center for Religions, Rights and Social Justice, HfHR said in a press release. All proceeds from the event will support HfHR’s 2022 goals of doubling its budget to $300,000, its staff (to two), and its impact, the nonprofit added.

Additionally, attendees heard special messages about the impact HfHR’s advocacy has had over the past year. “It is inspiring to see you fight the good fight and come out on top,” Indian American comedian Sai D said in a message to Indian comedian Munawar Faruqui. “[J]ust remember that anyone who dares call themselves a standup comedian and anyone who respects free speech … we’re all standing in solidarity with you.”

An Indian student activist and prisoner of conscience, Umar Khalid shared a video statement recorded just days before he was incarcerated. “[A]n initiative like yours is extremely commendable in these times,” Khalid said, because HfHR “counters the Hindutva agenda that Hindutva is Hinduism.”

Anitha Rathod, program manager of the International Commission for Dalit Rights, gave a message of solidarity. “We applaud your resilience and the sheer will that you have shown,” she said. “[W]e understand the challenges in staying resilient and courageous in today’s world. With rising authoritarianism and growing threats to organizations and individuals who speak for the right of others … It has been exceedingly difficult to carry out crucial work.”

The inaugural Swami Agnivesh Memorial Award was given in honor of Swami Agnivesh (1939-2020), who HfHr described as “one of the few Hindu religious leaders to speak out against Hindu nationalism and caste.” Swami Agnivesh, who was close to many HfHR members, was inspired by the Hindu teaching of vasudhaiva kutumbakam: “the world is one family,” HfHR said, adding that Swami Agnivesh “fought for the rights of communities who were not necessarily his own: bonded laborers, religious minorities, Adivasis, and caste-oppressed communities.”

Sahi, advocacy director of the Indian American Muslim Council is a veteran journalist, and a dedicated campaigner for civil liberties, human rights and religious freedom in India for over three decades. He has testified before the Tom Lantos Human Rights Commission and spoken boldly about human rights violations in India. He has been a trusted mentor and close partner to HfHR, and, most inspiringly, being a Hindu, he has worked tirelessly for the rights of Muslim Indians. “He was a giant,” said Sahi about Swami Agnivesh. “People like him inspired tens of thousands, hundreds of thousands, in my generation. And I hope that he’ll continue to inspire many more.”

Dhanak of Humanity is a nonprofit organization in India that ensures that interfaith, inter-caste, same-sex, and other non-traditional couples can get married safely despite family, societal and legal obstacles. Dhanak fights for an individual’s right to choose in matters of marriage or relationships, against religious conversion for the sake of marriage, against honor-based crimes, and forced marriages in India. To date, Dhanak has helped over 5,000 individuals.

“We are truly grateful and overjoyed to be recognized for our work today,” said Shailaja, a member of Dhanak. “Indeed, we should all celebrate hope as the year closes, as it is hope that gives us the strength to remain focused on our shared vision to move forward towards a pluralistic society.” “And though the work is difficult,” Asif Iqbal, co-founder of Dhanak noted, “fortunately we have partners and friends from all across [the] world.”