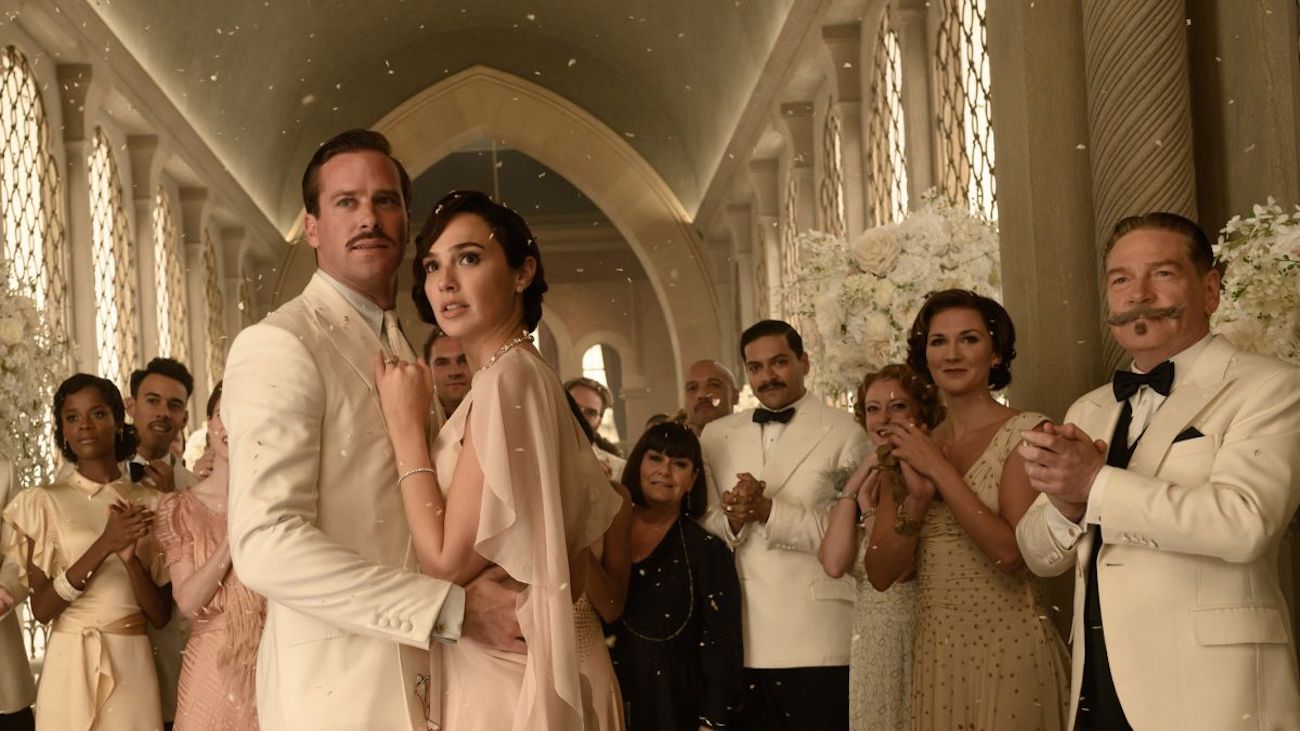 Want to go back in time with a homage to the grand old movies of Hollywood’s golden era? Replete of course with Orientalist representations of the mysterious East, filled with crocodiles, cobras and swarthy natives! Look at what’s just cruised into movie theaters this week: Kenneth Branagh’s “Death on the Nile,” with a glitzy star-studded cast, dazzling cinematography and special effects, all of which were displayed on an enormous XD Screen in our local movie theater. Quite the reintroduction to the “real world” in a hope to be the post-pandemic era.

Many Indians of my generation grew up on the novels of Agatha Christie and P.G. Wodehouse. And for me, it was comfort food, so to speak, to be sequestered at home rereading several of her novels during the long COVID pandemic and ensuing quarantine months. I recall the pleasure of settling down with a dog-eared version of her first novel, “The Mysterious Affair at Styles” (1920) at my parents’ home in India last year. Dame Agatha Christie’s murder mysteries were as replete with drama as her life. One of the world’s most famous writers, who wrote not just under her name but under various other noms de plume too, such as Mary Westmacott, she was amazingly prolific as a writer. Over six decades, she wrote 66 crime novels, 6 romances and more than 150 short stories. In total, she published over 125 works including 74 novels and has the reputation of being the second best-selling fiction author of the Western world, second only to William Shakespeare.

But even the renowned writer would have been astonished to see how her books have taken on a new life decades after her death. Christie’s female sleuth Miss Jane Marple has also had numerous screen incarnations, from Dame Margaret Rutherford in “Murder, She Said” (1961) to Angela Lansbury in “The Mirror Crack’d” (1980). However, Hercule Poirot remains the character who has appealed most to screen adaptations. In recent times, the BBC has produced a series of films based on “The ABC Murders” (2018), with John Malkovich essaying the role of Hercule Poirot.

Bollywood has not been far behind, with several films based on the Christie novels, from “Ghumnam” (1965) to “Shubho Mahurat” (2003). Interestingly, it is in this Hindi version of “The Mirror Crack’d” that both veteran actresses Sharmila Tagore and Raakhee appear together for the first time after “Daag” in 1973. The most recent version of “The ABC Murders” is the Malayalam film “Grandmaster” (2012) with Mohanlal playing the role of the Inspector. And now one hears that Vishal Bhardwaj who has his famous Shakespearean trilogy (2014), a slew of adaptations of Shakespeare’s plays, from “Maqbul to Omkara” to “Haider” under his belt, is now all set to produce one based on Agatha Christie.
But it is a long way from Billy Wilder’s “Witness to the Prosecution” (1957) to Kenneth Branagh’s “Death on the Nile” (2022). It is an even longer way from Albert Finney’s turn as Hercule Poirot in “Murder on the Orient Express” (1974) to Branagh’s in the 2017 version of the same film. These films have amusing stories behind them as well. Wilder’s cast for instance had Marlene Dietrich as the widow of the murdered man, and in one memorable scene, her trousers get ripped during a brawl at a German nightclub. The scene was written into the movie to show off Dietrich’s famous legs.

The earlier version of “Death on the Nile” (1978) features Peter Ustinov as the redoubtable detective Hercule Poirot. But it is Albert Finney who has the distinction of being the only version of Poirot to receive an Oscar nomination in 1974. Dame Christie herself is said to have appreciated it except for the mustache which she had complained was disappointing. She would have had no objection to Branagh’s mustache, I am sure. In “Peril at End House” (1932) Poirot advises his friend Hastings on growing a mustache: “If you must have a mustache, let it be a real mustache – a thing of beauty such as mine,” a sentiment that may well find many supporters in our part of the world.

However, die-hard Agatha Christie fans like half of my family may have a bit of a shock to see the elderly Belgian detective transformed into a dashing former military man. Christie herself had no such intentions, basing him on Belgian refugees in war-torn England as she reclined in her hotel room in Egypt with her anthropologist husband. She does refer to Poirot having won fame in his youth as a detective in the Belgian police force but that’s about it. However, Branagh’s version of the dapper detective is a far cry from that of previous actors like Peter Ustinov and David Suchet. He wields his cane like a rapier and races across the ship just like he did on the train in his previous role as Poirot in “Murder on the Orient Express” (1917). If anything, his mustache is even more luxuriant, one that even some of our Bollywood villains might envy. But Christie would have cringed to view the flashback as to how he started growing it in the first place. For romance is no longer on the backburner for this unrecognizable new avatar of Poirot. One watches with amazement as our elderly sleuth of the Christie novels has metamorphosed into this dashing ex-military man with an eye for Blues singers in smoky jazz music halls.

As for the rest of the characters, the narcissistic wealthy heiress of the book has turned into a somewhat more likable character in the film, if one can forget the bit that she has stolen her best friend’s man. As also her Marie Antoinette’s attitude towards the plebians. Oops! The role is essayed by Wonder Woman Israeli actress and former soldier in the Israeli Defense Forces Gal Gadot whose support for the Israeli military got the film banned in Kuwait and Lebanon. But the actors who won my heart in the film are the redoubtable Annette Bening who is superb as the domineering mother of Poirot’s friend Bouc and British Nigerian actress Sophie Okonedo who plays the role of the Blues singer who wins Poirot’s admiration. Dame Okonedo had been previously nominated for the Academy Award for Best Supporting Actress for her role as Tatiana Rusesabagina in “Hotel Rwanda” (2004).

And for us desis, what a delight to see Bollywood actor Ali Fazal as the dapper if a tad sleazy “slippery fish” lawyer Andrew Kachadourian, known as “Cousin Andrew!” Talking about sleaziness, the real Mr. Sleaze is none but the leading man Arnie Hammer who has been accused of some awful stuff. But I digress. One wishes Fazal had a bigger role in the film. Some may recall his wonderful turn as Queen Victoria’s Urdu tutor Mohammad Abdul Karim in the Stephen Frears film Victoria and Abdul (2016) with Dame Judy Dench. This was after the minor but crucial role he had played in 3 Idiots (2009).

Needless to say, I cannot recall the character of “Cousin Andrew” in the original novel. But the plethora of characters of color in the film has no resemblance to the original novel set in the 1930s which was peopled by white individuals. From the lawyer Andrew Kachadourian to the sultry nightclub singer Salome Otterbourne and her niece, Rosalie Otterbourne, what was written as a story of predominantly white characters, is represented in the film by a host of actors of color. Dame Christie would have found it difficult to recognize her original novel in this dazzling version of her novel. That aside, it would have been nice to see more of Egypt in the film than the Pyramids where the main characters had their amorous interludes. But for sheer entertainment value, I would give the film Roger Ebert’s famous “Two thumbs up.”

Dr. Shoba Sharad Rajgopal is Professor of International Feminist Studies at Westfield State University in Massachusetts, where she teaches in the Department of Ethnic & Gender Studies. Her doctorate is in Media Studies from the University of Colorado, Boulder. Before she arrived in the United States, she worked as a News Correspondent for the Indian TV networks based in Mumbai, India, and has also done in-depth news reports for CNN International. Her journalistic work focused on the struggles of women and indigenous people in the postcolonial nation-states. Her work has been published widely, in academic journals as well as newspapers and feminist magazines such as Ms. in the U.S.