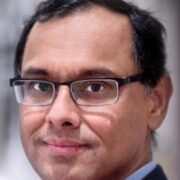 Though several groups were involved in the invention of external defibrillation, only one, led by Michel Mirowski at Sinai Hospital in Baltimore, was responsible for the creation of the implantable defibrillator.

Mirowski, a Jew, was born and raised in Warsaw. In 1939, as an adolescent, he left his family and fled his country after the German invasion and occupation of Poland. (He was the only member of his family to survive the war.) He ultimately returned to Poland.

After the war, he did his medical training in France. He eventually moved to Israel. In 1966, when he was already a practicing cardiologist, he experienced a life-changing tragedy when his close friend and mentor, Harry Heller, died of ventricular tachycardia, a malignant rhythm that is often a precursor of ventricular fibrillation. Like so many traumatized by sudden cardiac death, it became his lifelong obsession.

In 1968, Mirowski moved to the U.S. As chief of the new CCU at Sinai Hospital, he negotiated time to pursue his own work in the basement of the hospital’s research building. His project, conceived in Israel after Heller’s death, was to build an implantable defibrillator.

Mirowski paired up with Morton Mower, another cardiologist, and together they created a blueprint for the device. Mirowski knew that a strong electrical shock was needed to terminate ventricular fibrillation. However, he believed that with external defibrillation most of this energy was wastefully dissipated in the tissues around the heart. Mirowski wondered whether the discharge of a simple capacitor, which stores charge, might be sufficient to terminate fibrillation if the capacitor was in direct contact with the heart.

Working with engineers, Mirowski and Mower designed circuitry to detect ventricular fibrillation and trigger the charging of a capacitor by a battery.

The challenges were enormous: miniaturizing the circuits, constructing electronics to ensure the delivery of appropriate shocks (while avoiding inappropriate ones that could put patients into VF), and assembling a generator powerful enough to deliver multiple shocks.

The pair worked alone. They used their own money to pay for experimental animals and electrical components. At one point, they stole spoons from a nearby restaurant to make the implantable electrodes.

Mirowski had great focus and will. His “three laws” were these: Don’t give up. Don’t give in. And beat the bastards.

In Aug 1969, Mirowski and Mower put a metal catheter inside a dog’s superior vena cava and a metal plate — a broken defibrillator paddle— under the skin of its chest. With weak current, they induced fibrillation by stimulating the heart during the vulnerable period.

Then, with a single, much stronger 20-joule shock, they terminated the fibrillation and brought the dog back to life.

To publicize their achievement, they made a movie showing a dog first collapsing unconscious in cardiac arrest, then getting shocked by an implantable defibrillator, and finally standing up and wagging its tail.

When observers suggested the dog had been trained to fall and stand up, Mirowski filmed additional sequences with simultaneous EKG tracings to prove that his dogs’ hearts were indeed fibrillating.

The film convinced many doctors that Mirowski was onto something with potentially great clinical benefits. In the spring of 1970, Earl Bakken of Medtronic visited Mirowski to inspect his apparatus. Mirowski performed a successful demonstration for his guest.

Afterward, when Bakken asked what would have happened if the revived dog had not been defibrillated, Mirowski disconnected the defibrillator, put the dog back into ventricular fibrillation, and stood by as it quickly died.

In a monumental blunder, Bakken decided that Mirowski’s device was not commercially viable. Since sudden death is essentially random, he wondered how Mirowski was going to identify patients most at risk.

Bakken also wondered how Mirowski was going to test his device. Would he have to put people into cardiac arrest to see if his apparatus worked? (The answer was yes.) Was that even ethical?

So, Mirowski and his team continued on their own, undeterred and largely unfunded. On February 4, 1980, they finally did their first human test.

The 54-year-old California woman had had multiple episodes of cardiac arrest. In the operation, surgeons at Johns Hopkins implanted an electrode in her superior vena cava and sutured an electrode to the surface of her left ventricle. They inserted the generator into her abdomen.

Then, to test the device, they put her into ventricular fibrillation. The device did not activate at first. For 15 seconds, Mirowski and his colleagues watched as the woman went unconscious.

One shock was all it took to revive her. Though The New England Journal of Medicine had rejected Mirowski’s first paper on his animal experiments, it quickly published his experience with his first three subjects in a paper called “Termination of Malignant Ventricular Arrhythmias with an Implanted Automatic Defibrillator in Human Beings.”

And 5 years later, in 1985, the Food and Drug Administration approved the commercial production of the device. Today, 200,000 defibrillators are implanted into patients every year, saving countless lives. Mirowski did not live long enough to see how his invention would change modern cardiology. He died in 1990.

Sandeep Jauhar is the director of the Heart Failure Program at Long Island Jewish Medical Center. He is the New York Times bestselling author of three medical memoirs — “Intern: A Doctor’s Initiation,” “Doctored: The Disillusionment of an American Physician,” and “Heart: A History” — and a contributing opinion writer for the New York Times. His latest book is “My Father’s Brain: Life in the Shadow of Alzheimer’s.”