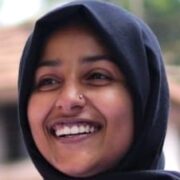 I am Afreen Fatima from Allahabad, India. My father has been unjustly and illegally arrested by Allahabad police. On June 10th, a protest was organized post-Jummah namaz against objectionable comments that were made about Prophet Muhammad. Following the protest was a clash between the police and protesters. Police then used this to punish, humiliate, and harass Muslim leaders and activists of the town who have been active for a long time in the city, my father being one of them.

At around 08:15 PM the police arrived at my house and asked my father to accompany them to the police station. My father readily agreed because he had been in touch with the local administration, and he himself was worried about the tense situation that was building up in the city between police and the Muslims. We were hearing about arrests and tensions that were happening, and my father was concerned about all that was happening. He was also concerned that it was going to be a one-sided inquiry and that Muslims would be punished. Muslims would pay the price. There was no warrant when he was taken away. No notice was given to us when he was taken away. Police just said they wanted to talk to him about what happened earlier.

At around 12:30 a.m., the police again came to our house and detained my mother and my younger sister, this too without a warrant, without any notice. They just said that they want to take them for some investigation. At this point, we still did not know that our father was being suspected or was being investigated. All we knew was that he went with the police on his own to talk about what had happened in the city. When my mother and my sister were being taken, the police were aggressive, they were intimidating, and they did not give my mother or my sister time to even process. My mother, sister, and the entire family were already anxious and stressed about why our father was taken away.

The police did not disclose where our father was or where our mother and sister were. Around 2:30 a.m., police again came to our house and asked my sister-in-law and me to accompany them to the police station. We refused to go with them, saying that it was late at night and it is illegal to arrest or detain women after 6:00 p.m.

In fact, the detention of my mother and my sister was illegal because, to detain females for any inquiry or any investigation, the police first had to get permission from the magistrate which was never obtained. When we refused to go with them, the police then started intimidating us into vacating our house. They said that they wanted to see our house and they wanted to lock it from the outside. We resisted and said that we will not be leaving our house.

I must again point out that we still did not know the whereabouts of my father, mother, or sister. The police stayed outside of our house until 11:00 a.m. the next morning and continuously pestered us and intimidated us to vacate our house. They did not give us a reason why; they did not tell us anything. Yet again, we still did not know where my father, mother, or sister was.

We tried to send family members to take my father’s medicine to whichever police station he was in, and also my mother’s medicine to whichever police station she was in. The lawyers were also not allowed to meet them, and it was just a very tense and anxious situation for everyone. We did not know what was happening. We did not know that my father was being framed as a mastermind of the violence and the clash that broke out after the protests.

Then around 11:00 a.m. on June 11th, we got to know that my father was arrested as the mastermind and one of the prime suspects. This is also something we did not find out from the police, but instead from sensational headlines on right-wing media channels. The entire day of June 11th was spent still worrying about where my mother and sister were and what the police were doing with them.

Then at around 08:00 p.m. on June 11th, we got a call from my mother who, in a very distressed and hurried voice asked us to vacate the house because the police said that they wanted to demolish our house.

We were not served any notice until then. It was at 11:00 p.m. when the police posted a notice on the main gate of our house saying that we must vacate our house by 11:00 a.m. the next morning. They said that the police and development authorities will then come and demolish it, citing that it was illegally constructed. We had never been given any notice before this particular notice, and in fact, even this notice was never given to us — it was just posted on our gate.

We had been paying our house tax, our water taxes, and all of our utility bills. Everything was registered on this house, and we had been paying all these taxes. We were never told that our house was illegally constructed or anything of that sort. We were never served any notice before this. This was just a way to punish my father for being an active local member of the Muslim community. I must point out that the house that was demolished is not my father’s house, it belongs to my mother. My mother pays all the taxes, my mother pays the water tax, the house tax, electricity bills, and everything else.

Allahabad development authorities were hand-in-glove with the law enforcement to illegally demolish our house. They then went on to fabricate things to incriminate my father and to also make me a suspect of the violence that happened in Allahabad.

It is an alarming trend that is being noticed in India where law enforcement, the government, and development authorities, arbitrarily, unjustly, illegally, and lawlessly demolish Muslim households. They also punish and incarcerate Muslims for no crime at all. The same thing has happened to me and my family. We are being punished.

There is collective punishment for the entire Muslim community which says that you cannot speak up, that you should not speak up, and that you should not be concerned about the rising intolerance against your community. They want Muslims to feel that they should not take a stand against laws like the Citizenship Amendment Act that is not just unconstitutional, but inhumane and violate all sorts of human rights.

The way the law enforcement has incriminated my father and the way that the right-wing media has portrayed my father points a finger in only one direction. That is towards some conspiracy that is being planned to punish the Muslims who are vocal, who are concerned about community issues, and who actively work to solve community issues. By punishing them, the government can teach a lesson to everyone in the Muslim community.

I urge everyone to not just speak up about this but to hold authorities and law enforcement and governments accountable for the arbitrary and lawless power that they exercise over Muslim bodies, Muslim houses, and Muslim lives.

The above remarks were made by Afreen Fatima on June 15, 2022, as part of Congressional Briefings series organized by 18 U.S.-based civil rights organizations.

Afreen Fatima is a former president of the students’ union of Women’s College, Aligarh Muslim University. She was at the forefront of the anti-Citizenship Amendment Act protests of 2019, protesting against the BJP’s anti-Muslim citizenship policy. She has also led protests against the Karnataka state’s ban on hijabs in schools. Due to her outspoken and unabashed criticism of Hindu nationalism and the Modi regime, her home was recently bulldozed by authorities in Uttar Pradesh.