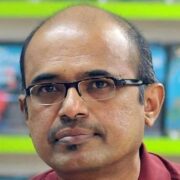 Yes, Usha Chilukuri is an Indian, But Not That Indian: Ohio Republican Senate Candidate Lays Racism Charge Against Cartoon

Sri Lanka has long been known or described as a Paradise. Hanging like a teardrop in the south-eastern tip of India, as if trying to cozy up to the big neighbor for support, the small island had lots that would qualify it as a paradise.

But for the last 50 years, it has gone through anarchy, war, destruction, and collapse of the state itself, and to add to it, nature’s wrath in the form of a tsunami. It is not something that we would wish upon any place with a Buddhist majority, since we believe that Buddhists are peace-loving people and have no ulterior motives in whatever they do.

But in Sri Lanka and neighboring Myanmar where Buddhists are a majority they have launched large-scale massacres of minorities. For that Sri Lanka with its Sinhala Buddhist majority has had a terrible unimaginable price to pay in a 25-year-war that threatened the destruction of the State itself.

It is in that battered Sri Lanka that Shehan Karunatilaka places his third novel which has now won the Booker Prize. An anarchic noir, the novel trawls the underbelly of a country at war with itself. The Sinhala state versus Tamil minority versus the anarchic Janata Vimukthi Perumana or JVP, and as if that was not enough, Tamils versus Muslims, Buddhists versus Muslims and various freelance and LTTE bombers versus each other and the State. For total anarchy, there could not have been any better Paradise.

“Chats with the Dead” (renamed and republished with some changes as “The Seven Moons of Maali Almeida” in Europe and America) is located in purgatory. This a great device by the author because the dead tell their tales to each other and the narrative moves between the past happenings “Down There,” interlaced with various happening in purgatory or “In Between,” where all the dead including the anti-hero, a news photographer Maali Almeida who has all the proof of killings and bombings and plane crashes; where activists, politicians and soldiers wait for their Ears to be checked before being pushed towards the Light. Dripping with sarcasm and anger, the novel is also a death certificate for Sri Lanka we knew not too long ago.

As readers, we are concerned not with ear checks but with history, and the narrative of the novel provides quite a few, especially the much-talked-about feud between the LTTE chief Prabhakaran and his then-deputy Mahata or Colonel Gopalaswamy. Many journalists are named with a slight twist to their names (including Anita Pratap who interviewed Prabhakaran for Time magazine).

When everything is anarchy, anything can happen as part of a daily routine. Maali had left behind some photographs and if any action takes place at all in the novel it is the search for the envelopes of damning films and photographs which are finally exhibited by two Tamil activists who are believed to be agents of Mahata operating under various names. Running parallel to this is homosexuality, since Maali is queer who between dangerous news assignments manages to find boys and even army men.

Finally, Maali pays the price for being queer when the father of his partner confronts him before killing him saying: “I didn’t send my son to Cambridge to come back and get AIDS from a queer.”

So what’s the deal in the novel? Well, even if Maali was not a queer, the novel would have worked, for it is a wonderful job of laying bare the underbelly of a Buddhist state that is a paradise for some, bombing yard for others, killing fields for the army, and everyone is part of one war or another. By placing his characters in Purgatory or “In Between,” Shehan tells us that Sri Lanka itself is purgatory for many, hanging between life and death or near death or after-death.

Totalitarianism on the Horizon: The Rise and Rise of Narendra Modi’s Morally Bankrupt India

“Being a ghost isn’t that different to being a war photographer,” the narrator says. Lanka has become purgatory but there is some hope:

“If you could end this war once and for all, what is the acceptable number of civilians?
None.
That is why this war will go on forever.
Nothing goes on forever. That is one thing Buddha got right.”

Was Shehan writing an obit for the Paradise that will never be and become a place where “lakes overflow with the dead”?

In war, there are no winners. But any Paradise has its time. It becomes purgatory and then hell. Only a novelist can see that. This surreal and frightening novel about the death and purgatory of a news photographer and an island nation will keep us awake for long, thinking about what fate awaits its bigger neighbor up north.

Binoo John is a senior journalist and author based in New Delhi. He was the literary editor of India Today and Mail Today. He also conducted the Kovalam Literary Festival where Shehan Karunatilake was first introduced to an Indian audience in 2011 after his debut novel “Chinaman” was published to wide acclaim. John has just released his latest book on sporting excellence titled “Top Game: Winning, Losing and a new understanding of Sport.”