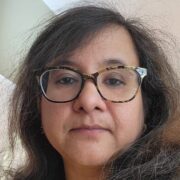 Even since the Trump administration rescinded its draconian order that would have impacted over 200,000 Indian international students, it is already late for deeper soul-searching. The student community forms the bedrock of the diaspora; and the vibrant South Asian diaspora community in the U.S. is generationally and primarily composed of former international students and technical workers. During a time of volatile and questionable immigration policies, it is crucial that the South Asian American diaspora becomes critical of its politics of solidarity aligned along indices of identity categories.

I am left wondering of the nature of diaspora consciousness, especially trying to link the visibility of international students in the diaspora along with the suspension of work visas such as H-1B, L1, etc., to the spate of advocacy and solidarity statements in the context of civil society movement, such as Black Lives Matter (BLM). Are those in the diaspora, who get impacted, including families overseas, students and diaspora populations here, only feel implicated when their aspirations and livelihoods come under direct threat? I remain critical of the gestures that contemporary diaspora communities from South Asia have shown, albeit selectively, about the many atrocities that could be connected to the BLM, but remained strategically absent from their public gestures.

Looking to the completion of the first term of the current U.S. administration, BLM and its current momentum may not have been totally unpredictable. Trump started his presidency with the Muslim ban, followed by his controversial comments about African countries and the citizenry therein. In fact, the current dispensation makes no qualms about its stance on immigration, foreign policies, and its political perspective on race relations. Surely the state of democratic crises witnessed in the continual onslaught of Black people, with an utter disregard to their humanity, it was almost certain that the civil society-based outrage and movement of the scope we are seeing in the U.S. was all but coming.

For the South Asian community though, there was a marked dissonance in siding with the current administration. During the Muslim ban, there were few significant South Asian Diaspora organizations (SAALT is an exceptionally inclusive and progressive body, but not the focus here) or communities raising their voice or protesting the inhumanity of the ban. “Indians for Trump,” “Hindus for Trump” and other celebratory gatherings saw a full-fledged participation from the diaspora community.

Afterall, a significant number of Indians in America belong to the right caste, right religion, right region, and the right class. So, of course, the Muslim ban did not arouse any amount of righteous indignation. In fact, as an assimilatory and pragmatic tactic, it seemed to be the right thing to do. According to mainstream media and socio-cultural stereotyping, Muslims were the enemy, affiliated to only terror and terrorist networks across the world. The alignment in identifying the common enemy worked well for the South Asian American. While silence in the diaspora and complicity to Islamophobia in it can reap benefits and help quick assimilation, what about being vocal in the original homeland?

Thereto, in characteristic fashion, the South Asian American remains a casual bystander. News of lynching of minorities, escalated by an emboldened rightwing presence did not speak to the mostly upper caste Hindu diaspora from the subcontinent. Muslims were getting killed for being human or just for being plain Indian Muslims. The provisional statehood of Kashmir, the only Muslim majority part of India, was revoked in a swift autocratic move, disconnecting the valley from media, people, and any criticism. Still, Indian Americans felt more protected and privileged under Trump.

Following Trump’s draconian Muslim ban laws, upheld by U.S. courts, his administration also initiated its ICE detention camps with immigrant children dehumanized, separated from their parents, lodged in cages across the U.S.-Mexico border. As if taking close to a model, Muslims in India started protesting the stringent citizenship laws of NRC-CAA from the current Modi-Shah regime. Here too, righteous South Asian American community members, for the large parts, remained missing in action, many choosing to mistakenly hold on to the belief  that South Asians are seldom illegally present in the U.S., justifying the detention and inhuman cruelty meted out to migrants and asylum seekers at the border.

No solidarity statements went out. In fact, the few incidents of Indian origin migrants proved the exceptionality of the illegality of Indians here. Both countries, political systems, and the diaspora community itself succumbed to the internalization that governments decide on a human’s legality, and that the status of illegality made a person more or less human. In the meantime, detention centers were in construction in India, primarily meant for the marginalized, for the people who did not make the ranks of citizenry after falling out of the NRC list.

With its complicit posturing to U.S. majoritarian politics aligned with far right Hindu political systems, the South Asian (Indian) American diaspora has been largely insulated against the ongoing atrocity on minorities, including its anti-Blackness and Islamophobia. As tacit bystanders, in our complicity with white supremacy, how can Black Americans take our solidarity statements for real? Instead of a mere performative posture and a fashionable or a strategically right thing to do, how can South Asian solidarity statements remain meaningful for changing Black lives and for perceiving experiences of Blackness through empathy and compassion, through honesty and self-introspection?

Without realizing their complicity with Islamophobia, minority oppression within our own, including those based on caste, a conscientious presence and an ethical positioning is not possible. Without recognizing our own cultural myopias, these BLM statements remain performative gestures — selective outrages that make us visible but not ethically vocal.

Aparajita De is in higher education, teaching courses on global and diverse literatures to college students in the University of the District of Columbia. She is transitioning from scholarly and academic writing to nonfictional writing in search of a more authentic voice for herself.