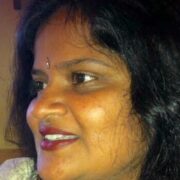 Bold, brutally frank and bright, are the three adjectives that sum up Nikita Gill, whose success in creative arts is reaching new heights. A poet straddling the two diametrically opposite cultures of Britain and India, Nikita is a great example of the new generation of ‘global’ poets that bring shades of diversity into their work.

She is one of the success stories in the global trend of self-made artists. Presenting her works on social media like Instagram, Tiktok, and Tumblr, Nikita is now poised to head into the mainstream audio-visual media.

Transcending social media, her novel in verse, “The Girl and Goddess” will soon be on television. None other than Lena Headey, who plays Cersei Lannister in the “Game of Thrones” series will be adapting her work on TV.

It’s not a surprise considering that Nikita already commands over a million fans worldwide for her poetry, including celebrities like Khloe Kardashian, and Sam Smith. Today, she even has fans tattooing her poems on themselves!

Hers has not been an easy claim to fame. Receiving over 100 rejection letters from publishers that would have discouraged anyone else, Nikita’s perseverance gained her a publishing contract and has now published seven collections of poetry.

Born in Belfast, Nikita grew up in New Delhi, moving back to Britain to get her master’s in book arts and publishing at the university for the Creative Arts in Kent.

At a rate of one every year, she published “Wild Embers: Poems of Rebellion” in 2017 and “Fierce Fairytales: Poems and Stories to Stir Your Soul” in 2018. She also published two collections, “Great Goddesses: Life Lessons from Myths and Monsters” and “Your Heart is the Sea” in 2019.

They were followed by “The Girl and the Goddess” in 2020 and her latest, “Where Hope Comes From: Poems of Resilience, Healing and Light” in 2021.

Turning her own life experiences into poetry, this Hampshire-based poet’s works have been an inspiration for many a reader. In her bold poem “Your Ruins,” she declares:

“there is nothing worse
than ruing yourself for people
Who aren’t worth it.”

Much-needed encouragement reigns high in her poem for the majority who are still troubled by body shaming. Nikita says in “Tell your daughters.”
Tell your daughters how you love your body
….
Tell them never to listen when bodies are critiqued
Tell them every woman’s body is beautiful
Because every woman’s soul is unique.”
Perhaps nothing portrays her personality better than her poem ‘Wolf and woman’ that shows her emerging from her inner struggles-
“Some days
I am more wolf
Than woman
And I am still learning
How to stop apologizing
For my wild.”
Her poems are definitely an inspiration and as she herself intends, her poems will continue to free many a reader from the shackles of social servitudes.
More mature readers looking for deeper meaning, are poems like ‘Show me our soul’
“Show me
The most damaged
Parts of your soul,
And I will show you
How it still shines like gold”.

However, Nikita’s work is not confined only to poetry. She has written short stories, and a play “Maidens, Myths, and Monsters,” which she herself performed.

Like many a contemporary poet, Nikita’s introduction to the world happened through social media. A blog, saw her work shared over 7,000 times, and then she launched onto more popular platforms that can make or break an artist.

In this case, Instagram and Tiktock made Nikita. Her poetry appealed to many a reader looking for hope, courage, and inspiration. The young loved her bold renditions that speak unabashedly of hitherto taboo subjects like periods.

In “Even Princesses and She Wolves Bleed” Nikita declares:
“Imagine the holy river we bring to life every month
Was treated with the prayer and worship it deserved….
Think of a world where your period was not a thing of murmurs…
Imagine a world where your period is normalized.”
This topic while it finds encouragement in her poem, Nikita does not hold back when she addresses men with the same subject in the poem “Period.”
“At the mention of the word ‘period’
I watch him pale and look away.
At this I wonder
When did this world become such a place
That men are embarrassed
By the most natural function of a womb
When they had once called a womb home.”

Anuradha Gajaraj-Lopez, who lives in Clovis, California, is a journalist, author and poet. Her collection of poetry “Divine Blossoms: Call of The Inner Voice, A Collection of Inspired Poetry” was released in August 2020.