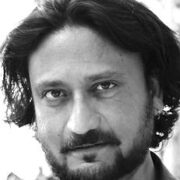 This review could very well end up becoming a frivolous ploy. The book is an anthology – a showcase of outstanding writers flexing their muscles. Each one of them in this hardbound volume represents thoughts spanning over 200 years of Indian history — each writer possessing a body of work worth a lifetime of reading. From Henry Louis Vivian Derozio — at the turn of the last century — to Pankaj Mishra — at the turn of the next — a wide range of topics and tales make up for the collection that in its sheer depth could only be comparable to a gallery depicting greatest painters of a similar expanse of time and diversity. While nobody can and should ever confuse this book to be a how-to manual for anything, it certainly serves as a veritable delight for prose lovers everywhere.

“… this Age of Nationalism, of gigantic vanity and selfishness, is only a passing phase in civilization, and those who are making permanent arrangements for accommodating this temporary mood of history will be unable to fit themselves for the coming age when the true spirit of freedom will have sway.” Rabindranath Tagore writes in his essay, “The Nation” published in 1922.

In “The Book of Indian Essays: Two Hundred Years Of English Prose” compiled and edited by Arvind Krishna Mehrotra, there are numerous nuggets of thought like the one above that could have very well been relevant at randomly various times in history. As you go about reading the essays, chronologically organized; the question of the pieces holding up a mirror to the prevalent period in which they were written becomes increasingly non-consequential. While some lament the days gone by, a few criticize the opportunities lost and others describe the scents and sounds of a memory or a dream.

The anthology refreshingly stays clear of playing to the masses. It has no Salman Rushdie, it has no V.S. Naipaul, neither Jhumpa Lahiri nor Arundhati Roy, names today’s generation of South Asian connoisseurs of literature expects to see in an anthology celebrating English writers of the subcontinent. At the same time, it certainly isn’t for a light pre-siesta reading on a Sunday afternoon. It has the writings of Tagore, Ramachandra Guha, R.K. Narayan, Nissim Ezekiel, Amitav Ghosh, and many important names from India’s literary world, including Jawaharlal Nehru. If you appreciate prose that surprises, amuses and paints the picture of a time long gone; of distant people and places, this anthology will not disappoint. Also, the average American reader will not miss the ubiquitous additional vowel and the use of s in place of z.

Essay as a literary form was born out of the renaissance and a craving for a new genre of writing that spoke more of the self, reactions and our perceptions. “The Book of Indian Essays” definitely has no pointed subjectivity of Montaigne’s Essais (1580) or the impersonal directness of Francis Bacon’s Essays (1597). What you certainly can expect in Mehrotra’s anthology is a blend of sentiments and sensibilities of an Indo-Western nature, a majority of them set against a colonial backdrop. For that matter, many of them were not originally meant to be written as essays.

As the editor Mehrotra notes in his preface, “…the essay flits between genres. It can come disguised as a story, as with Ruskin Bond; or appear as an obituary, as with Ashok Mitra; or take the form of a weekly shopping list, as with Shoshee Chunder Dutt; or be a book review…” Yes. Two book reviews have made it to the collection, too. Nissim Ezekiel’s review of “Naipaul’s India and Mine” and Sanjay Subrahmanyam’s “Another Booker Flop.”

Contrasts and comparisons do take over your reading in between the lines. If Shama Futehally luxuriates in the pleasantness of the March hibiscus bush, the magpie robin and the jacaranda in Delhi; Anita Desai talks about the Indian woman and the fine art of secretly conniving her own oppression. Mukul Kesavan lampoons the mustachioed desi man and his thick band of rotting pink threads while the fragrance of red chilies in the Calcutta of Chitrita Banerji’s Patoler Ma is all about pleasing the tastebuds. Dharma Kumar writes succinctly about the 108 varieties of English in India.

Ashok Mitra’s Ordinary Man is the death of a malnourished Homeopath. M. Krishnan talks about the killer Bull in The Jellicut. Aubrey Menen’s “My Grandmother and the Dirty English” is a chapter from her holiday in Calicut. The abundance of characters and characterizations add to the wide array of stories we hear. Two good examples are R.K. Narayan’s rather quick death of an elephant and Buddhadev Bose’s friendship with American writer Henry Miller and his impressions of the Big Sur. Chapters from books have been presented as essays too. Madhur Jaffrey’s winter evenings in Delhi with her joint family are taken from her “Climbing the Mango Trees.” The other is from Santha Rama Rao’s “Home to India.”

The Colonial and the Colloquial

One of the most endearing aspects is the abundant use of various dialects and native languages. Indian English cannot be completely devoid of the regional tongue. The reader is often reminded how delightful the rich flavors can taste when it’s blended in a precise measure. In the “Street Music of Calcutta” by Shoshee Chunder Dutt, Kooar-Ghotee-Tollah, Poorana Kagoch and Chye Malsee Dohi paint the cries of the street hawkers. In “The Benares that Was” by G.V. Desani, the arati offered at the Visvanatha Temple goes, “tan dhik tan dhik… dhinaka dhinaka…hariharaho…trisuladhariho…” Qurratulain Hyder comfortably traverses between English and Urdu, Sara Rai between English and Hindi, Buddhadeva Bose and Nirad Chaudhuri between English and Bengali.

The sources are many and the inspirations varied but the essays do serve the purpose they were originally meant to do. They don’t need to be read in any particular order or with special affection. They can be read in random and almost with disinterest until you hit upon a stroke of brilliance that forces you to go back and read the sentence, paragraph, or page, or perhaps, the whole essay again. There are more than many places at which a reader may want to revisit an essay or several lines of one. Describing Rabindranath Tagore at Oxford, Hasan Shahid Suhrawardy writes, “when he first spoke to me, I was struck by a certain discrepancy between his appearance, on which nature had showered her most exquisite gifts of beauty and dignity and his voice, which did not seem to belong to his magnificent exterior.”

In “The Three Faces of an Indian,” Victor Anant writes, “My generation of Indians was born when the independence movement was just gaining momentum, between 1925 and 1935. We were bred through an interregnum of frustration, dissension, prolonged suspense and struggle.”

This pioneering collection has 45 essays, reviewing each would probably make an anthology by itself. Each writer opens a pathway to a different world and time. The reader has the power to enter a portal to explore the specific world in-depth or pause, ponder and skim over to the next. Like how you would go back and play a rare vinyl of classical masterpieces, you would want to keep this book close to go back and read again.