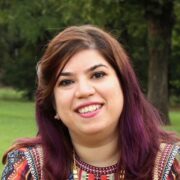 “But Kamala is a Hindu?! How can I support her!” These words uttered by a supposedly educated woman whom I have known for years and had never imagined to be xenophobic. What’s worse is that this is not the first time I have heard such a comment. May Muslims have expressed similar sentiments ever since former Vice President Joe Biden announced Sen. Kamala Harris as his running mate.

And each time I hear or read it I am truly perplexed. As a Muslim I have seen first hand since 9/11 how many of my faith have been treated. We have been put down, beaten, accused, been unfairly locked up and have faced so much negativity. We are a community painted as terrorists and oppressors. We balk at the idea of this treatment

and have spent years building bridges, inviting others to see us in the mosques, and have dialogue. I certainly don’t appreciate how Muslims are incorrectly portrayed, so then, how can other Muslims justify this dislike of Kamala?

I had to look into this because it is fascinating how people justify their negative thoughts. I took it upon myself to ask around in my community and see what are the reasons for such negativity. “She supports Modi and his treatment of Muslims in India,” said Nabeela, a middle aged Pakistani woman who is the mother of two. “She’s a Hindu and will always side with India,” she argued. When I corrected her and said that Kamala is not a Hindu but a Baptist Christian, she brushed me off. The fact that she grew up in a mixed household and was taught both Hinduism and Christianity is an anomaly to many.

The label of ‘Hindu’ would not have been a problem a few years ago. But with India’s Prime Minister Narendra Modi showing open support for Donald Trump, who has put into place policies that target Muslims, along with Modi himself garnering negative light with his citizenship exam targeting Muslims, it’s a case of guilt by association. Even though Kamala is not a Hindu, she is half Indian and that is justification enough for many to lump her with other Indians, and to unfairly assume that she follows the policies of Modi.

Another reason is the  worry that Kamala’s husband  happens to be Jewish. He and Kamala both  spoke at and supported AIPAC.This concerns Muslims because to date there is no resolution for the crisis between Israel and Palestine. The Jewish Star called Kamala, “a staunch pro-Israel Liberal.” It’s statements like these that worry Muslims because they feel they will not play a role in the American foreign policy, in my opinion the Israeli-Palestinian Conflict is one of the biggest reasons the U.S. is viewed unfavorably by Muslim nations. Muslims who vote need to realize they can hold their elected officials accountable, and can press them to give proper attention to a concern they have.

An article in The Jewish Political Guide says Sen. Harris is a supporter of the two-state solution to the Israeli-Palestinian conflict. And the same article states, in response to Israel’s decision to ban the entry of Democratic Congresswomen Ilhan Omar and Rashida Tlaib, Sen. Harris criticized the decision, and tweeted: “I don’t believe any nation should deny entry to elected Members of Congress, period. It’s an affront to the United States. Open and engaged foreign relations are critical to advancing U.S. interests.” I have cited these very same sources to multiple people, some have changed their minds and others did not.

One final issue that Muslims really fear is the whole issue of Kashmir. Muslim voters believe that Kamala will side with Modi and declare Kashmir as part of India. Ghazala Khan, a Kashmiri Muslim, who is very much against Modi’s policies and called to boycott the combined Trump and Modi rally in Houston last year, is now listed as a representative for the ‘Muslims for Trump’ group. Her only reason for this change — “being a Kashmiri, I [would] not vote for an Indian.” Statements like these are almost dangerous and lack of conviction.

This argument can be disproved easily. In October 2019, Sen. Harris weighed in on the situation in Kashmir after the Modi government’s Article 370 move, saying, “We have to remind the Kashmiris that they are not alone in the world. We are keeping a track on the situation.”

Some things to keep in mind are that Muslims are a new immigrant group, with their history in this country limited to less than 100 years. Many of whom are first generation immigrants and still have different expectations of the democratic process. Due to their personal experience with corruption in their home countries, many end up feeling a sense of cynicism towards elections. It is the reason why a majority of them question the need to participate at all.

However in my opinion, Muslim Americans are one of the fastest growing populations. Many are choosing to not sit in the sidelines, examples include Congresswomen Rashida Tlaib and Ilhan Omar. They now advocate for causes that are important to Muslims. They are organizing at the grassroots level and participating in the political process. If things go this way then the Muslim vote will be a block to watch for in future elections.

According to Pakistani newspaper Dawn, Sen. Harris, as an African American woman, born to immigrant parents, personifies the values of diversity that most Pakistani-Americans advocate. So, let’s embrace this woman who is closer to us than any candidate has ever been and who will pave the way for our children for generations to come.

Farheen Raza is the host of  “Authentic & Unfiltered” podcast and “Real Talk with Farheen” on Radio Caravan. She has earned the reputation as a fearless communicator that isn’t afraid to talk about topics that everyone is thinking about, but not addressing. Through her talk show and podcast platform, Farheen raises awareness on issues that are important to women, family and living your best life. She’s not afraid to cover topics that are considered taboo. Farheen has appeared in multiple radio, TV shows and most notably at rallies to show support for topics related to equality. Find more info at www.FarheenRaza.com